We were shooting prairie dogs when it happened, thank God. My Winchester Model 70 .222 Remington made an anemic "pop." We opened the bolt and saw no daylight through the bore.

"Dud," my partner said. "Did you get oil on your primer?"

"I don't think so." I'd been handloading for about 10 years and observed the usual precautions.

"I'll bet you forgot the powder."

"Impossible," I replied, already beginning to doubt that assertion. I was a careful reloader, prided myself in doing things right and to date had never produced a bum cartridge. Some had been too hot, some inaccurate, but none a complete dud. We found a cleaning rod in the truck and pushed out the bullet. My partner began shaking my remaining cartridges close to his ear, one by one.

"Sounds empty," he said, handing me one of the little cartridges. Sure enough, it did. So did three more. "You missed a row," he said.

Indeed I had. As I thought things through, I realized I'd been pressed for time while loading for this shoot, constructing the last two boxes in record time late at night – ideal conditions for screwing up. I shuddered to think what would have happened had those "primer-only" rounds been fired at coyotes. In the heat of hunting, I would likely have bolted home a follow-up shot and pulled the trigger before fully considering why the previous shot had sounded "funny." The result would have been explosive, to say the least. 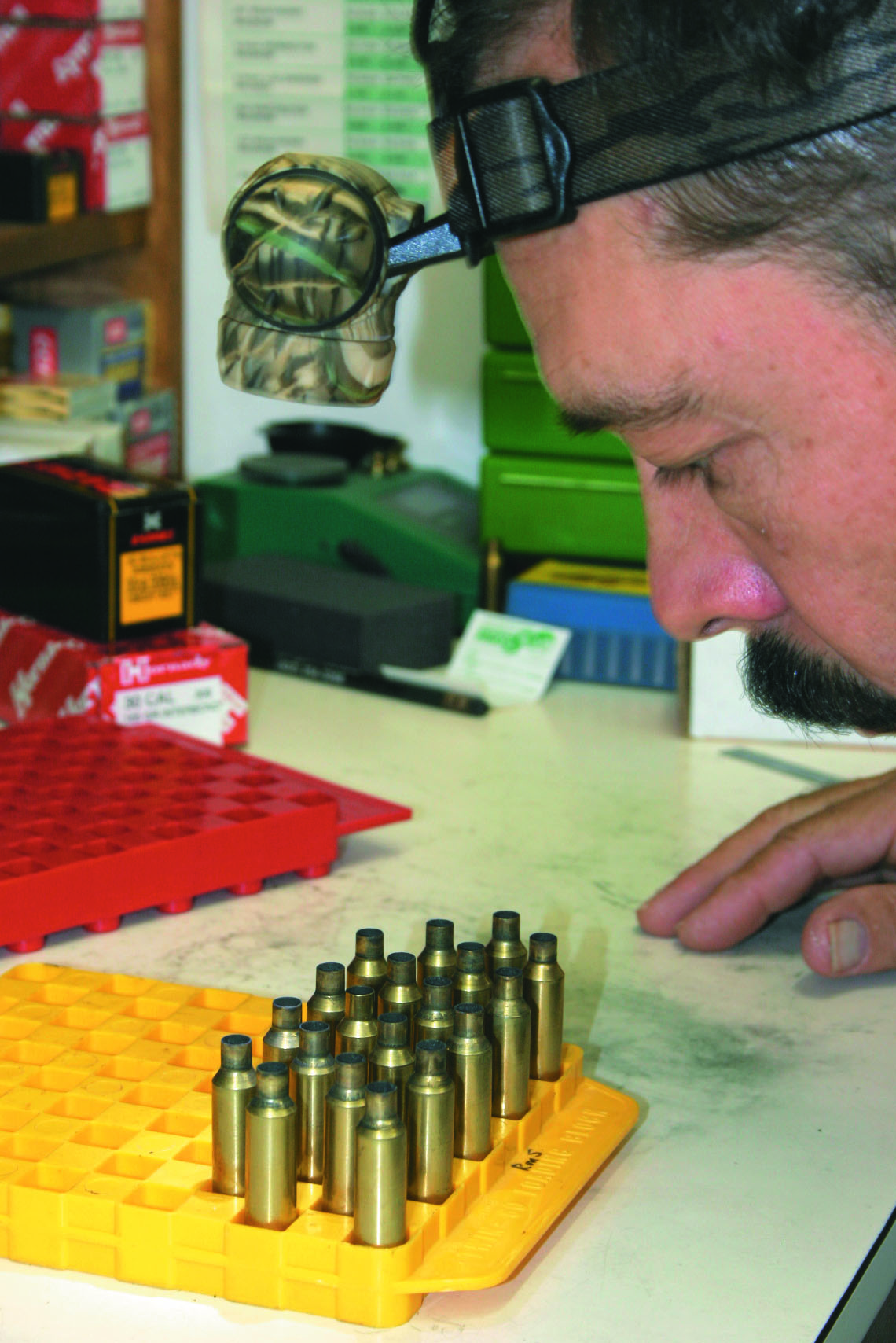 Folks, it is more than just a good idea to check all handloads for proper powder levels before seating bullets – it's critical. As illustrated above, forgetting a charge can lead to a classic obstructed barrel explosion. Double charging fast-burning powders can have nearly as dangerous results. You must check, then double check all cases before seating bullets.

Develop a routine for this. One route is to charge a block of cases, then look into each to see that powder levels are consistent in all. Room light is usually adequate for this, but a flashlight is a better option. I've been using a small LED Kimber headlamp that swivels to aim right where I'm looking. With it on my forehead, I slowly swing my head over each row of cartridges, positively identifying powder levels in each case. This isn't rocket science, but I insist on silence in the room while underway. No music or radio news, no friendly conversation with my daughter. Multi-tasking in middle- age isn't as easy as it was at 20. This job is too serious to screw up.

A second option is to have a second person check levels. The simple fact that they haven't been involved in charging the cases makes them, perhaps, a bit more attentive. Besides, they're probably secretly hoping to catch and punish you. It's the disciplinarian in all of us.

A third option is the charge, check and seat route. You measure or dump the powder charge, immediately check the level and seat the bullet. The downside to this is that you don't have other cartridges and their powder levels against which to compare. This isn't usually a problem with full rifle loads (say, powder to the shoulder) but can be with lighter loads hiding halfway down a narrow necked case.

Whichever safety check method you choose, stick with it, practice it religiously, and consider doing it twice for each cartridge. Better safe than sorry. And remember that stick powders sometimes hang up in powder measures. If you're dumping instead of weighing each charge, there is the potential to go several grains light on one load, then several grains over on the next. Get in the habit of rapping the powder measure handle sharply on the downstroke several times. And continue those visual checks – always.