When Winchester introduced the .243 Winchester in 1955, it quickly became a best-selling sporting cartridge. In the past 63 years, it has been chambered in a huge variety of rifles and actions from dozens of manufacturers and is consistently one of the most reloaded rifle cartridges. It is versatile, serving as a top-notch, flat-shooting varmint cartridge or as a big-game number capable of cleanly taking deer, antelope and similar game, all while offering modest recoil and excellent accuracy. 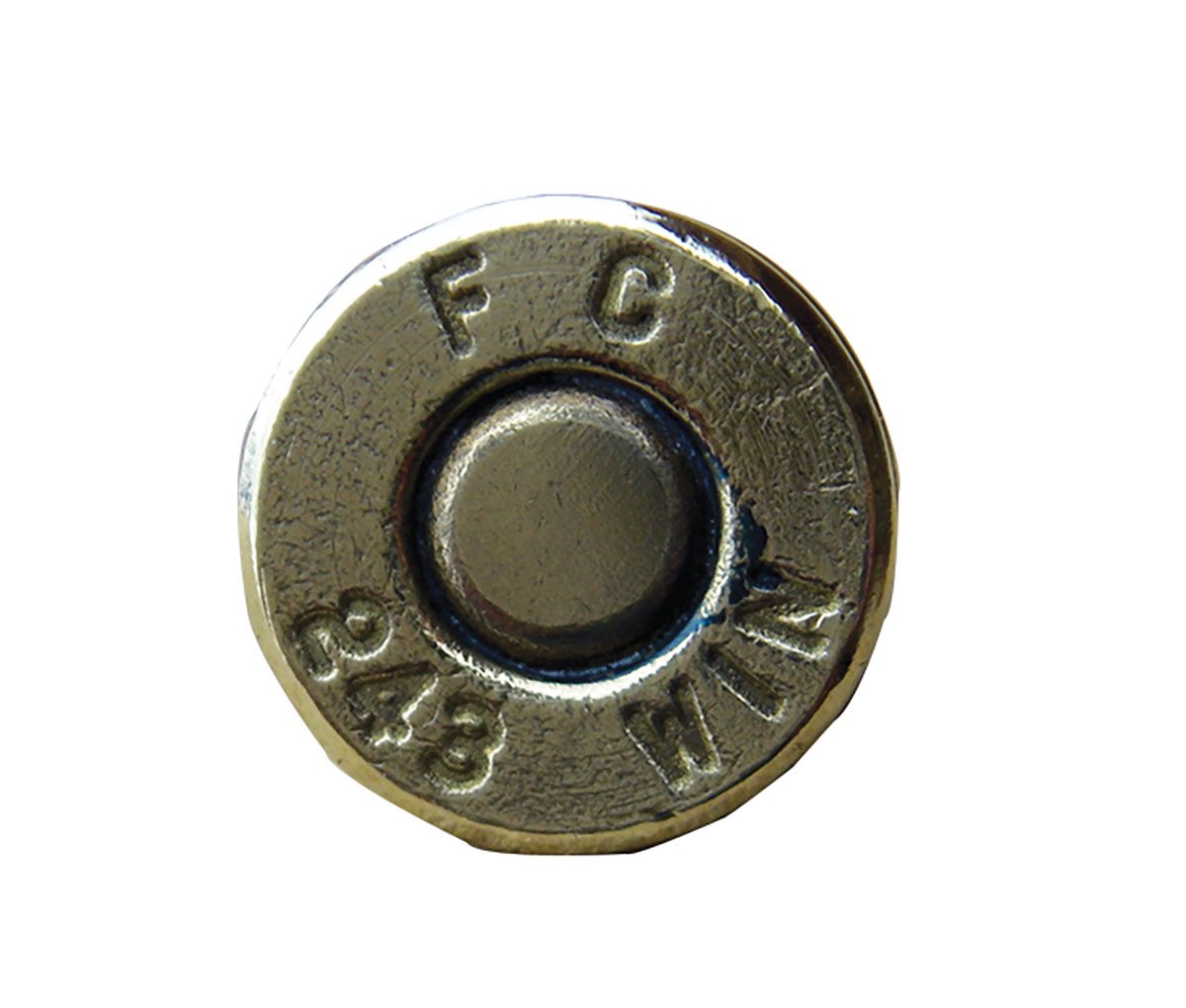 The history of the .243 Winchester probably begins with the 6mm Lee Navy cartridge (aka .236 Navy, “Ball Cartridge, 6mm,” 6mm U.S.N.) as introduced by Winchester during 1894, and in 1895 in the Lee (straight pull) rifle that utilized .244-inch bullets. In spite of being tested extensively and even adopted by the U.S. Navy and Marines from 1895 through 1899 (with some sources indicating 1902), it was a cartridge that was ahead of its time, which largely doomed it. For example, barrel steels were not resistant enough to erosion to offer long life, and period smokeless powders could not take advantage of the high-velocity potential the small caliber offered, which resulted in excess barrel fouling that was reported to cause erratic pressures. Nonetheless, there was considerable experimental work by Winchester and the government as to barrel twist rates, velocities, bullet weights, profiles, etc. This all set the stage for the .243 Winchester. (With small modifications, the 6mm Lee Navy was the parent case for the .220 Swift that Winchester introduced in 1935.)

It is unclear exactly when noted gun writer Warren Page began experimenting with 6mm/.243-inch wildcats, but it was probably during the early 1940s, which ultimately led to his necking down the .308 Winchester case shortly after it was introduced in 1952. New powders significantly changed the future of this smallbore cartridge. Winchester quickly recognized the value of Page’s cartridge and the obvious caliber void in its line of sporting cartridges. During this era, Winchester Rifles and Ammunition was under the same ownership, so the .243 Winchester was introduced in the Model 70 rifle. Rifle and ammunition sales were strong. Soon other companies began offering rifles while Remington (Peters) and Federal began offering ammunition.

The .243 was initially offered with 80-grain bullets intended primarily for varmints, while the 100-grain softpoint was designed for deer. Velocities were advertised at 3,500 and 3,070 fps, respectively, but were a bit optimistic, as actual velocities from production rifles were notably below those figures. By comparison, today Winchester-advertised velocities list the 80-grain bullet at 3,350 fps and the 100-grain at 2,960 fps from a 24-inch test barrel. Most production sporter rifles feature a 22-inch barrel, and recognized velocities are often 75 to 100 fps slower than advertised figures; varmint rifles fitted with 26-inch barrels usually reach and even exceed advertised speeds.

Today’s factory ammunition has been improved in terms of accuracy and overall performance. Perhaps what has improved most are the specialized loads that are tailored to maximize performance for a large variety of hunting applications. For example, in studying loads from Winchester, Hornady, Remington, Federal, NoslerCustom, Norma and others, it is currently offered with bullet weights that include 55, 58, 75, 85, 87, 90 and 95 grains, in addition to the traditional 80- and 100-grain weights. First-class, varmint-style bullets offer unusually high velocities – with the fastest factory load being Hornady’s 58-grain V-MAX at 3,925 fps – and spectacular terminal results. Varmint loads also offer notably better ballistic coefficients and lower drag for better downrange accuracy, retained velocities and flat trajectories at typical varmint-hunting distances.

Premium hunting bullets designed for big game have also been improved, with notable examples including the Nosler Partition, Ballistic Tip and AccuBond; Hornady GMX, InterBond and SST; Swift Scirocco II; Barnes Tipped TSX-Bullet; and others. Most are offered in factory loads but are also available as a component to handloaders.

After serving in Vietnam during the 1960s, one of my older brothers returned home and gave my father a new Remington Model 700 .243 Winchester with a state-of-the-art 3-9x variable scope (relatively new at that time). It became one of our most used rifles on the ranch for taking coyotes and pests but was also used for deer and antelope hunting. Although my dad and older brothers used it, I was the one most responsible for its substantial barrel wear. It was an excellent long-range cartridge for coyotes.

During the late 1970s, I acquired a pre-’64 Winchester Model 70 Varmint so chambered. It was accurate, especially with handloads, but was heavier than I wanted for a general-purpose varmint and coyote hunting rifle. Around 1982 I had a Winchester Model 70 Featherweight action custom built with a 261⁄2-inch No. 2 contour Douglas barrel; it proved capable of 1⁄4-MOA accuracy, which was uncommon for that era using common hunting bullets. It became a favorite general-purpose pest rifle, but for no good reason it was set aside to try other cartridges, loads and rifles. Although the above .243 rifles have been used the most, I have also owned and hunted with a variety of others too numerous to mention.

Having observed the .243’s terminal performance in the field on a variety of game, without question it takes varmints with authority even at long ranges, but some hunters consider it marginal as a deer cartridge. Some of the early cup-and-core bullets didn’t offer outstanding performance, which is probably where this unjust reputation originates. With modern hunting bullets, it is quite reliable on deer-sized game. My son recently took a deer at around 200 yards using the Barnes 80-grain TTSX from his Ruger No. 1. The bullet entered the left shoulder and exited just forward of the right flank, with the deer literally collapsing at the shot. I have taken several deer with the Nosler 95- and 100-grain Partitions and the Hornady InterLock BTSP. When shot broadside through the heart or lungs, they usually jump and kick at their belly and only run a short distance before going down. This type of performance is typical when the .243 Winchester is stoked with great hunting bullets. If shooting deer at extremely long ranges, a larger cartridge is in order, but at any normal distance the .243 is a very capable deer cartridge.

Winchester and practically all other rifle manufacturers use a one-in-10-inch barrel twist, which allows bullet stabilization for a wide variety of bullet weights that typically range from 55 to 100 grains. Remington is the primary exception, as its barrels feature one turn in 91⁄8 inches. As a result, Remington rifles sometimes offer mediocre accuracy with lightweight varmint bullets, and I have heard a couple of reports of bullet breakup due to the combination of the fast-twist barrel and lightly constructed varmint bullets pushed to high velocities and resultant high rotational speeds.

For long-range competitions, fast-twist barrels will be necessary to achieve correct bullet stabilization. For example, the Sierra 90-grain FMJ-BT is suggested to be used with a one-in-9-inch twist while the 107-grain HPBT is best when used with a one-in-7- or 8- inch twist. Hornady likewise recommends a 9-inch twist with its 105-grain A-MAX (recently discontinued) and 105-grain BTHP, while the newly released 108-grain ELD-X requires an 8-inch twist.

Two of the most common mistakes when assembling .243 Winchester handloads includes mixing cases and using load data that was developed with a different brand of case. The .243 typically utilizes powder charges that are between 29.0 and 45.0 grains (although a few charges approach 50.0 grains). Case capacities have been found to vary by over 4.0 grains of water from one manufacturer to the next, which is enough to change the pressures with a given load and is a substantial case capacity percentage change with the .243’s modest powder charge weights. In other words, if a load was developed in a Norma case that holds 56.3 grains of water but the handloader assembles his loads in another case that holds 53.3 grains of water, pressures can jump significantly.

For reference, 1960-era Winchester SUPER-X cases were measured with a water capacity of 55.6 while more recently manufactured Winchester cases measured 54.2 grains. Early Peters cases held 54.9 grains while recently manufactured Remington cases held 54.2 grains. Several 1970’s Hornady
Frontier cases held 54.4 grains while currently manufactured cases held 54.7 grains. NoslerCustom cases held 55.0 grains, and Federal Cartridge cases held 53.3 grains; these were chosen to develop the accompanying data. The smallest capacity cases held 51.8 grains of water (manufactured in Canada by a now-defunct company). To keep pressures from behaving erratically and to achieve the best accuracy, loads should be assembled in cases that are from the same manufacturer and preferably of the same lot number. To obtain uniform results when measuring capacity, all cases were once-fired, full-length sized using an RCBS die, trimmed to 2.040 inches and primed (to hold water). Each case was then weighed, filled with water level with the case mouth and weighed again, with its “dry” weight being deducted from that figure.

Current industry maximum average pressure for the .243 is 60,000 psi. Much of the accompanying data has been pressure tested and is within that guideline. Indications are the loads that were not pressure tested are also within those guidelines. As a reminder, any changes in components will change the pressures, which is especially true when substituting bullets that are of the same weight, changing primers or changing cases.

The .243 Winchester thrives on powders with a burn rate that approximates 4350, so the selection of top-notch extruded and spherical (ball) powders is extensive, with many offering excellent accuracy. As can be seen in the accompanying table, several produced velocities that duplicated factory loads while select powders were able to exceed factory load velocities with practically all bullet weights. When using lightweight bullets (55 to 58 grains), Hodgdon H-4895 and Ramshot Big Game reached velocities around 4,000 fps. Big-game hunters who use 80- to 100-grain bullets will be pleased with the velocities produced by Accurate 2700 and 2520; Hodgdon SUPERFORMANCE, H-4895, Hybrid 100V, Varget, H-4831sc, H-414, Winchester 760, IMR-4350, IMR-4320; Alliant Reloder 17, Power Pro 4000-MR or Ramshot Big Game and Hunter.

Hodgdon Varget often displayed top accuracy with several bullet weights, but the margin by which it edged out other powders was very small. Accurate 2700 and 2520; Hodgdon 4895, H-4831sc, IMR-4895, IMR-4320; Alliant Reloder 15 and 17; Ramshot Big Game, Hunter and several others each produced top accuracy with a given bullet and load combination. In working with the .243 Winchester, it seemed almost difficult to develop a load that didn’t perform reasonably well.

Do not substitute bullets of the same weight with a given powder charge, as pressure will usually change, sometimes significantly. This is especially important when using monolithic bullets such as the Hornady 80-grain GMX or Barnes Tipped TSX, which should be used with data developed especially for them. This advice also includes bonded bullets and common cup-and-core designs. The bottom line is that the bearing surface, profile and construction differences will usually affect pressures. Use the data exactly as outlined. Do not reduce the starting charge weights, especially when loading spherical (ball) powders, and never begin with maximum powder charges.

In spite of several excellent .243/6mm cartridges being developed to compete with the .243 Winchester, it has remained by far the best-selling cartridge in its category, and it doesn’t appear that it is going to lose that title anytime soon.