Development of the .223 Remington began in 1957, and it became commercially available in January 1964, about a month prior to U.S. military adoption of its twin cartridge – Cartridge, 5.56mm Ball, M193 – for the AR-15/M16 rifle. The case was based on a lengthened .222 Remington that offered powder capacity and velocity increases. It quickly outsold the .222 Remington and the rather new .222 Remington Magnum, causing those two cartridges to quickly fall from popularity. In spite of stiff competition, the .223 is easily the most widely used centerfire varmint cartridge in the world.

The history of the .223 Remington really began in 1950, when Remington introduced the .222 Remington in the company’s Model 722 bolt-action rifle. It was based on a new rimless case and filled an obvious void between the .22 Hornet and .220 Swift. It pushed a 50-grain bullet at a claimed 3,230 fps (reduced to 3,140 fps today) and quickly became popular with varmint and predator hunters. It offered long barrel life, low recoil and accuracy, all of which helped it establish a remarkable record of benchrest wins. It was the “go-to” benchrest cartridge for decades, and even produced a near-perfect five-shot group officially measured at .009 inch by M.P. “Mac” McMillan in 1973. 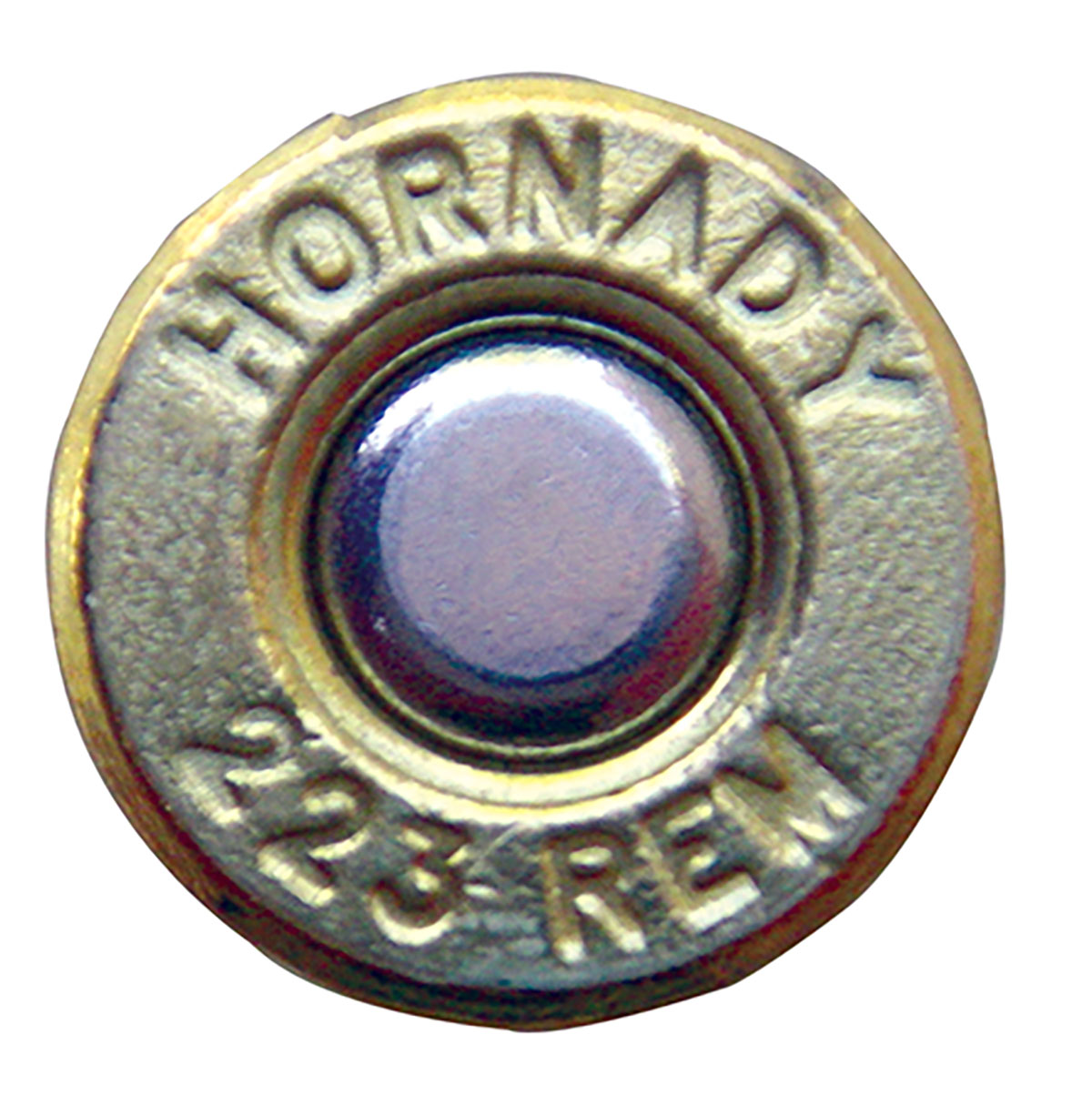 In 1957, the Armalite AR-15 rifle was in development, and the .222 Remington case was lengthened, its shoulder moved forward and its neck shortened to create a new experimental cartridge that would offer greater performance and properly function in the gas-operated action. For several reasons, this cartridge was not accepted by the military, but Remington chose to introduce it commercially as the .222 Remington Magnum in 1957-1958.

Additional experimental cartridges were designed to function in the AR-15 and meet military requirements, including the .222 Special (aka .224 Springfield) that had a shorter case, shorter neck and shorter overall cartridge length than the .222 Remington Magnum. Around 1959, the .222 Special was renamed the .223 Remington to prevent confusion, but it was not introduced commercially until December 1963 in the Remington Model 760 pump-action rifle and was soon chambered in other rifles. Traditionally, it propels a 55-grain bullet at 3,240 fps – a notable increase in velocity and effective range when compared to the .222 Remington.

It is important to mention that the 5.56 NATO is not fully interchangeable with the .223 Remington. External specifications of the two cartridges are identical and can be handloaded with the same dies; however, the 5.56 pressures are measured 1mm forward of the case mouth rather than on the case body. The chamber leade is also cut differently, with the .223 being shorter. As a result, firing 5.56 NATO ammunition in a rifle with a .223 chamber can result in excessively high pressures and is generally not recommended; however, .223 ammunition can be fired in a 5.56 chamber without issues.

Initially, sporting rifles chambered for the .223 Remington and mil-spec, AR-pattern rifles designed to fire the M193 Ball cartridge featured a 1:12 rifling twist. With the changes made to military loads and the 5.56 NATO cartridge by 1980, the rifling twist of mil-spec AR rifles was changed to 1:7 to better accommodate ammunition that contained heavier bullets. In the years since, AR rifles intended primarily for civilian sales have also been offered with 1:8 and 1:9 twist rates, with some specialty rifles featuring a 1:6.5 twist to stabilize match bullets weighing up to 90 grains.

A few bolt-action sporting and target rifles have been fitted with 1:14 twist barrels, such as the Remington 40XB, Husqvarna and various Cooper rifles. These barrels offer good accuracy with 35- to 55-grain, lead-core bullets that include popular varmint and match designs.

With the trends toward heavier, low-drag, long-range bullets, several rifles chambered for .223 Remington are now offered with faster-twist barrels. A few examples include the Ruger American (1:8), Mossberg MVP (1:9) and Thompson/Center Encore (1:10). Savage Arms Inc. bolt-action rifles produced since November 1, 1995, including the Axis, Models 10, 11, 12, 16, etc., have been fitted with 1:12, 1:9 and 1:7 twists, though it seems that of late the company has settled on the 1:9 twist as standard.

Generally speaking, a 1:14 twist will stabilize bullets from 35 to 55 grains; a 1:12 twist is preferable for 35 to 60 grains; a 1:10 for 45 to 70 grains; a 1:9 for 50 to 75 grains; 1:8 for 55 to 77 grains; a 1:7 is used for bullets of 55 to 80 grains. These are very generalized bullet weights for lead-based, cup-and-core designs. Several factors can change these “rough” figures, including elevation, atmospheric conditions, bullet design and construction. It is noteworthy that solid copper bullets are by comparison longer and therefore require faster twist rates when compared to a lead-core bullet of the same weight. When using lightweight frangible bullets, avoid firing them in rifles with fast-twist barrels, as their rotational speed (and other factors) can cause them to disintegrate in flight.

While the 5.56 NATO and .223 Remington are very similar, due to chamber differences and barrel twist rates, it is best to separate load data. The accompanying data is intended for .223 Remington chamber dimensions and includes bullet weights ranging from 35 to 75 grains. Heavier bullets were excluded, as I am unaware of any commercially made .223 rifles with a twist rate faster than 1:8 (with the exception of the previously mentioned discontinued Savage rifles), which is generally necessary to stabilize select 75-grain and most 80- to 90-grain bullets. Select data that corresponds with a rifle’s twist rate to achieve top performance. To develop the accompanying handload data, a Savage Model 10 Predator Hunter Max was used; it features a 22-inch barrel, a 1:9 twist rate and was fitted with a Nikon 3-12x M223 scope.

There has been considerable commentary suggesting that the 5.56 NATO case has less capacity than the .223 Remington, and therefore loads must be reduced accordingly. This is simply not true. I weighed more than 10 different lot numbers of 5.56 cases from different manufacturers, as well as checking their water capacity. They typically weighed between 90.5 grains and 92.5 grains and on average held around 30.6 grains of water, measured level with the case mouth. In checking commercial .223 Remington cases from Federal, Hornady, NoslerCustom, Remington and Winchester, weights varied from 89.5 to just under 95 grains. In short, the NATO cases had less weight and capacity variance than commercial cases. Nonetheless, their average water capacity was almost the same as the combined average of the weighed commercial brass.

Industry pressure guidelines for the .223 Remington were originally established at 52,000 CUP but today have been changed to 55,000 psi, while CIP is listed at 62,366 psi.

While .224-inch bullet selection for the .223 Remington is broad and typically ranges in weight from 35 to 90 grains, terminal performance varies. For example, most bullet manufacturers offer highly frangible “varmint” bullets that give near-explosive results on thin-skinned pests such as ground squirrels and prairie dogs. These bullets can include lead tips, hollowpoints and plastic tips, with the most popular versions usually weighing between 35 and 55 grains. Examples include the Hornady SP SX and V-MAX, Sierra HP and BlitzKing, Nosler Varmageddon HP and Ballistic Tip, Speer TNT and Barnes Varmint Grenade. Many do not offer an especially high ballistic coefficient (BC), which is fine for most prairie varmint shooting. Other bullets are designed to decrease drag and help extend the effective range of the cartridge, making them better choices for bucking wind and hunting in open country. Examples include the Hornady 53-grain V-MAX with a G1 BC of .290, the Nosler 55-grain Ballistic Tip (.267 BC) and Sierra 55-grain BlitzKing (.271 BC).

Although the .223 Remington is often considered inadequate for deer-sized game, when loaded with a bullet designed for the task, it will kill deer reliably. Most of my children started hunting deer and antelope with the .223 and have shot dozens of deer. I loaded ammunition with a variety of bullets, including the Hornady 55- and 60-grain Spire Points (without cannelure), 55-grain GMX, Nosler 60-grain Partition, 55-grain Trophy Bonded and Barnes 50-, 53- and 55-grain Triple-Shock X-Bullet, with each producing excellent results. All these have offered complete penetration on broadside shots.

The list of match bullets is extensive, typically ranging in weight from 52 to 75 grains (even 80- to 90-grain bullets requiring a faster twist rate than discussed here). Hornady is now producing its ELD Match bullets in 52-, 73-, 75- and 80-grain weights.

The selection of suitable powders for handloading the .223 Remington is huge, with some developed specifically to optimize .223 performance. While select extruded powders are known for top accuracy, many spherical (ball) versions likewise produce first-rate performance. Of the powders used to develop the accompanying data, there is not a single right or wrong choice, as all gave respectable accuracy and velocity. Some of the most consistently accurate powders included Hodgdon Benchmark, Varget, H-322, BL-C(2), CFE 223, IMR-8208 XBR, IMR-4198, Accurate LT-30, LT-32, A-2015, A-2230, Ramshot TAC, Alliant RL-10X, AR-Comp, Winchester 748, Vihtavuori N130 and N135.

All the accompanying data was developed using Winchester Small Rifle primers. If a magnum primer is used, such as the Federal 205, Remington 7½ or CCI 450, it may be necessary to reduce maximum loads, as this small change will increase pressures. If ammunition is to be used in extremely cold temperatures, a magnum primer is suggested, especially when using spherical powders. Begin with “start” loads and work up carefully to maximum powder charges while checking for signs of excess pressure.

When it comes to sizing cases, there are several approaches. Full-length sizing is most common. If dies are adjusted as outlined by the manufacturer, loaded cartridges will easily chamber in almost all rifles. If ammunition is to be fired in lever, pump and certain autoloading actions, a small base sizer is generally recommended. When trying to squeeze out additional accuracy and when loaded cartridges are to be fired from a single rifle, a neck-sizing die or a Lee collet die are great choices and will help extend case life.

None of the cartridges in the accompanying data were crimped, as they were fed and fired in single-shot mode. When loading ammunition to be used in the field, and fired in a variety of actions and rifle types, I prefer a crimp to keep bullets in place. A light roll crimp (achievable using most standard seating dies) is adequate. For a roll crimp to offer uniform results, cases must be trimmed to a uniform length. The Lee Factory Crimp die also works very well and provides a reasonably uniform crimp, even when using cases that are not all exactly the same length.