After recognizing a void in its product line, Sturm, Ruger & Co. responded with a completely new handgun, the Lightweight Compact Revolver (LCR) .38 Special. It was designed to capture some of the concealed carry, personal defense and law enforcement markets and incorporated several innovative features to include design, materials and manufacturing methods. It houses five cartridges, sports a 1.875-inch barrel, weighs 13.5 ounces and is rated for +P ammunition.

The concealed carry market is huge, with many men and women choosing to take responsibility for their own protection and safety. A few years back, a Ruger official visited one of the company’s distributors and inquired why they were not selling more Ruger double-action revolvers for the concealed carry market. In response to his question, he was handed a Smith & Wesson .38 Special five-shot J-frame Airweight revolver that weighed around 14 ounces and a Ruger SP101 in the same caliber and a similar barrel length, which weighed around 26 ounces. He was then asked the question: “Which would you rather carry all day?” This undoubtedly helped Ruger rethink the concealed carry market.

Small-frame, double-action .38 Special revolvers have been popular for many decades – such as the discontinued Colt D-frames (Cobra and Detective Special) and the expanding line of Smith & Wesson J-frames, such as the Model 36 Chief’s Special and its lightweight variants. They are simple to operate, reliable, easy to carry and reasonably effective with correct ammunition. The Ruger LCR was clearly developed to capture a portion of that market.

In March 2009 at the Ruger plant in Newport, New Hampshire, I was given the opportunity to spend time with the engineer assigned to develop, design and oversee the LCR project. We examined several prototype revolvers and discussed the design, which is not a rework of any previous revolver but rather a completely new lockwork. I obtained one of the first sample revolvers for this review.

The LCR is double action only with the “hammer” fully enclosed, or shrouded by the frame. This serves to protect the action from dirt, lint, etc., which can cause a gun that is carried a lot and shot little to fail to function. It also provides a smooth profile that is unlikely to snag when being drawn, as hammer spurs often do. The frame is constructed of high-tensile aerospace 7000-series aluminum that fully supports or houses a barrel liner. The lockwork, or what Ruger refers to as “fire control,” is housed in polymer and is a unique, patented design. Clearly this revolver is a departure from all previous “tra­ditional” double-action designs.

The trigger guard is large and easily accessed. By comparison, the trigger is rather short, and with most shooting sessions consisting of 200 to 300 rounds, I found the bottom of the trigger tended to wear the skin off the bottom of my trigger finger. Perhaps others will not have this problem.

The barrel is shrouded to protect the ejector rod from damage. Factory-installed rubber stocks are manufactured by Hogue and are known as the Tamer, which features a soft internal rubber insert that acts as a cushion in the web of the hand. As an option, Crimson Trace Lasergrips are available. The cylinder is heavily fluted to reduce weight as much as possible and is constructed of high-tensile, 400-series stainless steel. Cylinder lockup is positive, and in firing well in excess of 1,000 rounds, it never failed to lock properly. Cylinder rotation is counter­clockwise, as is the rifling twist. Sights are fixed, with the front blade being staked to the barrel. The sight picture is excellent with the front blade measuring .125 inch wide and the rear notch being .155 inch wide. This results in an excellent sight picture that is quick to acquire and offers plenty of “light” on each side of the blade for accurate shooting under all conditions.

The test gun featured what Ruger refers to as Synergistic Hard Coat. The stainless steel cylinder is Advanced Target Gray, leaving a two-tone finish, which is distinguished and results in very little glare – an important feature for a defensive firearm.

The LCR offers a natural feel and balance. When gripped properly it points instinctively, naturally aligning the eye with the sights and target. Using an RCBS Tru-Weight 25-pound scale, the double-action trigger pull broke at just slightly over 10 pounds. It is crisp and gives the shooter that desirable feel of a continuous, even pull without stacking. Having some insight into the amount of work, engineering and testing that has gone into this revolver, there is little doubt that it is durable.

The .38 Special has been around since 1902 and remains one of the most popular centerfire revolver cartridges in use today. Ammu­nition companies have steadily developed and improved loads, particularly those geared for self defense, of which there are dozens available. In this application, +P-style ammunition is generally the better choice.

In order to get an idea of how popular self-defense factory ammunition performed from the LCR’s 1.875-inch barrel, a half-dozen loads were tried. As can be seen in Table I, most loads dropped around 100 fps from their advertised velocities. For example, Federal 125-grain jacketed softpoint (JSP) +P advertised at 945 fps actually clocked 845 fps for five shots. Winchester’s 158-grain lead semi­wadcutter hollowpoint (SWC-HP) +P load, popular with police, FBI and civilians, is said to reach 890 fps but actually registered 793 fps. A Remington 125-grain jacketed hollowpoint (JHP) advertised at 945 fps dropped to 831 fps, while its 158-grain lead hollowpoint load is listed at 890 fps but fell to 805 fps. 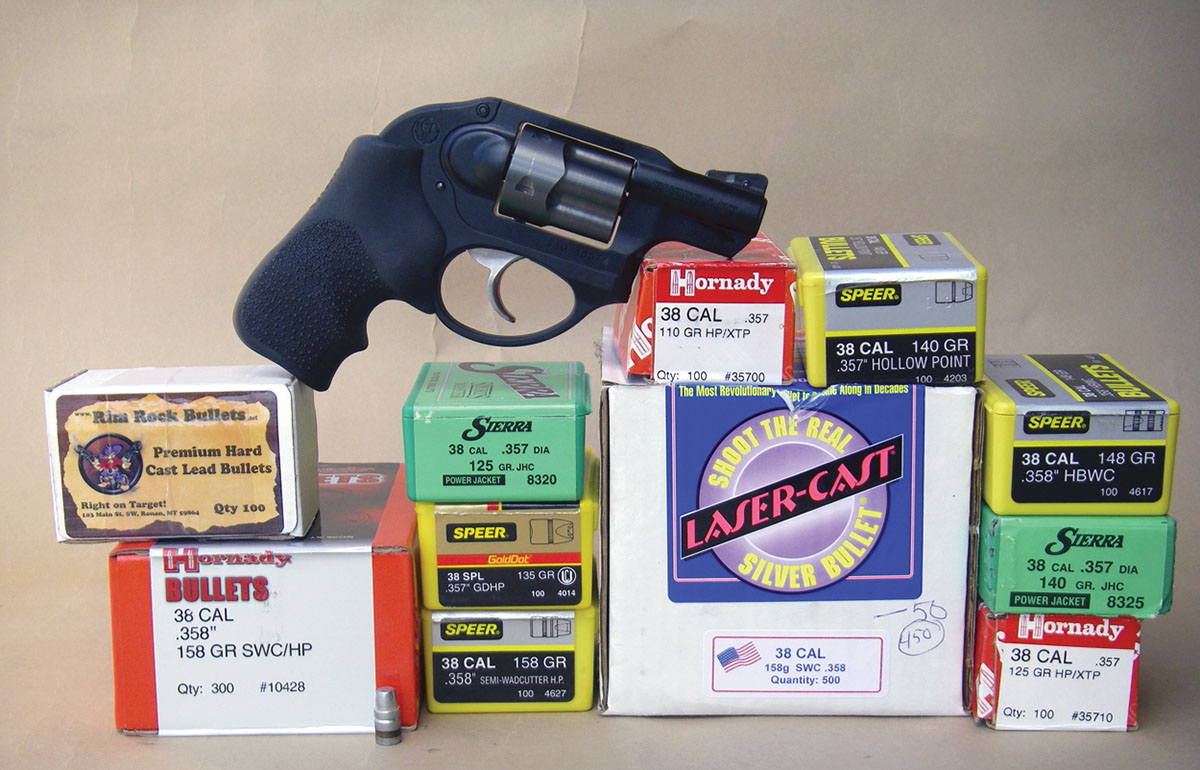 Buffalo Bore .38 Special loads containing 158-grain cast SWC-HPs with gas checks were on hand. These loads have even captured sales to the FBI. The bullet is comparatively soft with a Brinell hardness number (BHN) of just over 10, which allows it to expand reliably at .38 Special velocities. Buffalo Bore’s Low Flash non+P load averaged 849 fps and proved more powerful than most +P commercial loads. Its +P version with the same bullet reached 999 fps, which is substantial velocity from such a short-barreled, 13.5-ounce revolver.

Due to excellent available components (powder and bullets), a knowledgeable handloader can assemble loads similar in performance to the above factory loads and even exceed them while staying within prescribed pressure limits. Industry working pressures for standard non+P .38 Special ammunition is 17,000 psi, while +P pressure loads are held to 20,000 psi.

For those wanting to use 110-grain bullets, 7.5 grains of Alliant Power Pistol pushed Hornady and Speer bullets to almost 1,100 fps. Switching to 125-grain bullets, which are notably better for defense purposes, 8.0 grains of Accurate No. 5 reached over 1,000 fps, and 6.8 grains of Power Pistol produced similar velocities. Another excellent load is the Speer 135-grain Gold Dot HP designed specifically to perform ideally (expansion and penetration) at .38 Special velocities. Pushed with 6.7 grains of Power Pistol, velocity was 987 fps, extreme spreads were low, and muzzle blast was not objectionable. This should be considered a top-notch load. Using 6.6 grains of Hodgdon Longshot, Sierra 140-grain JHC and Speer JHP bullets reached 929 and 932 fps, respectively.
Some sources list data for 158-grain jacketed bullets in the .38 Special. I do not recommend this practice, as these bullets will commonly stick in the bore, which is dangerous to the shooter and will likely damage the revolver. I have examined many guns that were damaged from this combination. Therefore, no loads are listed here using jacketed bullets heavier than 140 grains.

Swaged lead and cast bullets weighing 148 to 173 grains offer a number of excellent loads for practice or defense applications. Using the 148-grain Speer hollowbase wadcutter, 3.0 grains of Accurate No. 2 reached 706 fps, which makes a nice low-recoil practice load. Using the Hornady 158-grain lead SWC-HP, 4.0 grains of Hodgdon Titegroup reached 829 fps, and 6.0 grains of Accurate No. 5 reached 854 fps. Although both loads are listed under the +P data, neither are maximum loads but rather are held to those velocities to prevent barrel leading. It should be pointed out that both of the above loads produced greater velocity than popular factory +P loads from Winchester and Remington that likewise feature a 158-grain swaged lead SWC-HP style bullet.
Another noteworthy load is the Rim Rock 158-grain SWC-HP gas check bullet pushed 1,004 fps using 6.3 grains of Alliant Power Pistol. This bullet did not leave any notable leading in the bore at that velocity. It is cast with an 11 BHN and features a generous (deep and wide) hollow point that provides reliable expansion and great shock. This bullet and load combination brings the old .38 Special to new levels of effectiveness and is a top-rate defense load.
For those who might carry an LCR in the hills or timber country, I have included loads with the old, proven 173-grain Ly­man/Keith cast bullet from mould 358429. This bullet has a proven record on large game, typically fired from a .38/44 or .357 Magnum revolver, and it offers unusually deep penetration. Using 7.0 grains of Accurate No. 5 and 5.9 grains of Power Pistol, velocity was 929 and 946 fps, respectively. These loads are +P but are within industry pressure guidelines.

There were no problems asso­ciated with handloading the .38 Special LCR. It is suggested when loading the Speer 148-grain hollowbase wadcutter that only a light crimp be applied. On the other hand, all other bullets should receive a heavy crimp, especially +P loads, to prevent bullets from jumping crimp. It is suggested to use an expander ball measuring .353 inch (and never larger than .354 inch) to assure that the bullet-to-case fit is tight, which helps with ignition and serves to keep bullets in place during recoil.

The LCR is an impressive revolver that functioned flawlessly throughout many shooting sessions and was easy to shoot ac­curately. This gun is designed primarily as a close-range defensive weapon, wherein softball-size groups are sufficient to get the job done, but I could not help but try it at 200 yards – primarily for fun. As any dedicated sixgun crank will attest, even when firing double action, credible long-range work can be accomplished with short barrels. I recall watching my old friend Allen Taylor hammer 200-meter rams (with only an occasional miss) using double action only. From a seated back position with elbows resting between my knees and a death grip-type hold, the LCR proved accurate.