In 1935 Smith & Wesson and Winchester worked together to develop the .357 Magnum, still one of the top-selling revolver cartridges. In 1990 these two companies again jointly developed the .40 S&W. It not only became immediately successful, but also has become a common police-issue cartridge in the U.S. and has found favor for personal defense applications and among IPSC competitors. Based on annual dies sales, for several years it has ranked in the top five cartridges among handloaders.

To discuss the history and development of the .40 S&W, its parent cartridge, the 10mm Auto, must first be considered. In the 1970s Jeff Cooper, along with several other experimenters, began wildcatting a .40-caliber cartridge that was based on a cut-off .30 Remington case, not to be confused with the modern .30 Remington AR case. Hercules (now Alliant) Unique powder was chosen, as it was the best available at that time and gave respectable performance. Bullets from the .38-40 WCF and .401 Herter’s Power Magnum measuring .400 inch were used with good results. Their wildcat was primarily housed in a modified Browning Hi-Power pistol. 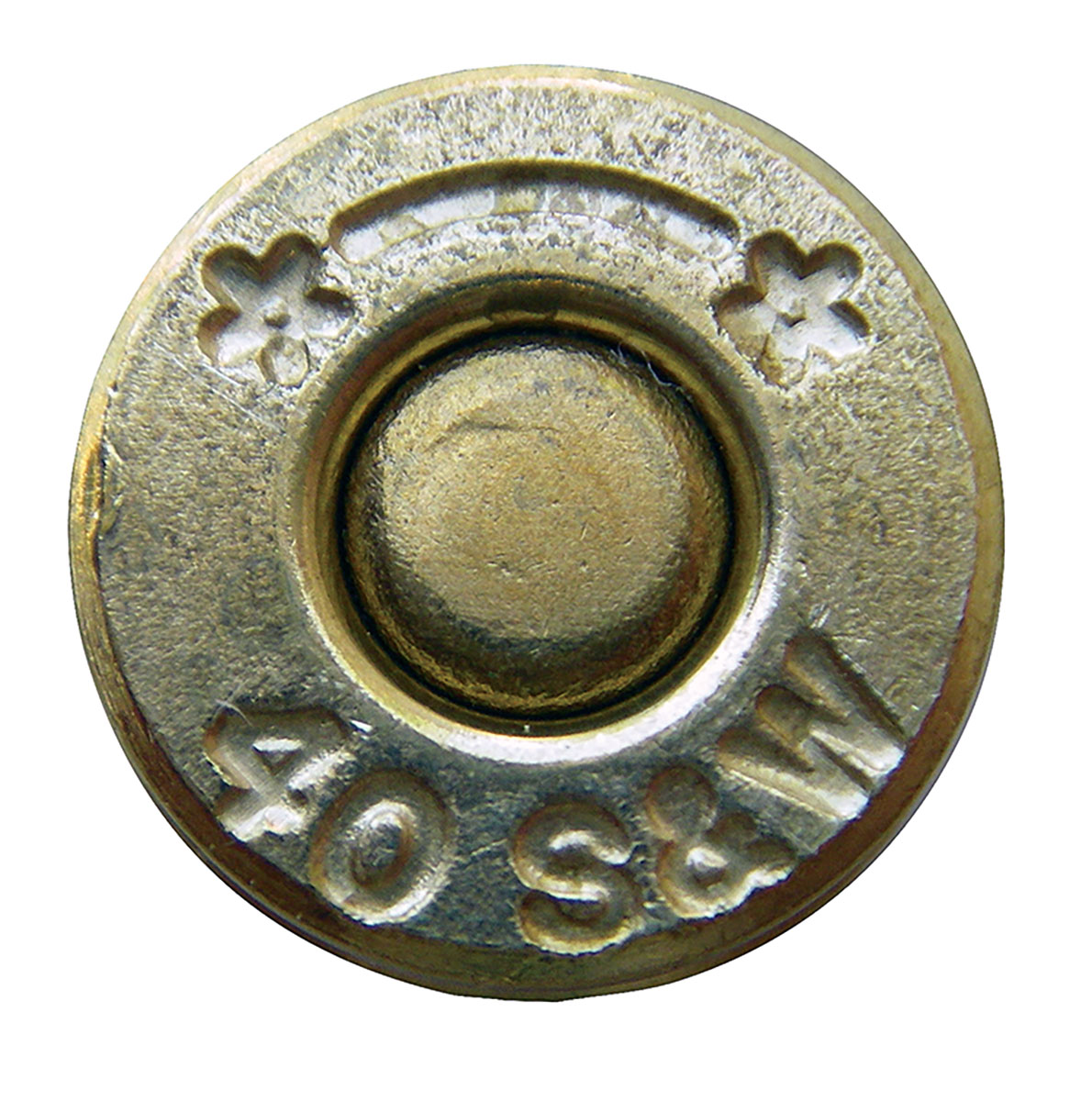 Tom Dornaus and Mike Dixon eventually took the ball and ran with it when they began production of the Bren Ten pistol in 1983, while Norma began offering factory 10mm Auto ammunition. Production problems arose and there was a rather limited number of guns produced. Colt then recognized the potential of the cartridge and began chambering its Model 1911 Delta Elite for the 10mm in 1987, and other companies soon followed, including Smith & Wesson. After extensive testing the FBI adopted the 10mm along with the Smith & Wesson Model 1076 double-action pistol, which brought considerable attention to the cartridge, and sales surged.

The 10mm was loaded to 37,500 psi and could push a 200-grain bullet 1,200 fps or a 180-grain bullet around 1,350 fps from a 5-inch barrel. Performance was impressive, but not all law enforcement personnel could master the recoil. This ultimately led to the FBI requesting reduced loads that pushed a 180-grain bullet 980 and 1,030 fps and became known as the “FBI Lite” or “10mm Lite.” Essentially, it gave adequate power but notably reduced recoil and was easier for agents to master in rapid-fire mode. 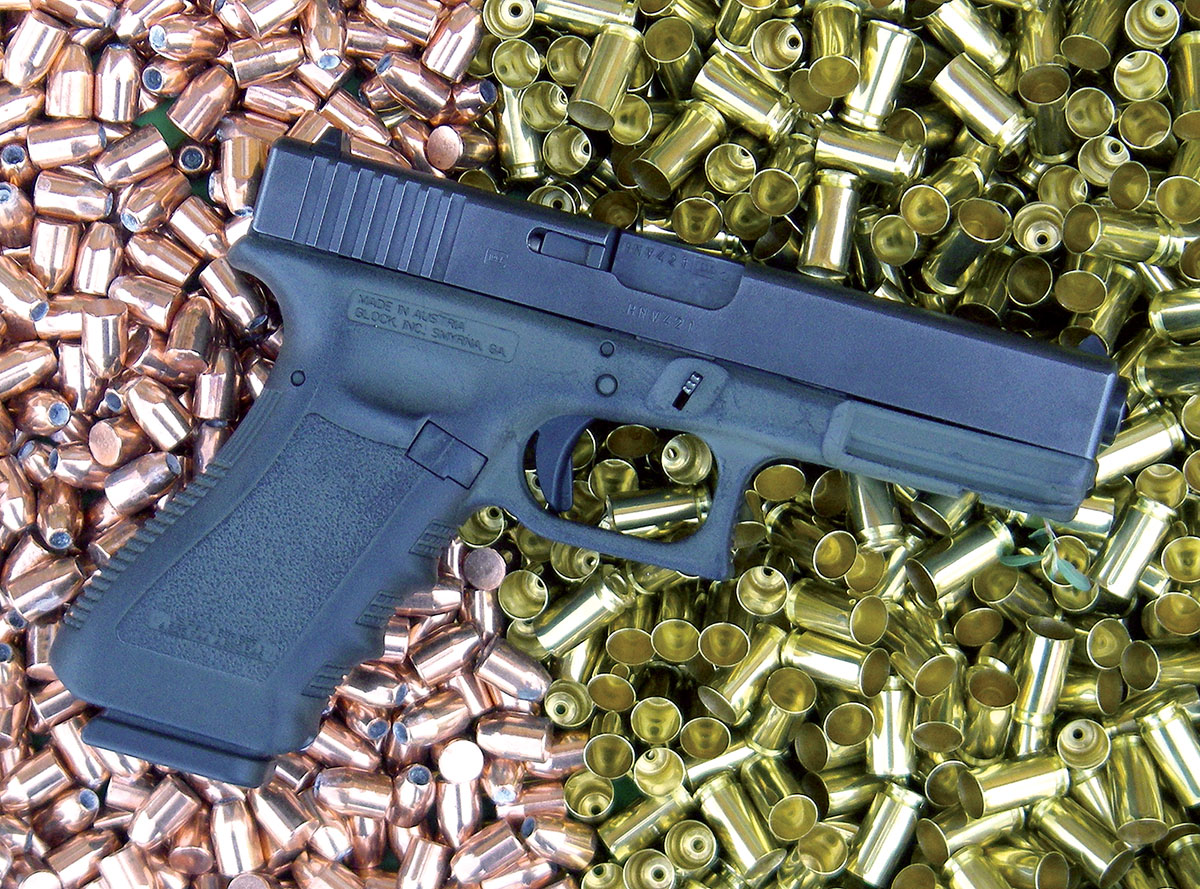 At this time there was a division in law enforcement. The change from revolvers to autoloading pistols was in full swing, but there was a debate over the 9mm Luger and .45 ACP cartridges. The 9mm was said to have the advantage, due to its notably higher magazine capacity, than a single-stack .45 ACP. Proponents of the .45 cited its proven combat record, large caliber and reliable performance – and considered the 9mm marginal.

Smith & Wesson saw the chance to fill a rather large void and cut the 10mm case from .992 inch to .850 inch, loaded it to an overall cartridge length of 1.135 inches along with changing the primer from large pistol to small pistol, and the .40 S&W was born. Initially factory loads were to duplicate the subsonic 10mm Auto “FBI Lite” loads with a 180-grain JHP at around 1,000 fps. It could be housed in most 9mm-size pistols, which were generally smaller and lighter than the Model 1911, and magazine capacity was only slightly less than the 9mm. This combination mostly satisfied both sides of this “division,” as it offered high capacity and a significant (caliber and bullet weight) performance edge over the 9mm. Being available in lighter, more compact pistols, it not only appealed to law enforcement but also the concealed carry market, which has been steadily growing for years, and it has become an extremely popular cartridge choice.

When Smith & Wesson formally announced the Model 4006 .40 S&W pistol in January 1990 along with ammunition from Winchester, the response was overwhelming. Soon every major pistol manufacturer began offering guns, and today there seems to be more models than can be counted. New loads have also appeared that range in bullet weights from 125 to 200 grains, but the most popular are 155, 165 and 180 grains, which are generally advertised at around 1,205, 1,150 and 1,025 fps, respectively. Many specialty loads (including indoor lead-free, FMJ bulk target loads, etc.) are often loaded to lower velocities.

For developing handloads for the .40 S&W, a Glock Model 22 was chosen. This is a full-size version that is essentially the same size as the Glock Model 17 9mm Luger. It features 15-round magazine capacity, a 4.35-inch barrel and proved reliable throughout all testing, which included several thousand rounds.

In spite of the .40 S&W being a modern cartridge, there have been some difficulties with case dimensions. There is generally a SAAMI minimum and maximum specification (internally and externally) for a given cartridge case, but some manufacturers, including major ammunition com­panies, have occasionally cut (or formed) the case walls too thin. From a handloading standpoint, this can be problematic. After cases are full-length sized and the outside case dimensions are within industry specifications, then the case mouth expanded using an expander ball that measures .3975 inch, .400-inch bullets can be inserted fully into the case without firm case-to-bullet fit, which is essential in producing reliable ammunition. If powder is in the case, bullets will drop right down and rest on top of the powder charge. When this occurs, there is no way to reliably seat bullets to an exact overall cartridge length, except with a powder charge that fills the case 100 percent to the base of the bullet. Even if bullets are seated to a uniform length, the taper crimp alone is inadequate for proper bullet pull. As such, Starline cases (1-800-280-6660) that were dimensionally correct and provided a firm bullet-to-case fit were used here and resulted in reliable ammunition.

The Glock pistol features a rather deeply-cut feed ramp. When fired, the case begins to extract from the chamber while pressures are still high enough that it causes a bulge just forward of the head. Some handloaders refer to this as an “unsupported chamber,” which is probably not technically correct, as I cut cases from several manufacturers in half to determine if the case walls were unsupported when fully chambered. All were supported, but none had to be extracted very far to expose the case sidewalls. Regardless, this causes what is commonly referred to as the “Glock bulge” on fired cases. The problem is that there is .125 inch from the bottom of the shell holder to the top that contacts, or very closely contacts, the sizing die. Plus there is usually another .125 to .165 inch, depending on die manufacturer, associated with the carbide ring beveling that allows cases to enter the sizing die easily but does not size the case. This total measurement can be as much as .290 inch. The .40 S&W solid head, measured from the bottom of the case to just forward of the flash hole by cutting cases in half, usually runs around .190 to .195 inch. The end result is that around .100 inch just forward of the head does not get sized. This remaining bulge can cause chambering problems with reloaded cartridges.

A simple solution to the problem is the Redding GRX Push Through sizing die. Fired cases are pushed through the die (and into a plastic bottle) prior to being full-length sized in a traditional carbide sizing/decapping die. This step goes fast and is imperative in producing reli­-able reloads from brass fired from a Glock or any other pistol that causes a similar bulge that cannot be fully removed by traditional case sizing.

Maximum average pressure for the .40 S&W is 35,000 psi (the same as the .357 Magnum), and none of the accompanying data exceeds that limit. However, due to its short powder column and limited capacity, it is a sensitive cartridge and any change in components or bullet seating depth can change pressures significantly. Loads should only be used exactly as listed.

Like most other straight-walled, autoloading pistol cartridges, the .40 S&W was designed to headspace on the case mouth. Cases should measure .850 inch maximum and trimmed no shorter than .845 inch. A taper crimp should be applied after bullets are seated to the correct depth to help hold bullets in place and aid with proper powder ignition. In checking many factory loads, crimps measured between .4175 to .420 inch. All loads in the accompanying table were crimped to .419 inch, which can be measured using blade calipers.

In spite of Glock advising against using cast bullets in its guns, I developed load data using Oregon Trail’s Laser Cast 180-grain, .401-inch truncated cone bullet. There were no problems, but bullets were not pushed to maximum velocities. There were slight traces of lead in the bore, but there was never a lead buildup. I would suggest using cast bullet data that produces between 800 to 850 fps. If leading does occur, it should be removed prior to using jacketed bullets.

Incidentally, the Glock barrel is especially smooth, has a gentle leade into the rifling and is well suited for using cast bullets. The main problem is that many shooters use commercially cast bevel- base bullets with jacketed bullet data, which results in higher velocities and barrel leading. When fired in volume the leading can build up right in the leade. Then, without cleaning the barrel, a full-power, high-velocity jacketed load is fired, which can cause pressures to spike and has been proven to cause case rupturing.

The Barnes 155-grain TAC-XP bullet is constructed of solid copper and has a rather deep hollowpoint. This is the longest bullet used herein, measuring .735 inch. (For comparison, the Hornady 155-grain HP-XTP and Speer 155-grain Gold Dot measure .550 and .548 inch, respectively, while the 200-grain HP-XTP measures .683 inch.) Rather than the entire shank measuring .400 inch diameter, it measures .3915 inch at the base and tapers up to .400 inch near the case mouth when seated to an overall cartridge length of 1.125 inches. This helps reduce bearing surface and pressures. Nonetheless, the great length of this bullet extends deeply into the case and reduces powder capacity enough that it is not really suit­able with all powders unless significantly reduced velocities are acceptable. Nonethe-less, with 7.0 grains of Hodgdon CFE Pistol powder it reached 1,086 fps and was accurate.

The most accurate load developed consisted of the Speer 165-grain Gold Dot HP at 1,108 fps using 7.0 grains of Hodgdon CFE Pistol powder, which grouped just under 2 inches – better accuracy than was obtained with any factory load.

In developing load data for the .40 S&W, many times I was impressed with the low extreme spreads that hovered between 5 to 15 fps with some of the better powder and bullet combinations. The Glock Model 22, however, was designed as a service and defense pistol rather than a target gun, and I felt that it was leaving accuracy on the table, so to speak. I had the opportunity to shoot a highly modified Model 1911 .40 S&W. The accuracy was astounding with select match-style loads, as 25-yard groups clustered into a single, ragged hole. I was impressed but not surprised.

It is clear that the .40 S&W is here to stay. If kept within its proper applications, it is a versatile and impressive pistol cartridge.