In 1935 Smith & Wesson teamed with Winchester to introduce the .357 Magnum cartridge, which began the modern “magnum” revolver era with a focus on increased velocities. In 1956 and 1964, S&W teamed with Remington, with some prodding from Elmer Keith, to bring about the .44 and .41 Magnums, respectively. The .357 and .44 in particular have become popular and, in spite of trends toward high-capacity autoloaders, remain sought after today. Because of their great versatility and availability in many types of firearms, they have been used for target competition, personal defense, law enforcement and hunting.

Smith & Wesson’s .500 S&W Magnum is much more specialized. It was announced in late 2002, with production guns shipping in mid-2003. This cartridge has considerably more power than any previous magnums produced by S&W, and it requires a completely new revolver frame to accommodate its enormous size and high pressure. 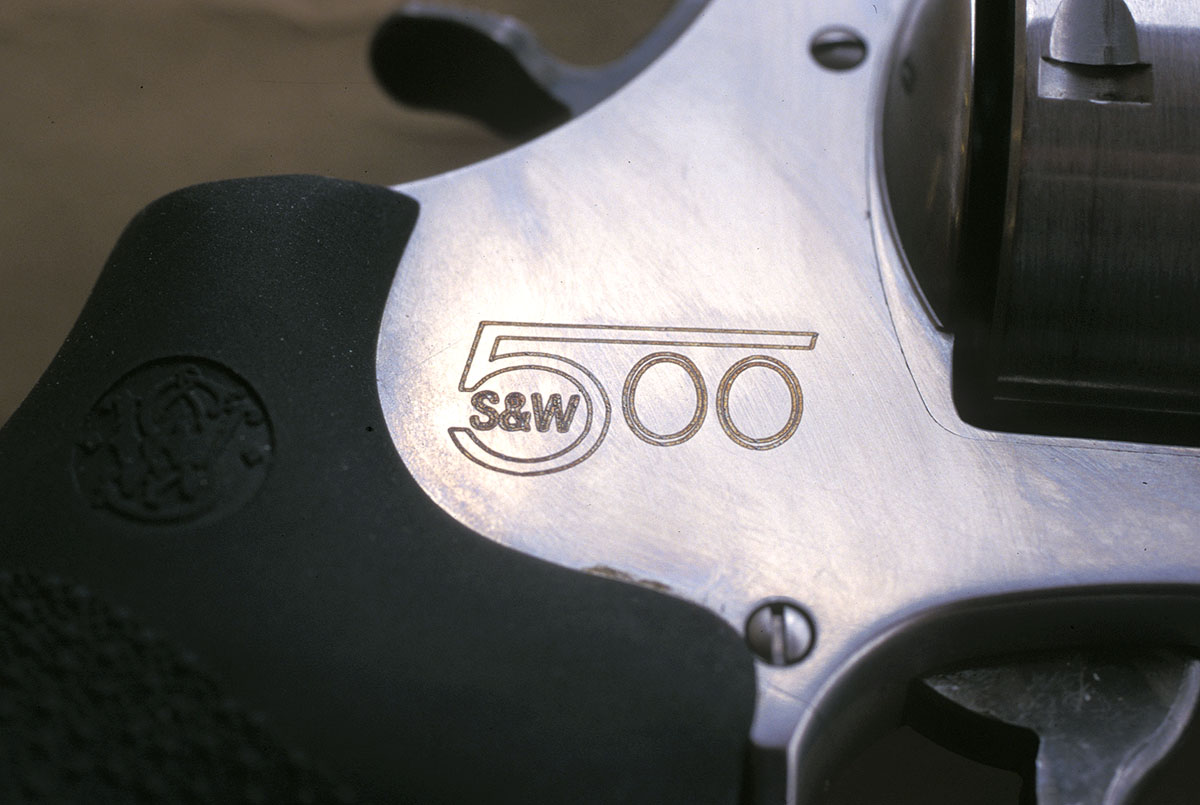 Early in 2000 I was cornered by a Smith & Wesson engineer at the SHOT Show and was asked my thoughts on big-bore hunting cartridges that could be housed in a totally new frame. I suggested they build a frame that could handle the .454 Casull and .475 Linebaugh, but especially the .500 Linebaugh. I’m fond of these three cartridges, but the .500 is a particular favorite, as it is of larger caliber, operates at lower pressures and, if the right bullets are used, penetrates just as deeply or more than either the .475 or .454.

The .500 Linebaugh is based on the .348 Winchester case cut to 1.4 inches and straightened to accept .512-inch bullets. One of the aspects of this cartridge is that full-house loads will drive a 440-grain bullet 1,250 to 1,300 fps, yet it only has a chamber pressure of around 30,000 psi, which is less than a .357 or .44 Magnum. The older I become, the more I appreciate low pressures, particularly from a sixgun. Furthermore, this cartridge is about the upper limits of recoil that can be mastered in a revolver that is of “hip carrying” size and without ports or muzzle brakes. I had in mind an S&W revolver that would be slightly larger than the Model 29 and would weigh around 50 ounces empty, which is certainly a reasonable size and weight for the hip, and possibly a different grip frame that would be better suited to handling heavy recoil.

Smith & Wesson had something completely different in mind. The then-new cartridge, developed jointly with Cor-Bon Ammunition, is a .50 caliber, but rather than using traditional .512-inch bullets, it requires .500-inch bullets. The case measures 1.6 inches, similar to the .500 Linebaugh “Maximum” cartridge, which also uses a case that is 1.6 inches long. (This cartridge was developed in 1989 by John Linebaugh and was based on .348 Winchester brass and built on Ruger .357 Maximum frames.) Recommended SAAMI maximum average pressure for the .500 S&W is an incredible 60,000 psi, but factory loads from Cor-Bon, Buffalo Bore and Hornady are some 10,000 to 14,000 psi less than this figure.

The ballistics are impressive: Early Cor-Bon factory fodder was advertised to drive a 440-grain cast bullet 1,625 fps, a 400-grain jacketed softnose 1,675 and a 275-grain Barnes hollowpoint 1,665 fps. Buffalo Bore offered loads with more or less the same bullet weights and velocities but also offered a reduced load that drives a 440-grain cast bullet 1,335 fps, which is still very powerful and effective, yet comparatively pleasant to shoot. The first Hornady factory load drove a 350-grain jacketed XTP bullet to 1,725 fps.

The Model 500 frame, known as the X-frame, is utterly huge; the cylinder window measures 2.5 inches (inside length) by 1.95 inches tall. The five-shot cylinder places the bolt stop notches between chambers for added strength, and measures 1.925 inches in diameter, while outside chamber walls run .110 inch. The cylinder locks up at the rear in traditional S&W fashion but also locks the crane with a ball detent. The frame and cylinder are constructed of 410-series stainless, while the barrel is of 416-series  stainless. In short, this is plenty of mass to handle a cartridge of this size and pressure.

The Model 500 comes standard with an 83⁄8-inch barrel that is fitted with a heavy underlug and a three-port muzzle brake; additional barrel lengths followed. It weighs more than 71 ounces empty as outfitted above and is obviously not a hip-carrying handgun! The rear sight is fully adjustable, while the front features an interchangeable blade. The grip frame is borrowed from the S&W K-frame series of guns: It will take the same stock as a round butt K-frame revolver.

The lockwork, or action, is the same basic design S&W has been using for years; the sample worked smoothly, without a hitch. Like practically all S&W revolvers, the single-action trigger pull broke crisply at 64 ounces.

The revolver is rather muzzle heavy and as a result handles slowly. After hefting it around for a few weeks, then picking up a Model 29 .44 Magnum, it felt by comparison ultralight and quick handling. This is something like a track-and-field runner taking off heavy ankle weights! On the other hand, with the recoil this cartridge generates, this heft is a good thing.

There have been some conflicting reports on how this gun recoils. Simply stated, with full-power 440-grain bullets at more than 1,600 fps, it definitely kicks and is not for the recoil-sensitive. Let me state that there is a big recoil difference between a 275- and a 440-grain bullet at 1,600 fps. Some shooters have complained that the “hump” at the top of the S&W grip frame tends to hit the web of the hand rather hard. I feel it directly in the center of the palm. Forty or 50 full-house loads in a single shooting session is plenty. Midrange loads with 350- to 440-grain bullets in the range of 1,200 to 1,300 fps are another matter and are certainly manageable. Mild target loads producing less than 1,000 fps can be fired comfortably by practically anyone.

The big .500 is capable of putting five shots of Cor-Bon 440- grain cast and 400-grain jacketed softnose loads into one inch at 25 yards along with several of the accompanying handloads. In some instances groups clustered into less than .75 inch.

When handloading the .500 Smith & Wesson, be aware of several points, or pitfalls. Early Cor-Bon factory loads used in development of the revolver/cartridge and most of the early shipments of ammunition utilized a large pistol magnum primer, but the primer pocket was changed (deepened) to accept a large rifle primer. This change was made because it was discovered by Hodgdon Powder Company that as loads approached 50,000 psi with certain magnum pistol powders, pressures became erratic and sometimes soared from delayed ignition. A large rifle primer was found to stabilize the problem, so the change was made. Additionally, extreme spreads are reduced with the large rifle primer. Starline brass was used for all load development. The cases withstood several reloads without a hitch and showed excellent overall quality and uniformity.

Handloaders should be careful with reduced loads. The .500 is a huge revolver case, and many of the powders commonly used for reduced loads in other 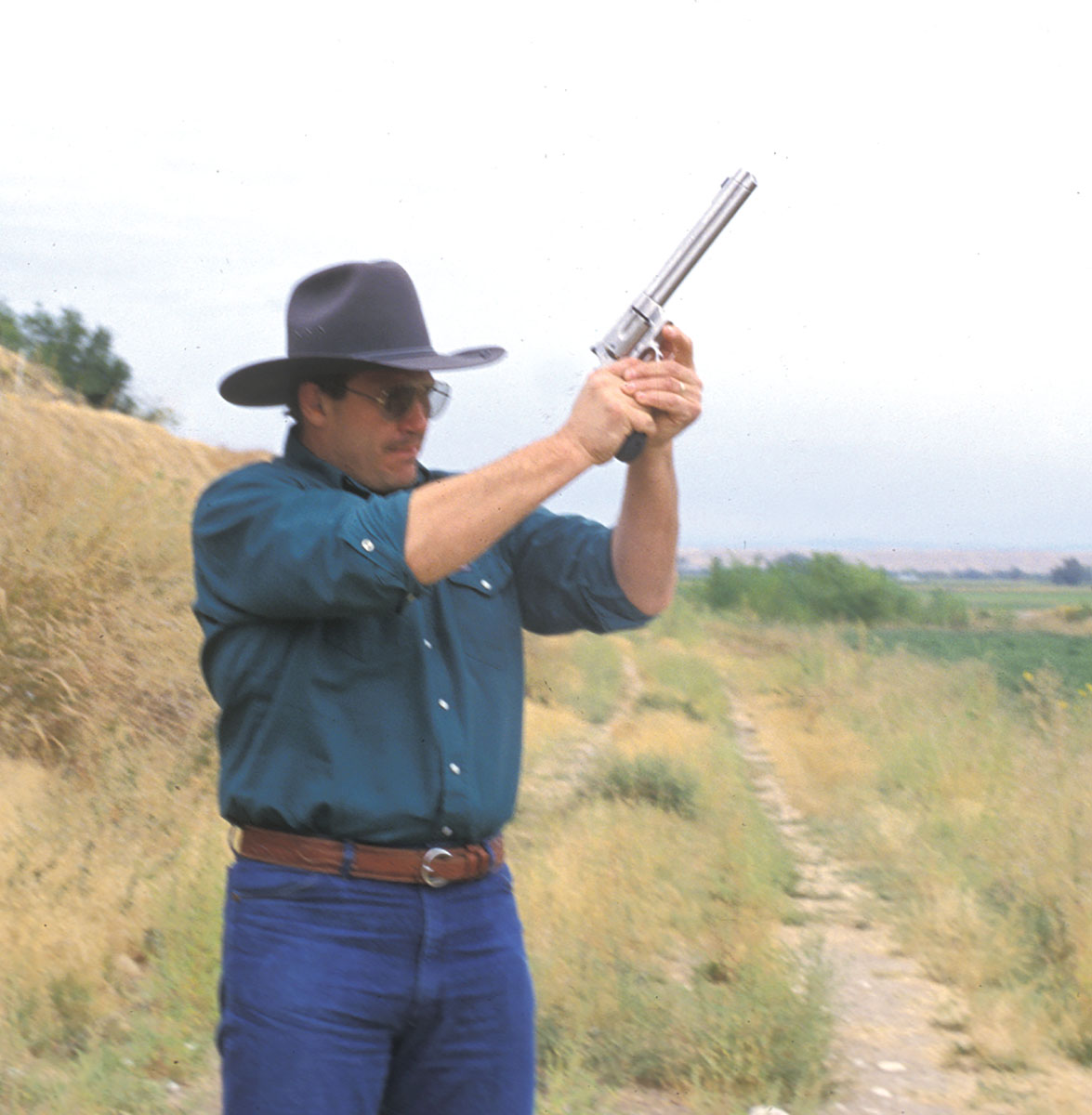 magnum sixgun cases can easily be double charged, a situation that is likely to damage the handgun and possibly the shooter! Furthermore, this much space in a case can bring about erratic ignition, high pressures and even hangfires. With these stern warnings in mind, I have presented some reduced load data that has been pressure tested. It is suggested to use them exactly as shown, or search out additional data that has been tested from a reputable lab.

Bullets must measure .500 inch (give or take .001) rather than the traditional American .50-caliber measurement of .512 inch. This is the same diameter as the .50 Action Express, but bullets for that cartridge are usually void of a cannelure and aren’t really suitable for the big .500 S&W. Without a heavy crimp there is just not enough bullet pull to reliably prevent them from jumping crimp and possibly tying up the revolver.

The industry has responded to this new cartridge and created several good jacketed and cast bullets of .500 inch as components. Jacketed examples include the Hornady 350-grain XTP, Sierra 350- and 400-grain JSPs and Hawk 400-grain JSP. Barnes is offering a solid copper X-Bullet with a hollowpoint in 275- and 325-grain weights, the latter being a rather pointed spitzer style. There are other manufacturers that offer additional bullets.

Cast Performance Bullet Company was first to offer a cast bullet designed specifically for the big .500 and was actually involved in its development. For this data two bullets were used: a 370- and a 440-grain Wide Flat Nose (WFN), both fitted with gas checks, which is a good idea considering the high velocities and pressures at which this cartridge operates.

Just for the record, the throats of the Model 500 measured exactly .500 inch. Unusual for Smith & Wesson, this revolver features six lands and grooves, rather than the odd number of five typically found on its handguns. This made it feasible to slug the bore and get an accurate measurement, which was also .500 inch. With these close dimensions – or correct bore and throat measurements – it’s no surprise the revolver was accurate.

Dies from RCBS and Hornady were tried, and each worked without a hitch. Without a carbide or titanium nitride sizer die, cases will need lube before sizing. The expander ball of the RCBS die measured .496 inch, while the Hornady expander design, being a part of the die body, makes it difficult to measure, but indications were that it was similar in size to the RCBS. I would like to see the expander ball turned down to .490 inch to assure the case-to-bullet fit is indeed tight, which I believe will give more consistent ignition, better load uniformity and will help prevent bullets from jumping crimp. This would be especially important with cases that have been reloaded many times and are losing some of their ability to hold the bullet as firmly as new brass.

The handloader can easily duplicate the velocities of factory loads with Hodgdon H-110, Lil’Gun, H-4227 and Winchester 296. There were several other propellants that gave good results and were accurate, but they couldn’t duplicate the velocities of factory ammunition without running into signs of excessively high pressure. Examples include IMR-4227, Alliant 2400, Accurate No. 9 and Vihtavuori N110. Keep in mind, when handloading a cartridge that is of this power level, highest velocity is not always the goal. A 400- or 440-grain bullet traveling some 200 fps less than maximum works just as well as its full-house counterpart and is much easier on the shooter. For midrange and reduced loads particularly good results were obtained with HS-6 and Titegroup.

None of the loads presented in the accompanying table exceed 50,000 psi, which should be considered maximum, rather than the listed SAAMI maximum average pressure of 60,000 psi. As loads reached 52,000-psi levels, cases from three manufacturers (Starline, Hornady and Jaimeson In-ternational) began sticking and became hard to extract. As loads reached 60,000 psi, gas began leaking around the primers, and pockets were enlarged, making the cases useless for future loading. Ammunition with 60,000 psi is just too close to the edge of real problems and sacrifices reliability. Having worked with this cartridge to a fair extent, I believe the ammunition companies are wise in keeping pressures between 46,000 and 50,000 psi, and handloaders should follow their example.

Another reason to keep loads to 50,000 psi or less is that as the gun recoils, it moves back in the hand enough that the trigger finger allows the trigger to rebound forward while the gun is only halfway through the recoil cycle. I only experienced this with heavy loads that are not published here, but some shooters have reported it happening with factory ammunition or equivalent handloads. The risk is that the gun can fire a second time, which has happened, while still in the recoil cycle from the first round, and who knows where this second shot will go?

In reviewing the notes taken during the shooting sessions with the big S&W .500, I was impressed with its overall accuracy. Certainly some loads displayed better accuracy than others, but not by a big margin.

This is a specialized cartridge and will never achieve the level of popularity of previous magnum revolver cartridges born in S&W handguns, but it appears as though it’s here to stay.