Many cast rifle bullet designs are intended for a specific purpose and to fit certain sized chamber throats, leade angles and cartridge neck lengths. That can limit their usefulness in some cartridges and even rifles, but over the years, I’ve shot RCBS Silhouette rifle bullets in an assortment of 7mm and .30-caliber cartridges, and the bullets have fit and shot well in all of them. According to Kent Sakamoto, RCBS senior product manager, the RCBS SILH bullet designs are an adaptation of the original bore-riding bullet designs from the 1970s by making the nose more rounded versus the original conical design. RCBS engineer Ken Alexander designed the SILH rifle bullets. Larry Meyer, also of RCBS, had some modified designs made for his guns to shoot in competition.

Moulds for RCBS SILH bullets include the 6.5-140-SILH, 7mm-145-SILH, 308-165-SILH and 308-200-SILH. These four bullets are designed with a short, full-diameter body and a long, forward parallel that fits between the rifling lands. That shape allows the bullets to fit in chambers with short throats, while also supporting the front of the bullet between the rifling lands to ensure the bullet is aligned with the bore on chambering and most of its length is supported as the bullet goes down the bore.

The SILH’s short, full-diameter body also permits seating the base well within the neck of a cartridge with an abridged neck, like the .300 Savage, .300 Winchester Short Magnum and .300 Winchester Magnum. A cast bullet will shoot accurately with its base and body seated below the neck. On firing, however, the base of the bullet below the neck may be distorted before the bullet moves forward into the chamber neck and throat. Powder gases may also scour lead from the sides of a bullet, preventing it from sealing off in the chamber throat and bore, causing leading in the rifling. So it is easier and less aggravating to choose a bullet that can be seated with its base enclosed and protected in the case neck.

The .300 Savage has a very short neck at .2207 inch in length, but with the 308-165-SILH bullet seated for a cartridge length of 2.60 inches, the bullet’s base is even with the bottom of the .300’s neck. When purchasing a Savage 99 .300 Savage years ago, I wanted an inexpensive load to practice with the rifle. The 308-165-SILH bullet was paired with 28.0 grains of IMR-4895. Experimenting started and stopped with that combination, as my notes state it was a “great load.” 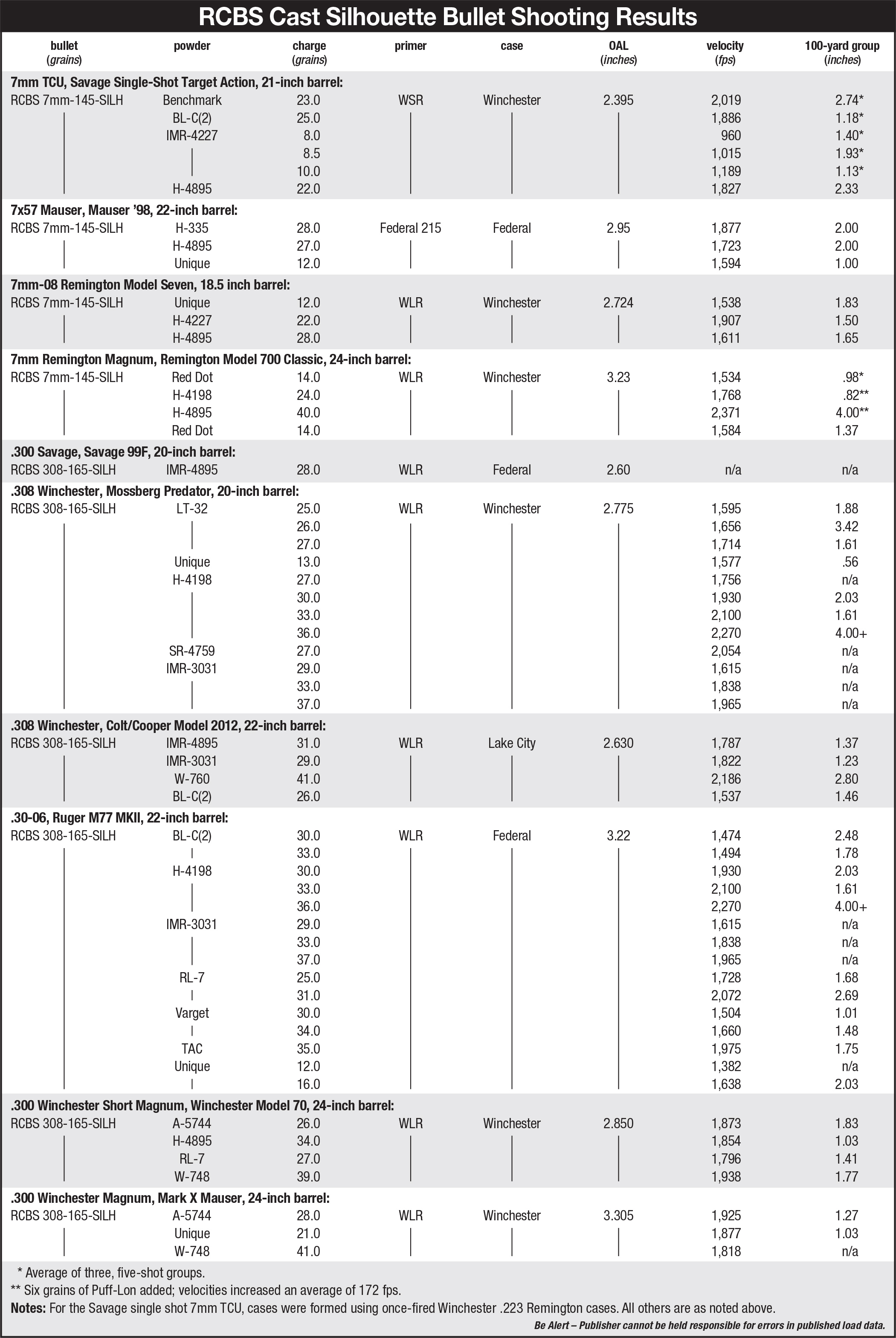 The .300 Winchester Magnum has a similarly short neck. With a cartridge length of 3.305 inches, only the gas-check capped base of the 308-165-SILH bullet extends below the bottom of the case neck. With velocities between 1,800 and 1,900 fps, groups were just over an inch at 100 yards.

In contrast, other cast bullets that have long, full-diameter bodies must be seated well below the neck of .300 magnum cases for their front driving bands to sit next to the start of the rifling. They failed to shoot nearly as well as the SILH bullets.

The SILH bullets have only one full lubrication groove. When I first shot 308-165-SILH bullets from a .30-06 and 7mm-145-SILH bullets from a 7mm-08 Remington, I wondered if one groove held enough lubrication to last the length of the barrel. However, a look at the muzzle of the rifles’ barrels showed black streaks on them after firing a few rounds. Those lines were excess lubrication coming out the ends of the rifling grooves. In the years since, Silhouette bullets have left these black lines, no matter if the bullets were traveling 1,600 or 2,100 fps.