Loads for the .30 Carbine

When I first met my wife-to-be, Gail’s father had an Underwood M1 .30 Carbine and several shelves stacked with World War II surplus ammunition to go with it. On Saturday drives in the hills, I took along the M1 and an armload of ammunition. After several dates, Gail and I had shot most of her dad’s ammunition cache at cans and dirt clods and gophers.

That was more than 40 years ago, when surplus .30 Carbine ammunition was inexpensive and plentiful almost anywhere. The majority of that old ammunition has been shot, but commercial ammunition is commonly available to feed many of the 6.2 million M1, M2 and M3 Carbines produced for the U.S. military during WWII. This ammunition costs about 25 cents per round if made with steel cases, and 40 cents per shot for brass case cartridges. Those prices drove me to reloading .30 Carbines.

When handloading cartridges for the M1, I pay attention to bullets, powders and reloading techniques to produce loads that cycle the Carbine’s action and provide top velocities from a small amount of powder with relatively good accuracy.

The standard bullet for the .30 Carbine is a 110-grain roundnose. A handloader can vary some from that weight, but not from the round nose. My Underwood carbine was made in 1942, according to the year of manufacture and serial numbers listed on www.uscarbinecal30m1.com. It has a fairly smooth feed ramp, but the flat nose of Speer 110-grain HP Varminter bullets and the exposed lead nose of Speer 100-grain Plinker RNSP bullets hang up on the feed ramp and jam the carbine. 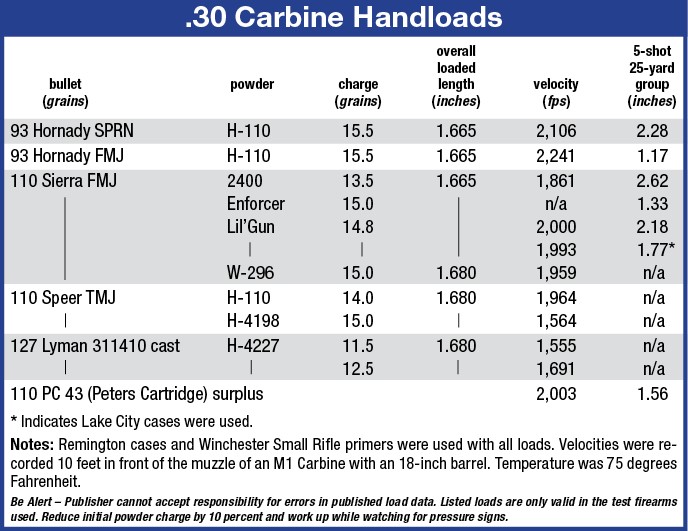 Roundnose bullets with a full metal jacket, or softpoint or hollowpoint bullets with their jacket fairly well enclosing the nose, feed without a hitch. Hornady used to make 83-grain FMJ and 93-grain SPRN and FMJ bullets for the .30 Luger. These bullets loaded with H-110 powder in .30 Carbine cases with an overall cartridge length of 1.665 inches feed smoothly through the M1. Velocity of the 93-grain FMJ bullets over 15.5 grains of H-110 was 2,241 fps. The same charge of H-110 fired the 93-grain SPRN bullets slower at 2,106 fps. Five-shot groups ran a touch over an inch and produced 2-inch groups at 25 yards. That’s not too bad for a Carbine with a trigger pull that has the creep and resistance of a jack handle.

The M1 Carbine is one of the few gas-operated actions that cycles reliably with cast bullets. My Underwood Carbine shoots well with bullets cast of Linotype from Lyman mould No. 311410. These plain base bullets weigh 127 grains. Muzzle velocity is 1,555 fps using 11.5 grains of H-4227. That load, though, does not always fully cycle the action. An additional grain of H-4227 increases bullet velocity to 1,691 fps and always cycles the action. Extreme velocity spread is a low 22 fps for five shots.

This plain-base bullet leaves a thin wash of lead in the bore after 50 shots, but it easily wipes out with a brush and a few patches. Every so often I take off the stock and in the barrel channel is a layer of bullet lube, powder fouling and flecks of lead that have bled through the gas port. The port has never plugged up though, and the carbine keeps chugging right along. A strip of aluminum foil was eventually placed in the barrel channel to catch all that gunk. That fouling could be reduced by casting bullets from a mould that produces bullets that accept a gas check, like the RCBS 30-115-SP, but a gas check adds a good 3 cents to the cost of each bullet.

The amount of powder used in the .30 Carbine case develops a small volume of gas to cycle the M1’s gas-operated action. Powder charges toward maximum help ensure cartridges feed and cases fully eject. Hodgdon H-110 and Winchester 296 powders are the traditional powders for the .30 Carbine. These powders usually produce the highest velocities when shooting 110-grain bullets. Lil’Gun is right up there too. Alliant 2400 reliably cycles the action, but velocity is about 100 fps slower.

Thirty carbine cases in .30 caliber require attention to dimensions for cartridges to feed reliably. The cases are straight-walled and rimless with a headspace on the case mouth. Maximum case length is 1.290 inches. Cases should not be trimmed shorter than their trim length; however, that length varies from 1.280 to 1.286 inches in different reloading manuals. I trim cases to 1.285 inches. A few thousandths of an inch in trimmed case length really makes no difference in headspace fit, as cartridges are held against the bolt face by the extractor.

After sizing, case mouths require expanding to accept a bullet. This flare on case mouths must be sized down and a taper crimp applied when seating bullets. Once again, the proper diameter of case mouths varies by reloading manual, from .331 to .336 inch. PC 43 military cartridges averaged .331 inch in diameter. Case mouths on my cartridges measure .334 inch in diameter, and they chamber smoothly.

Overall maximum cartridge length is 1.680 inches for the .30 Carbine and is the correct length for certain feeding of 110-grain roundnose bullets. Bullets lighter than 110 grains, and bullets with a somewhat flat nose, are often seated to a slightly shorter overall cartridge length. But if you deviate much from the standard 1.680 inch cartridge length, jams begin to occur.

The usual caution when handloading is military cases are thicker and have less capacity than commercial cases, and powder charges should be reduced to compensate. That does not seem to apply to .30 Carbine cases. Sierra 110-grain FMJ bullets had an average velocity of 2,000 fps loaded with 14.8 grains of Lil’Gun in Remington cases. The average velocity was 1,993 fps with the same bullet and powder combination loaded in Lake City (LC) 43 military cases. So case volume of military and commercial cases appears the same.

Accuracy is a relative term when shooting an M1 Carbine. My handloads shot five-shot groups of a bit over an inch to nearly 3 inches at 25 yards. Some of that deficiency can be attributed to the carbine’s terrible trigger pull. That’s okay, because a .30 Carbine bullet carries only enough oomph for varmints at close range. At the least, the pair are a fun and inexpensive way to plink away an afternoon.