There’s much said by hunters about a do-all cartridge that’s perfect for pursuing the majority of the world’s huntable game. As might be expected, beliefs are founded in a mixture of personal experience and conjecture. Among those cartridges commonly fingered for being “all-around” is the .338 Winchester Magnum, and I agree with that selection.

Celebrating its 60th birthday last year, the .338 Winchester Magnum is among the original family of short magnum cartridges; that meaning the cartridge would fit in a standard, long-action rifle as opposed to a magnum-length action required by the .300 H&H Magnum and its parent, the .375 H&H Magnum. This was made possible by restricting the cartridge overall length (COAL) to 3.340 inches – identical to that of the .270 Winchester and .30-06. This aspect alone greatly aided its appeal, as expensive magnum actions were not required to harness the potent round. It’s an everyman’s cartridge.

Serving as its parent case – and for the .264 Winchester Magnum, introduced concurrently – was the .458 Winchester Magnum. It debuted two years earlier in 1956. The belted case was necked down to accept .338-inch diameter projectiles while maintaining its 2.500-inch maximum case length. The resulting case had sufficient taper for smooth feeding, a 25-degree shoulder angle and at .331 inch, a neck that’s a tad shorter than caliber in length. According to Nosler Reloading Guide, 7th Edition, case capacity in grains/water ranges from 70.3 to 78.6 grains. That’s ample volume to contain enough medium- to medium-slow-burning propellants to push substantial bullets to considerable velocities.

In terms of ballistics, the .338 Winchester effectively splits the difference between the various .30 magnums and the .375 H&H. Magnum When loaded with lightweight projectiles, its trajectory is comparable to that of a .300, but with hefty bullets it delivers significant power and penetration. For instance, the Nosler 180-grain CT Ballistic Silvertip can be pushed in excess of 3,200 fps while the Nosler 250-grain AccuBond (or Partition) surpasses the 2,700-fps mark. The latter has a trajectory similar to the .30-06 with a 180-grain bullet, and it also generates more than 4,000 ft-lbs of energy at the muzzle. Best of all, the .338 does so without unobjectionable recoil, though practice is certainly needed to master it.

Several newfangled .33 caliber cartridges have been introduced in the six decades since the introduction of the .338 Winchester Magnum but it’s still popular because it offers enviable terminal and external ballistics, generates tolerable recoil, fits in standard long-action rifles, is less costly to shoot than other .33 magnums and is usually accurate. In fact, Nosler reported that the .338 Winchester Magnum is “one of the most accurate of the big magnum cartridges.” Further versatility and performance can be achieved through prudent handloading.

Component bullets in .338-inch diameter currently span from 160 to 300 grains. This is unequalled in most calibers not utilized on dangerous game. In the past, factory ammunition was available with bullets weighing upward of 300 grains, though options in the 200- to 250-grain range were far more common. Handloaders still have access to 300-grain bullets, though options that’ll stabilize in the 1:10 rifling twist rate common in .338 Winchester Magnum rifles provide slim pickings. Among the best selections are Woodleigh’s Weldcore and full-metal jacket and Nosler’s AccuBond. The former two offer deeper penetration while the latter features a better ballistic coefficient for longer shots. Exhibiting more than 95 percent weight retention, Swift’s 275-grain A-Frame is also a good bet for the bigger bears and moose.

While the focus thus far has been on weighty bullets, the majority of hunters utilize bullets weighing less than 250 grains. There is no shortage of styles and manufacturers offering them. Hornady, Barnes, Nosler, Speer, Woodleigh, Cutting Edge, Sierra, Norma, and Lehigh Defense produce all manner of .33-caliber projectiles. On the lightweight side of that spectrum is found the best options for the smaller “big-game” such as deer and antelope. Don’t be mistaken; all expanding .338-inch diameter projectiles will down a fairly hit deer with authority, but some are designed for lighter game, and they will shooter flatter to boot.

In working up loads for this article, I settled on a recipe that pushed the Barnes 160-grain TTSX to 3,090 fps for 3,392 ft-lbs. That’s much faster than the 7mm Remington Magnum can propel a bullet of identical weight. Ballistic coefficient favors the 7mm, though. Other good choices for hunting light game at long, yet sane, distances include: The Hornady 185-grain GMX, Barnes 185-grain TSX, Speer Hot-Cor 200-grain soft point, Nosler 180-grain AccuBond and the 200-grain CT Ballistic Silvertip.

Outside of the leadless options mentioned above, when pursuing large, tough quarry such as elk, moose, bear, nilgai, gemsbok, eland, and kudu, among others, bullets in the 200- to 250-grain range are the best bets. Premium options abound in this class; the AccuBond, Partition, Grand Slam, Scirocco II, A-Frame and ELD-X are all well suited for these stout species. Although I’ve long been smitten with the Speer 250-grain Grand Slam for across-the-board use in the .338 Winchester Magnum, the reality is that quality 225- to 230-grain bullets are equally as capable but offer somewhat less recoil and a flatter trajectory. As such, they’re better choices for across-the-field use.

When using lead-free bullets, a hunter can step down in weight and achieve similar (if not better) penetration and higher velocities than heavier, lead-core projectiles provide. One caveat: Ensure that your chosen leadless bullet will stabilize in your .338 Winchester Magnum; many heavyweight, all-copper and -brass bullets were made for the .338 Lapua Magnum, which typically has a faster twist rate. Such bullets often won’t stabilize in a 1:10 rifling twist.

Concerning propellants, the .338 Winchester isn’t finicky. In fact, Hodgdon’s website currently lists 22 different powders from Hodgdon, IMR and Winchester that can be used. And, while stalwarts such as IMR-4350 and IMR-4831 (the latter a longtime favorite of mine) remain good choices, don’t be afraid to try something new. Enduron-series propellants, for example, offer good external ballistics with the added benefit of temperature insensitivity and a de-coppering agent. Consistent velocities across a range of temperatures are beneficial for a cartridge designed to be pitted against large and potentially dangerous quarry.

Beyond the Hodgdon repertoire, Alliant has a sizable stable from which to choose. Longstanding favorites such as Reloder 15, 17, 19 and 22, are still great choices. However, for the same reason I suggest IMR Enduron-series propellants, so too do I recommend Reloder 16, a temperature-insensitive powder with a decoppering additive.

Ramshot Big Game and Hunter are particularly well suited to the .338 Winchester, and so are Accurate 4350 and 2700. Vihtavuori lists N160, N165, N550 and N560 as appropriate propellants. Relatively new to the American marketplace is French-made Vectan powders. Within its extruded “Tubal” line of rifle powders, 7000 and 8000 are great high-performance, low-cost options. I’ve used them in several cartridges and I’ve been impressed. As can be seen, there’s no shortage of powders that work well in the .338 Winchester Magnum.

Despite the cartridge’s popularity, there are relatively few companies offering new component .338 Winchester Magnum brass, and it’s costly. Remington and Winchester are the least expensive brands, though Remington is inconsistent in producing it. Fortunately, I was able to buy several bags of Remington brass from a retail store for load development. Outside of the abovementioned companies, expect to pay $1 or more per case. At MidwayUSA, Hornady, Nosler and Norma .338 Winchester brass costs $1, $1.68, and $1.76 per case, respectively, and at Graf & Sons Australian-made Bertram cases sell for $1.15 apiece?

Few hunters and shooters use a .338 Winchester rifle for high-volume shooting, so it’s unlikely a handloader will put much wear on the cases in short order. In developing data for this piece, the two 50-count bags I purchased were each loaded multiple times with zero loss.

Handloaders often only neck size belted cases to increase their longevity. Unless it’s for range use only, I wouldn’t suggest that practice for the .338 Winchester Magnum. Because the cartridge is primarily used for big-game hunting, it must cycle flawlessly each and every time, especially if pursuing dangerous game such as grizzly or brown bear. Using quality, full-length sizing dies will ensure smooth cycling without being detrimental to accuracy. 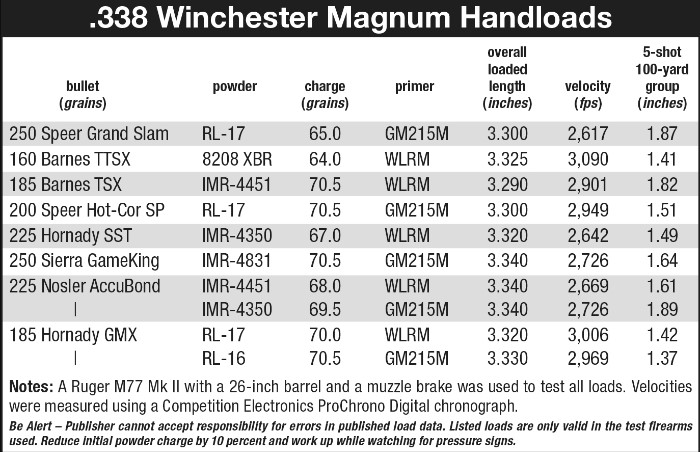 It’s a good idea to apply a roll crimp when seating bullets with a groove or a cannelure. Recoil generated by a .338 Winchester can cause bullets of in the magazine to become deep seated, thereby affecting performance and functioning.

The .338 Winchester Magnum is a true classic cartridge in every sense. It’s performance on all but a handful of species worldwide is convincing. For the traveling hunter who is able to handle its recoil, it’s among the best choices for pursuing a variety of game.