The 7mm-08 Remington shoots well with the entire range of 7mm big-game bullets from 120 to 175 grains. Many years ago I settled on 140-grain bullets as the best balance of trajectory and penetration for game from pronghorn to elk in the 7mm-08. I continued to read various handloading books and eavesdropped on the Internet chatter in hopes of finding the perfect load for when mule deer stand on the far side of a park and pronghorn antelope fidget at the distant end of a basin. That input pointed toward handloading 120-grain bullets in the cartridge. That weight for big game hunting bullets includes the Nosler Ballistic Tip, Sierra Pro-Hunter and Barnes Triple-Shock (TSX) and Tipped Triple-Shock (TTSX). Hornady designates its V-MAX bullet for varmint hunting.

I loaded seven different powders with Nosler Ballistic Tip, Sierra Pro-Hunter and Barnes TSX bullets. Of those powders, Big Game, CFE 223 and W-760 provided the highest velocities. CFE 223 was the velocity leader with Nosler Ballistic Tip and Sierra Pro-Hunter bullets. In fact, velocities were about 100 fps faster from the 22-inch barrel of my New Ultra Light Arms Model 20 7mm-08 Remington than those listed by Hodgdon from a 24-inch barrel. 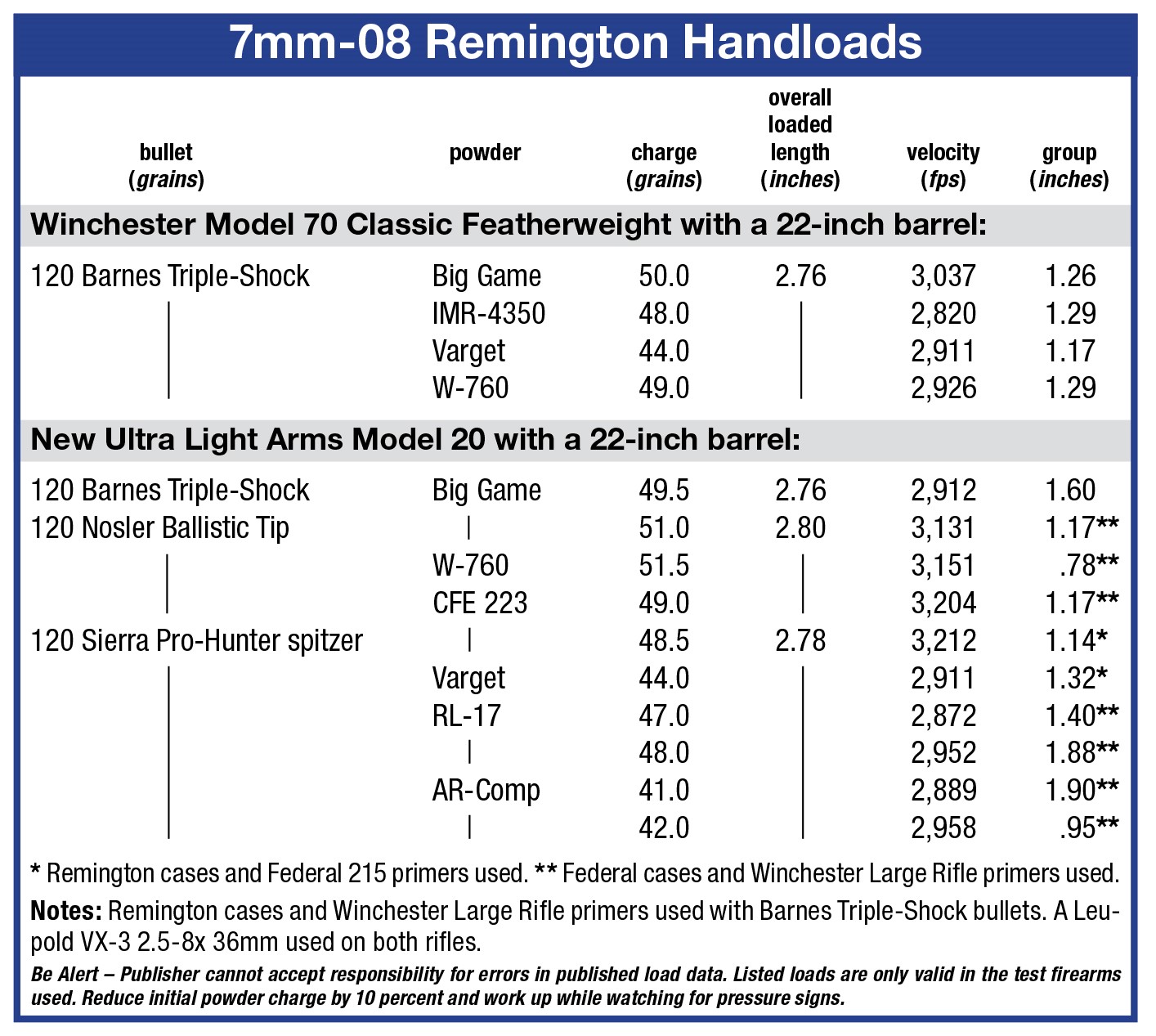 The New Ultra Light rifle shot well with various powders paired with the three 120-grain bullets. W-760 is a good first choice powder, because it has provided good accuracy from all the 7mm-08 rifles I have shot. Big Game and CFE 223 are also good choices, and velocity is right up there.

A Winchester Model 70 Classic Featherweight didn’t seem to show a preference for a particular powder. With four different powders, the rifle grouped Barnes TSX bullets on the wide side of an inch. That’s how the rifle performs with about any load it shoots.

The 120-grain loads were compared to my standard 140-grain bullet loads to make sure I wasn’t leaving anything on the table, trajectory and energywise. The top velocities for 140s was 2,900 fps at the muzzle of the New Ultra Light rifle. The 120s start out about 300 fps faster. That additional velocity results in both bullets arriving at 400 yards carrying about the same foot-pounds of energy, 120s shoot 5 inches flatter at 400 yards and 8 inches flatter at 500 yards than the 140s.

While evaluating figures, let’s compare the 7mm-08 Remington shooting 120s with the same weight bullet fired from the 6.5 Creedmoor, the cartridge everyone is swooning about. The fastest I have been able to fire any 120-grain bullet from a 6.5 Creedmoor is Nosler Ballistic Tips at 2,895 fps with 43.0 grains of Big Game. That was from the 22-inch barrel of a Bergara Premier rifle. In contrast, 8.0 more grains of Big Game loaded in the 7mm-08 pushed Nosler 120-grain Ballistic Tips 3,151 fps from the 22-inch barrel of my New Ultra Light Arms Model 20. The Model 20 fired Ballistic Tips at 3,204 fps with 49.0 grains of CFE 223. The additional 300 fps generated by the 7mm-08 firing 120-grain Ballistic Tips resulted in 9.3 inches less drop at 500 yards and 174 foot-pounds of additional bullet energy compared to the 6.5 shooting the same weight Ballistic Tips. That’s a fair trade for 6.0 additional grains of powder.

Last summer I loaded a box of 7mm-08 cartridges with Barnes 120-grain TSX bullets and 50.0 grains of Big Game in anticipation of the fall deer and elk season. My Winchester Model 70 was sighted in with the load, and I anxiously waited for the leaves to turn golden on the quaking aspens. I wiled away my time reading a big game hunting site on the Internet, and what one expert posted there about the 7mm-08 Remington shooting Barnes TSX bullets worried me.

He wrote that TSX bullets fired from the 7mm-08 were a little too stout for all-around work on medium game. This does not mean that the Barnes bullet does not readily expand; to the contrary, wounding through vitals is ideal, the "expert" wrote. He further stated the problem with using the TSX bullet on lighter game is that the trauma does not occur immediately upon impact or during exit wounding, and if the TSX is to be used on lighter, medium game, bullets should be placed to break major bones and locomotive muscles in order to effect immediate incapacitation.

So if I read the expert correctly, TSX bullets do not start to expand until they have penetrated rather deeply, and they end up with a narrow frontal diameter when they exit an animal. So if I took the expert’s advice, was I supposed to shoot a deer through the shoulder bones? Or even better, though the hindquarters and femur bone?

On larger game the expert wrote that TSX bullets fired from the 7mm-08 would undoubtedly penetrate deeply on a broadside shot. “… although, such a practice should be considered unethical due to the small diameter of the wound.”

If this fellow was right, I would be taking a risky chance shooting an elk with the Barnes bullets. His advice withstanding, I forged ahead.

I hunted mule deer every day possible over several weeks during November. My Winchester Featherweight never weighed me down while hiking the mountains and foothills. One evening I sat on a ridgetop glassing the edges of timbered draws for deer. A mule deer doe trotted out of the trees, followed by a buck with a wide sweep of antlers. The deer stood still; I put the rifle over my pack and lay behind it to shoot. I figured the range at 400 yards. The scope’s crosshairs were coming to bear on the buck when the doe ran back into the draw, with the buck right behind.

I marked the draw by a dead pine and hurried down the hill, but the deer were gone when I peeked over the lip of the draw. I stepped ever so slowly along, looked to the left and saw the buck standing there watching me from 40 yards. The rifle came up and pointed as if on its own. The deer fell at the shot and never moved. Small wonder the deer died on the spot, because the bullet had hit it in the base of the neck, turned the lungs to soup and then exited out the rear ribs.

The next week I started walking up the mountain an hour before daylight for elk, glassing the country at first light. Far below elk grazed along the edge of a park; I had walked right by them in the dark. I hurried down the hill. The timber opened up about 300 yards above the elk, and I kneeled against the roots of a fallen tree and steadied the rifle along the trunk. Twelve cows and calves and two bulls fed along in and out of the trees. When an elk stopped it was always behind a tree. The elk finally drifted out of sight around the curve of the hill.

It took forever to make my way down through the deadfall to the hill where the elk had disappeared. At the crest of the hill, I saw the back of an elk. I took another step, and a cow stood grazing with its head down. A red bloom appeared tight behind the elk’s shoulder where the little Barnes bullet hit. The elk whirled and was gone into the trees and behind the hill. This could be a problem, I thought, remembering the expert’s advice, but the elk lay dead not more than 20 yards from where it had been shot. The bullet had hit the elk squarely through both lungs and gone out the ribs.

My time at the reloading bench, shooting bench and finally hunting deer and elk showed 120-grain bullets fired from the 7mm-08 Remington are certainly an alternative to the 140-grain bullets that have been standard for years. A box of 7mm-08 loaded with Nosler 120-grain Ballistic Tips and W-760 are waiting for antelope season. Perhaps out on the wide open prairie a long shot will present itself where the 120’s flatter trajectory will more than prove its worth.