I worked a second job to save for my first pronghorn and mule deer hunt out West in the fall of 1982. The hunt would take place just north of Jordan, Montana. Since this was my first time out West for antelope, cartridge choice was an important consideration. I had read how unpredictable antelope were, and I was determined to get close enough to use a more conservative cartridge. The magnum craze was in full swing, but I wanted the challenge of getting close enough that a rifle chambered in .250 Savage or the .257 Roberts would fill the bill. As it turned out, the .257 Roberts was chosen because I had obtained a rifle about a year earlier.

The rifle was a Winchester XTR Featherweight that became available through a strange set of circumstances. At the Orvis flagship store in Manchester, Vermont, I found a brochure at the counter highlighting the rifle. Back home, I called the Winchester public relations office. According to Johnny Falk, in a letter dated in the last quarter of 1980, the information in the brochure " is still not ready for publication." It seemed that the company was testing acceptance of such a reissued rifle with extra detailing (hence the XTR designation) in a number of small geographical areas, and Vermont was one of them. A rifle was sent to me several months later and was used successfully on antelope the following year.

The .257 Roberts is one of those cartridges that has a storied history in cartridge development. Noted gun and cartridge experimenter – Dr. Franklin Mann – was indeed a very important part of the .25-caliber concept. Ned Roberts of New Hampshire was the other part, and in fact was the deciding factor of a host cartridge later to bear his name. At the time of this cartridge’s infancy, Dr. Mann conceded – after much experimenting – that existing powders of the day would perform much better under a .25-caliber bullet if the case capacity matched closely to that of the .30-40 Krag.

Roberts went to work while considering Mann’s views on the subject. His choice in brass was the 7mm Mauser necked down to .25 caliber. Roberts, in his initial attempt in designing this new cartridge, wanted it for small game and varmints hunted at longer than normal shooting distances. Townsend Whelen mentioned in one of his many books: “I think that no man ever spent so much time in perfecting a cartridge as Mr. Roberts spent on this one.”

According to the history I’ve read, Roberts worked with F.J. Sage on the project, assisted by Townsend Whelen, A.O. Niedner and L.C. Weldin of Hercules Powder Company. Around 1909 they completed the project with the 7mm Mauser case necked down to .25 caliber complete with a 15-degree shoulder angle. Less than a decade later, the Niedner Rifle Company started turning out rifles in .25 Roberts but with the case extended 1/16 inch to increase powder capacity.

In 1934, Remington Arms showed interest in the cartridge, changed the shoulder angle to 20 degrees and paved the way to full commercialization in the same year. The company’s first rifle was the Model 30 bolt action. A short time later, Winchester chambered the cartridge in both the Model 54 and Model 70 rifles. As a matter of note, the cartridge at this time was used only in bolt, single-shot and pump guns.Elmer Keith was another .257 Roberts supporter of sorts. Both Jack O’Connor and Warren Page also had high praise for the .257 Roberts, but differed somewhat when it came to the subject of reloading the cartridge.

The Model 70 XTR Featherweight I took to Montana was fitted with a Leupold Vari-X III 2.5-8x scope. It features a straight-grained walnut stock, a handy 22-inch barrel and fleur-de-lis checkering. Its trigger broke at 3.25 pounds right out of the box. For a while, Ruger chambered the Roberts (starting in 1975) in the Model 77 and later, the Ruger No. 1. Browning did the same in its BLRs. Winchester does not presently list the cartridge in any current rifle that I know of. Today, few commercial rifles are available. Custom builders like Shaw Custom Rifles can help.

When working with the .257 Roberts and my Model 70, I choose to go the handloading route. Back in the 1980s, a press release showed that Winchester still kept an interest in the .257 Roberts by introducing a +P version of the cartridge. Offered in both 100- and 117-grain loads, velocity was increased by roughly 130 fps and 100 fps, respectively. Energy increases were nothing to brag about.

While this is all well and good, the .257 Roberts deserves to be handloaded for use in the field. There is no shortage of .25-caliber bullets. Primers are available in spades, and I had no trouble finding new, unfired brass. When it comes to powders, because of its moderate case capacity of roughly 53.0 grains of water, many modern powders work well in the Roberts. I wound up with more than a dozen powders to test, from Benchmark to IMR-7828. Over years of using the Roberts on game from summer woodchucks to bigger game out West, I found this cartridge extremely adaptable to most powders in the medium burning range.

Basic components for the .257 Roberts are generally easy to find. In addition, Winchester and Hornady still turn out factory ammunition. Since the Roberts has been around for quite a while, once-fired brass can still be had at good prices at gun shows. If you really get in a bind, purchase some 7x57 brass, neck it down to .25 caliber and fireform it to your rifle.

For primers, stick to standard brands. Magnum primers are not needed simply because of the Roberts’ conservative case volume. For reloading duties, I use Winchester Large Rifle primers that give excellent results. When it comes to sizing, I prepare all cases as if I was going to use them for hunting. I full-length size all the cases, not just the neck, as I want to make sure they will work in the action. The sizing die is set to bump the case holder, then I try each case in the chamber of the Model 70. After that, all cases are checked for length, and if they do not come in around 2.223 inches, they are trimmed back to meet this number for consistency.

Everyone likes to try various powders in their loads for testing. For this project, I explored many I did not have the opportunity to try in the past. There is no need to “magnumize” the Roberts, even when using so-called +P brass. This cartridge is at its best when loaded slightly below maximum as the extra powder does not help accuracy, velocity or wear and tear on the rifle or shooter. For the record, every load was dropped from a RCBS powder measure just short of the target charge weight and trickled up accordingly.

First on the list was IMR-3031 with lighter bullets. Hodgdon Benchmark and H-335 were neck and neck, with IMR-4895 following suit. In looking up reference material, I found that in the Complete Guide to Handloading, Phil Sharpe seemed to favor the .257 Roberts and IMR-4064 powder with a load of 41.0 grains under a 100-grain bullet, and I tried it with a Swift bullet. Although accuracy was not impressive, velocity was high. Varget seems to be a barnburner with a 75-grain bullet, so I tried 41.0 grains for a velocity of around 3,400 fps.

Winchester 760 and Hodgdon H-414 were on the list, and since the latter powder had not been used for quite a while, it was included. Hodgdon 4350, IMR-4831, Alliant Reloder 19 and IMR-7828 rounded out the list. Lighter bullets from 75 to 90 grains included hollowpoint, spitzers and even a box of moly-coated hollowpoints I had in stock for some time. One hundred-grain bullets from Hornady, Swift, Nosler and 117-grain Hornady boat-tail Spire Points rounded out the selection. All bullets were seated to the recommended overall loaded length of 2.780 inches. Group sizes and velocities are listed in the table. As usual, some bullets grouped better than others, and most loads were accurate enough for field shooting. 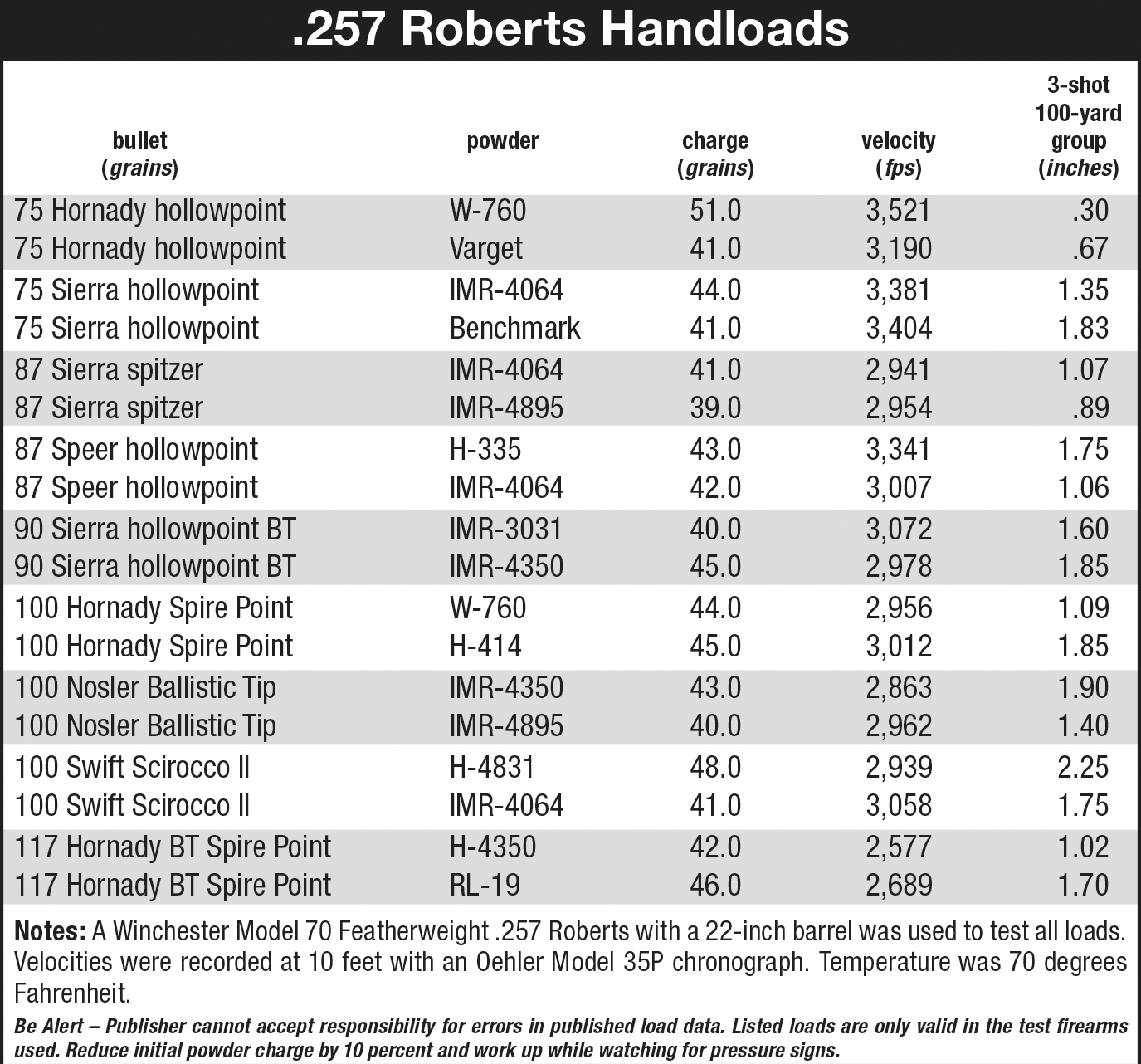 Looking back at my records, the handload used in Montana included Hornady 117-grain Spire Point bullets loaded over 42.0 grains of H-4350 at 2,599 fps. Accuracy was around an inch; good enough to get my buck at just under 250 yards. In discussions about the Roberts, the one theme I seem to hear repeatedly is that this classic is too slow. Well, okay, maybe. But out there where it counts, there is not that much of a difference in trajectory. I for one limit my long-range shooting to 300 yards or less. If we take the Roberts with a 100-grain bullet at 3,000 fps and zero the rifle for 200 yards, bullet drop at 300 yards is only 7.2 inches. Now load the same bullet weight in the .25-06 Remington and pump it up to 3,300 fps, with the same 200-yard zero drop at 300 yards is 5.8 inches, a 1.25-inch difference. I can’t think of any situation in which this could make that much of a difference on a medium-framed animal over the length of a football field.

I noted more than 30 years ago that some renowned gun writers casually mentioned the Roberts was on the way out. It may not be as popular, but it’s not dead. It’s simply too much fun to shoot!