In 1964 the U.S. military adopted a new service cartridge known as the 5.56mm Ball Cartridge M193, while Remington announced the .223 Remington cartridge, a commercial version, at essentially the same time as the military’s official adoption. Like most previous military cartridges, its success among civilians was inevitable, and today its popularity continues to grow. It has been chambered in a variety of rifles ranging from bolt, lever and single shot, but the M-16/AR-15 rifle’s popularity among civilians has been incredible, especially in the past decade or two. Recent shortages in .223 ammunition have driven many to begin handloading, while others just want to save money. Various competitions have also driven the AR-15 popularity, but to be truly competitive one must handload to get the most from the rifle/cartridge combo.

Handloading the .223 cartridge for use in AR-15 rifles is straightforward, but there are some facts that handloaders should be aware of before assembling loads. For instance, early rifles featured a one-in-14-inch rifling, but that twist rate was soon discontinued in favor of a one-in-12-inch twist that better stabilized 55-grain bullets, especially at longer ranges. In conjunction with military ammunition changes (to 62-grain bullets), the rate was again changed to a one-in-7-inch twist, which stabilizes heavier bullets up to 80 grains but does not generally perform well with lighter versions weighing 55 grains or less. They not only fail to properly stabilize, but also many frangible varmint bullets leave the muzzle turning around 330,000 rpm and essentially disintegrate in midair, failing to reach the target. To make this subject even more interesting, a number of AR-15s are offered with one-in-9- and one-in-8-inch twist barrels. And recent select barrels feature a one-in-6-inch twist, designed specifically for 80- and 90-grain bullets. In two future issues of LoadData.com, we will offer handloads for AR-15s featuring one-in-9- and one-in-7-inch twist rates and tips for loading them. Today, however, it seems prudent to offer loads for barrels with the one-in-12-inch twist. 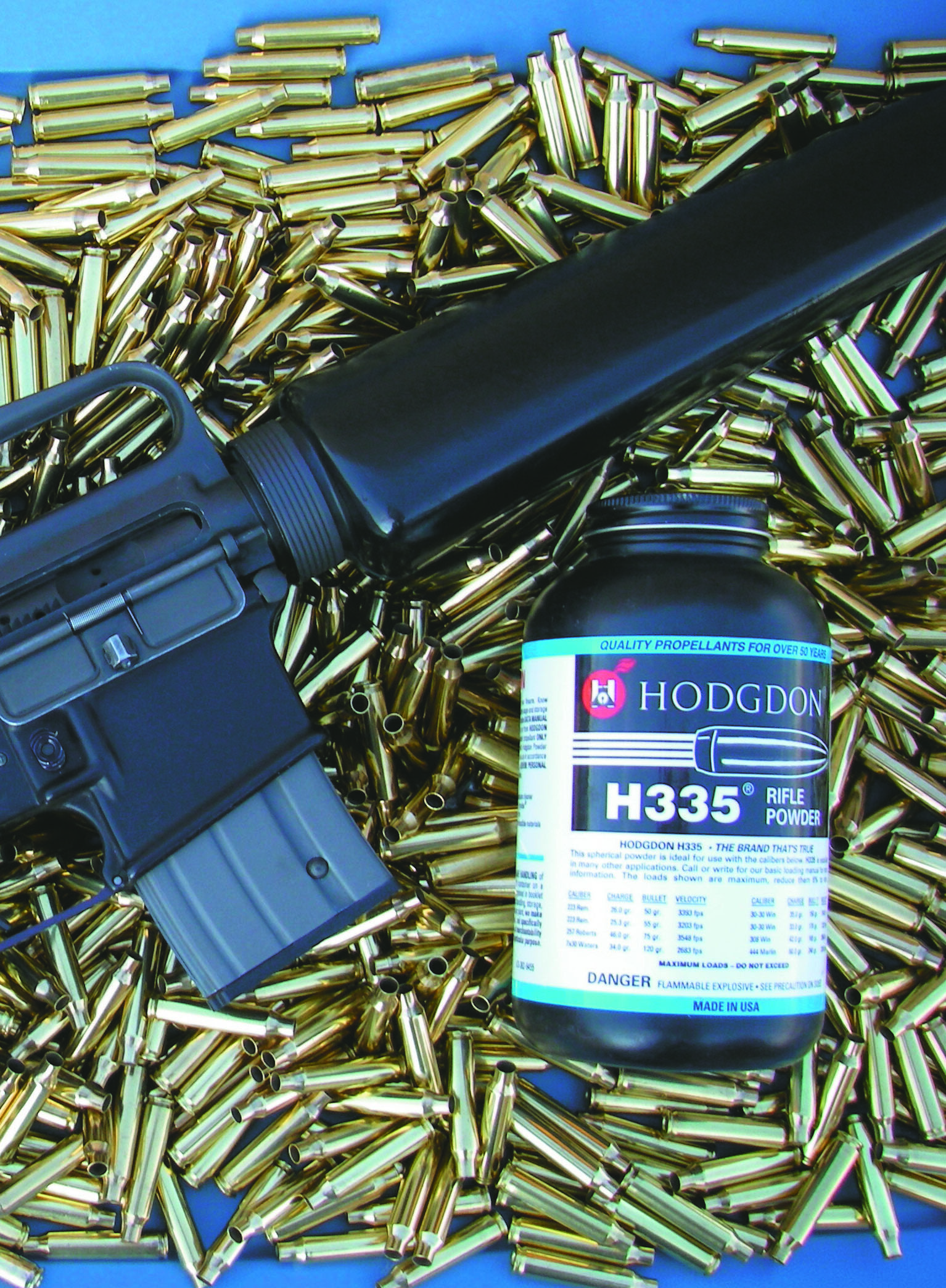 The action and gas operation system of the AR-15 presents some additional challenges to handloading the .223 Remington that common bolt-action rifles so chambered don’t face. For instance if a cartridge is not properly sized for easy “drop-in” chambering, the bolt closing force of the AR-15 is weak, and therefore the round will not chamber, thus tying up the rifle. Many recommend the use of a “small base” sizing die to assure that the case fits easily into the chamber. This approach works, especially if loads are to be used in multiple rifles, but I have also used standard full-length sizing dies for cases that were fired from a given rifle and will be again fired in that same rifle. This approach tends to work the case less, giving longer case life and results in excellent accuracy. Regardless which approach is taken, sized cases (as well as loaded rounds) should chamber easily. A case gauge (available from Midway and Dillon) will help assure that cases are sized correctly for reliable

Bullets should be crimped – even those without a cannelure. The cartridge’s trip from the magazine to the chamber is rather bumpy or rough, which can batter rounds, deforming bullet tips and can even seat bullets deeply into the case (on top of the powder charge) if they don’t have enough pull. This is a dangerous situation, as pressures can rise significantly, which can damage the rifle and injure the shooter. For those two reasons, I suggest crimping all .223 ammunition that will be used in an AR-15 (with the exception of specialty loads that will be fed in the “single-shot mode” and are not today’s topic). Bullets with a cannelure usually allow a fairly deep crimp. It is suggested to study the crimp on factory loads from Federal and Winchester and try to duplicate them. Bullets without a cannelure cannot receive as great a crimp, but crimp as much as they will allow without deforming or buckling the case and without damaging the bullet. Another tip to prevent bullets from seating deeply during the cycling process includes using an expander ball that measures .215 inch, which will offer a tighter pull on the bullet in addition to the crimp.

The AR-15 gas system thrives on powders that produce enough pressure and gases to reliably operate the action but does not like being overworked from the use of a too slow burning powder. A too fast burning powder might produce enough pressure and velocity but might fail to cycle the action reliably. For example 22.0 grains of IMR-4198 powder behind most 55-grain bullets is a safe, maximum load in a bolt-action .223, but it won’t cycle the action of many AR-15s. In this respect medium burn rate .223 powders have proven the most reliable. Examples include Winchester 748, Hodgdon H-335, BL-C(2), H-4985 and others with a similar burn rate. Too slow burning powders can overwork the gas system, so choose carefully.