It was developed in close cooperation with rifle manufacturers Swiss Grunig and Elmigar AG. The cartridge found its way into the hands of American shooters both as a target round and a fine medium big game cartridge. The 6.5x47 Lapua is a flat-shooting cartridge, for its size, and outperforms the .308 Winchester and many other target cartridges currently used in long range shooting. The selection of premium target and hunting bullets is good too.

Arguably, most any new cartridge in 6.5mm would have been welcomed by American shooters at the time; U.S. manufacturers had dragged their feet long enough. Nearly 60 years ago, Winchester surprised the shooting public with its introduction of the .264 Winchester Magnum. The potent cartridge would drive a 100-grain bullet 3,600 fps, or a 160-grain bullet over 2,900 fps. The cartridge was overshadowed, however by the introduction of the 7mm Remington Magnum in 1962. Still, shooters and handloaders longed for something better in the 6.5mm bore and a much needed selection of improved 6.5mm bullets. The fascination for higher velocity would be eclipsed by both accuracy and bullets with downrange superiority.  It was apparent the 6.5mm bore could offer this; and barrel burning velocity obviously wasn’t the answer.

Gradually the door opened for a few, much better cartridge choices of both American and foreign manufacture in this long-awaited caliber. As more of these 6.5mm cartridges and bullets came on the scene, I worked with several of them. Among these cartridges were the 6.5-284 Norma, .260 Remington, 6.5x55 Swedish Mauser, 6.5mm-06, a new cartridge of my own creation named the 6.5x42 NEJ Super Grouper (born of the modified Winchester Super Short Magnum series) and more recently the 6.5x47 Lapua.

As the 6.5x47 Lapua cartridge is a very well proportioned, medium-size case with a short powder column. The case has annealed necks and a very hard base construction that fits a standard .30-06 size bolt face. Though smaller in capacity than the .260 Remington and the 6.5x55 Swedish Mauser, the cartridge can be loaded to velocities that parallel these close counterparts. Small rifle primers are used in this case, either standard or magnum. A wide range of today’s medium burn rate powders are adaptable to the 6.5x47 Lapua, which is largely dependent on bullet weight and shape and bore dimensions. It’s not a fussy cartridge, and accuracy appears easy to come by.

There are currently precious few reloading manuals that cover the 6.5x47 Lapua. Berger Bullets 1st Edition Reloading Manual (2012), the Vihtavuori Reloading Guide for Centerfire Cartridges and Western Powders Reloading & Load Data Guide, are among the three I have.  Perhaps Sierra, Hornady, Alliant, Barnes, Hodgdon, et al, will join in later. There is some Internet loading information that may also be helpful to some. I did, however, manage to compile sufficient load data largely from these three manuals, and 57 years of handloading experience came in quite handy too.

For testing the 6.5x47 Lapua, match-grade rifles were used, one a Model 70 Winchester and two others on Remington Model 40X actions. All three were equipped with match-grade triggers and target/varmint scopes with rigid, Picatinny mounting systems. I chose to go with barrels by Krieger, Criterion and E.R. Shaw. The 26-inch Krieger barrel is a four-groove with single point cut rifling. Bore diameter is .256 inch with a .264-inch groove diameter.  The 27-inch Criterion barrel has six grooves with button rifling; bore diameter is .2555 inch with .2638-inch groove diameter. The 26-inch E.R. Shaw varmint weight barrel has button rifling with six lands and grooves. I didn’t get the specs on the bore and groove. Each barrel has a 1-8 rifling twist, which is required for use of longer, heavier 140-grain and higher BC bullets.

One of Dave Manson’s precision reamers was used to cut the chambers to within SAAMI specifications. This resulted in a .2915-inch chamber neck diameter and sufficient leade length to accommodate 142-grain, standard ogive bullets while not seating the base of the bullet too deeply into the case. A loaded bullet with a .0125-inch neck wall would result in a .289-inch case neck diameter. Though each rifle had 100 prepped cases, I made headspacing such that each chamber would handle fired cases from another rifle.  All cases were trimmed to 1.840 inches and neck walls lathe-turned to .0125 inch within near zero runout. Cases would be closely monitored on repeated reloading to avoid neck wall thickening.

On hand were 32 different bullets ranging in weight from 95 to 142 grains.  Bullets weighing from 120 to 130 grains are reported to provide optimal balance between velocity, accuracy and wind-deflection for long-range performance.

Redding handloading equipment was used in loading. A Redding in-line 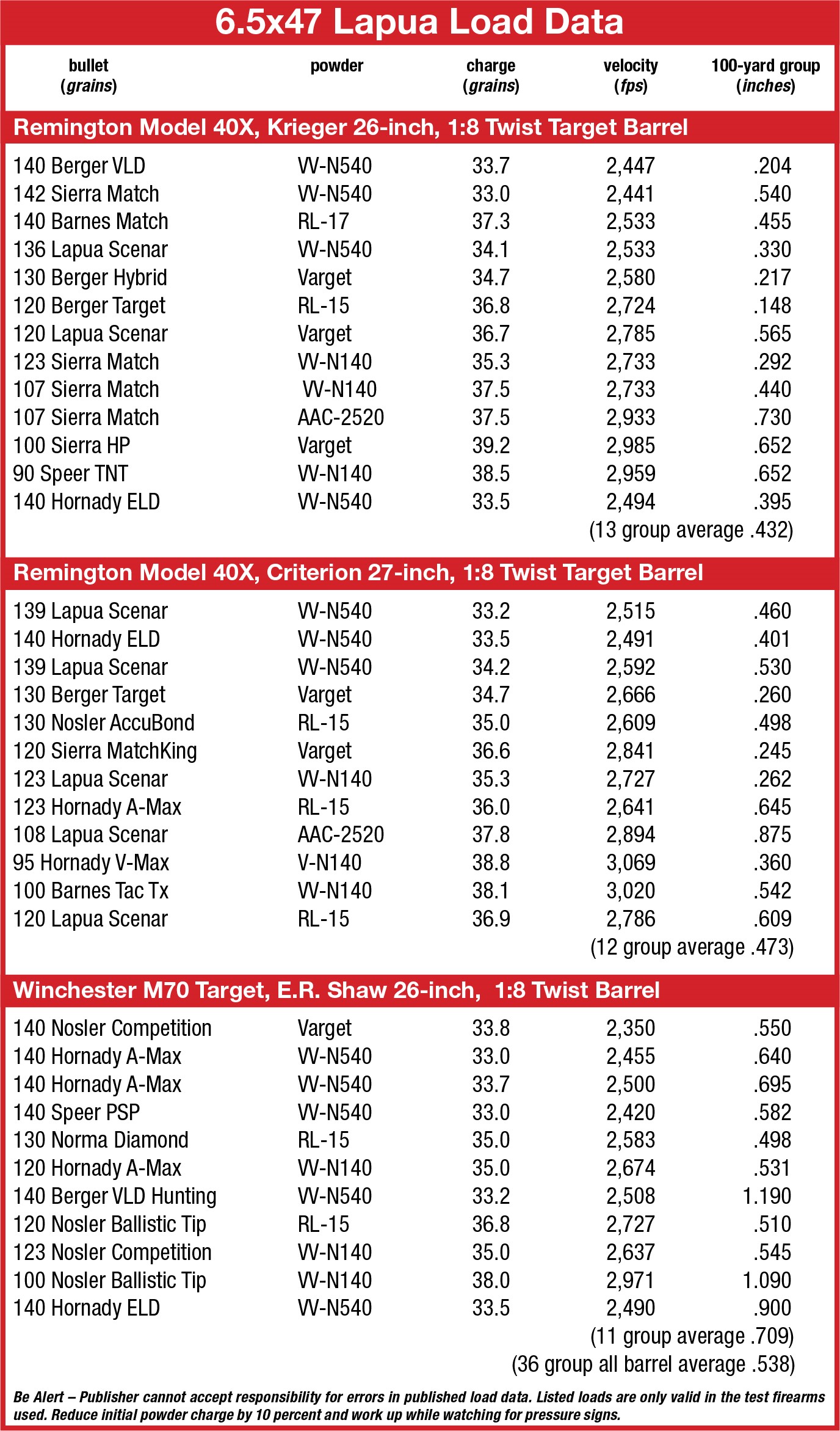 competition seating die was used to seat all bullets just short of land contact. [Norm has handloaded and chambered his own rifles for nearly 60 years and seats bullets to suit his experience. As such, there are no cartridge overall lengths supplied here, so handloaders should reduce powder charges accordingly and work up toward the charges listed while watching for pressure signs. – Ed.] As a quick, sure way of attaining desired seating depth, my short chamber seating checker serves a vital role. Here I used a short section of barrel that was reamed to the case datum line. This little gem was made from the 2-inch, cut-off muzzle section of barrel. I used the same reamers for this as used in chambering the barrel. Precise seating depth can be determined in a matter of seconds in this way. I have these for nearly all cartridges I load for, and it saves lots of time when changing bullets often.

Each thrown charge is weighed with a conventional powder scale, which takes only a few seconds per case. As a further control measure, I frequently examine loaded cartridges for coaxial run-out, having built a universal machine to precisely check three points of a loaded round for case head, neck and bullet eccentricity all at the same time. I have found that multiple inspections of any loaded cartridge for coincident axis can nip many problems in the bud.

In arriving at a workable load for each bullet and barrel, I always stayed within the pressure parameters of the cartridge while in search of best accuracy. While I did conduct some proof load testing on the 6.5x47 Lapua cartridge, this was for my own information.  I refrained from pushing the velocity envelope on the 6.5x47 Lapua cartridge. Many of these loads closely approximated 97 percentile of maximum listed loads found in the handloading manuals I had at hand. Your own formulated handloads must be perfected with caution.  Be constantly mindful of high pressure signs in handloading any cartridge.

Incipient signs of case head expansion or separation must also be observed. I can offer this caveat for those courting high pressures with any case, including the 6.5x47 Lapua. While the Lapua case necks are annealed, the base and web area of the Lapua cases are very hard and durable and are likely to respond differently to case head or web expansion measurements. In general, it’s time for further investigation when any case head expansion reaches .0004 inch or, if belted cases reach .0002 inch.  Any older, work-hardened cases can also pose a measurement problem, as does method or equipment used in taking these measurements.

In taking these critical measurements, I strongly recommend the use of a good micrometer over the commonly used Vernier caliper and to learn precisely how to interpret the outcome.

A review of the accompanying load data reveals impressive performance while staying within workable pressures. The outcome of testing three different barrels along with 32 different bullets and a number of different powders culminating in a 0.538-inch accuracy aggregate is outstanding performance by any standards.

Few cartridges that I have worked with have shown more promise or have been easier to load for. In one random series of tests, the Krieger barrel was pitted against the Criterion barrel with 140- and 142-grain bullets. Following 24, five-shot groups, averages were .338 and .333 MOA, respectively.  There wasn’t a group as large as .5 inch among these. From 300 yards and beyond, accuracy and trajectory held up very well too. Bullets designed for this purpose easily remained in the .300- to .400-MOA range.  Shooters will be very well pleased with a cartridge in 6.5mm that can deliver this level of accuracy and performance.