There have been a few attempts to make segmented bullets that would separate into several projectiles when they entered flesh. At first glance that doesn’t sound like a bad idea, but there were some issues. Foremost of these is the fact that lead is ductile and would rather stretch than split, so it was hard to make the segments do much in individual penetration, and overall penetration was usually considered less than optimum.

The problem is nobody knows, or can know, what is ideal, because no two shootings are exactly alike. The best idea seems to have come from the FBI’s ammunition test series that established a minimum of 12 inches for acceptable penetration. Does that mean a bullet that only goes 11.5 inches is bad? Not in the real world, but if one is trying to establish an acceptable, objective performance level there has to be a line.

One of the issues with fragmenting bullets is that the pieces are often small and have very little mass, which inhibits penetration. The real bottom line: The bullet must penetrate deeply enough to reach vital structures. If taught to shoot “center of mass,” that means the chest, and from the side that can easily be 12 inches.

Cutting Edge Bullet Co. has a different approach to the segmented projectile. It is CNC machined from solid copper and has a vast hollowpoint cavity that is bisected by two saw cuts. These create four segments that can break away from the central core and become separate “projectiles.” There is no easy way to determine the velocity of these pieces, but the company’s gelatin tests show they separate from the core at about one to 2 inches of penetration then individually penetrate about 5 inches radially from center. The remaining solid segment, basically shaped like a full wadcutter with a sharp edge, continues to penetrate 12 to 15 inches in 10 percent ordnance gelatin.

Sadly, I no longer have facilities for gelatin testing but wanted to recover a couple of bullets. A few were fired into gallon milk jugs, resulting in a couple of discoveries. Foremost is that you get wet. Next was that the petals all exited the first or second jug and were lost. Base segments were all recovered in the third jug.

I requested Cutting Edge to send some recovered bullets in 9mm, .40 and .45 for measurement. The recovered base was simply a wadcutter-shaped piece of copper, and the petals were rectangles that were remarkably similar. Three recovered bullets from each of the calibers (9mm, .40 S&W, .45 ACP) were measured, and the average dimensions are reported in Table I.

A reader once sent a nasty letter accusing me of lying, because he had shot the round I was talking about into an oak tree and was mad because it didn’t expand. As it is with any hollowpoint projectile, hydraulic pressure, directed outward from inside the hollowpoint, is required to initiate expansion. Study most conventional jacketed hollowpoints, and you will see some lines called “skiving” cut into the jacket. They are there to “weaken” the jacket to make it expand in a predictable manner. Cutting Edge uses the width and depth of such cuts for this purpose.

My initial interest was for autopistol bullets, but based on what was seen early on, I included two for magnum revolver loads in .357 and .44. There were no surprises (see Table II).

There has been a lot of discussion about the merits/demerits of “secondary projectiles.” Much of that has been about jacket fragments that are shed but has also been expanded to include “prefragmented” projectiles such as Glaser or Magsafe bullets. Jacket fragments have little weight, and small shot used in some loads have a similar difficulty, so penetration is limited.

The petals created by the Cutting Edge bullets average between 11.7 and 16.4 grains, so their size and weight suggest they could become secondary projectiles worthy of consideration. The company reports that separation begins at one to 2 inches, and the various petals penetrate approximately 5 inches radially from center. The base portion continues in a straight line for 12 to 15 inches. That meets the FBI’s penetration guideline, and the diverging tracks from the petals increase the area for potential blood loss. 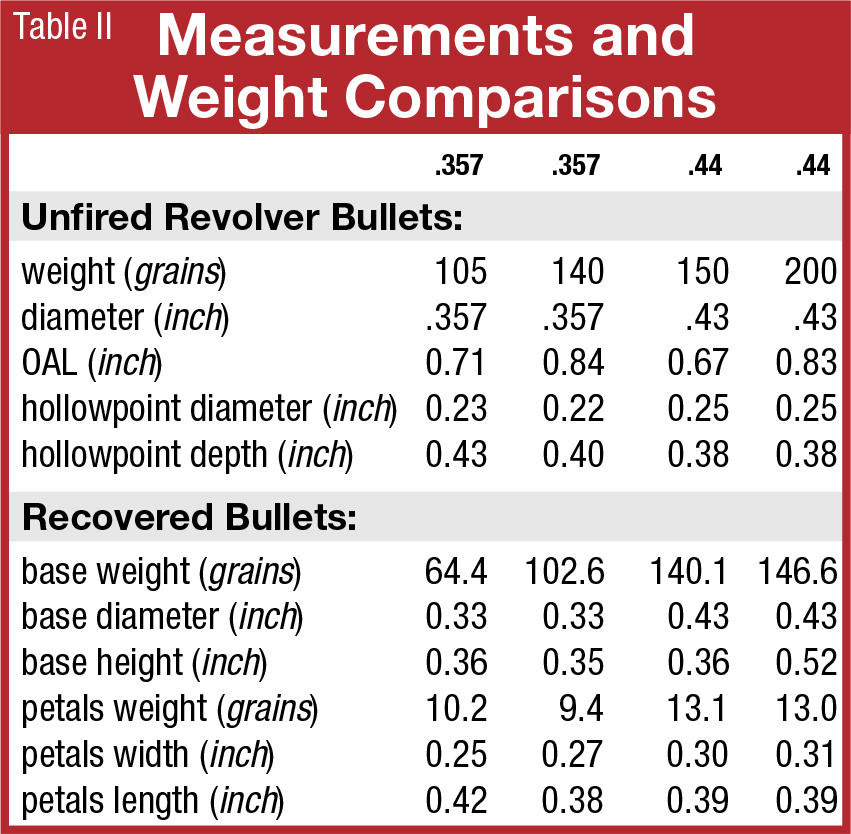 I must say the performance of these bullets has been impressive, and they have done exactly what the company said they would, but I hesitate to call them the mythical magic bullet that would cure any woe or bring unicorns flocking around. Their major drawback is cost. These aren’t like ordinary jackets that are stamped out at hundreds or thousands per minute. They are finely machined and almost too pretty to shoot. The company has handgun offerings from 9mm to .50 caliber. Boxes of 50 bullets have suggested list prices that range roughly from $65 for 9mm to $105 for .50 caliber.