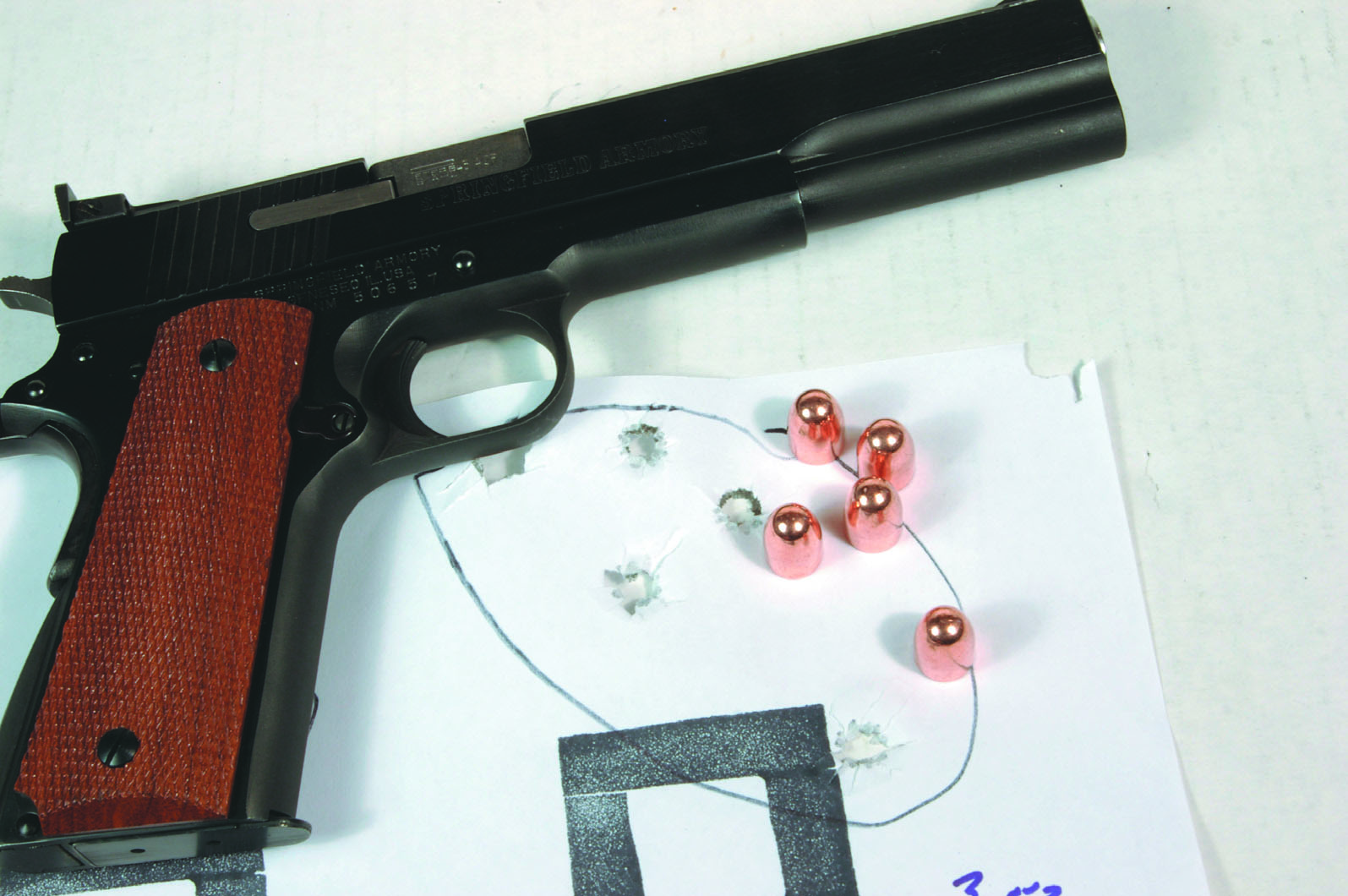 Reloading .45 Auto cartridges is a lesson that paying attention to the details ensures positive functioning of an autoloading handgun. When those procedures

are perfected, a handloader can then concentrate on developing and loading cartridges that shoot accurately in his gun. My Springfield Omega .45 Auto is a perfect example. When I first started handloading for it, a few loads functioned less than perfectly. Once the problem was discovered and ironed out, I shot a bunch of different powders and bullets to find some accurate loads. Now I’m banging away with the Springfield, and no target or can is safe.

Proper die settings are essential for loading .45 Auto cartridges that feed correctly from the magazine into the chamber. A regular die that seats a bullet and applies a crimp to the case in one operation can result in cartridges with varying overall lengths, which can hang up in a magazine. With a Redding seating die set up to seat and crimp in the same step with Speer 185-grain TMJ bullets, the nose of some of my bullets were actually crushed a bit. Plus bullet seating depths varied quite a bit. The reason was the crimp had been applied to the case before the bullets had been fully seated.

The solution is to seat and crimp bullets in two steps. To seat bullets, set the seating die in the press deeply enough that the case mouth is sized down sufficiently to remove the flare from the mouth and hold a bullet at least somewhat securely in the case. Then turn the seating stem into the die to seat the bullet to the correct depth. After all the bullets have been seated, back the seating stem out of the die and turn the die into the press to apply the desired amount of taper crimp. 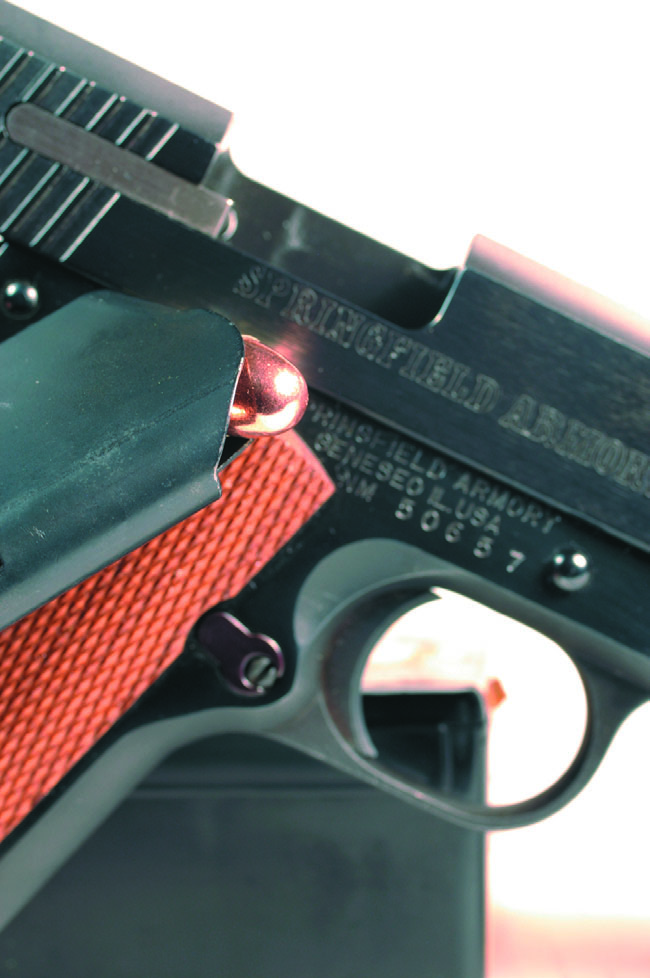 Adjusting the die back and forth all the time is a pain. After awhile I got so tired of doing it I started using a separate Redding taper crimp die. When using an RCBS Piggyback progressive press, I just add the crimp die in the station after the seating die.

Most reloading manuals state .45 cartridges should have only a slight taper crimp applied or no crimp at all. The theory is .45 cartridges headspace off the case mouth and enough of the rim must stick out so cartridges can be positioned correctly in the chamber.

However Carroll Pilant of Sierra Bullets says, “With most autoloading guns the cartridge headspace is actually set by the extractor holding the case head against the bolt face. So case mouth diameter is really not that important.”

When the short, fat .45 cases are fired, they expand outward. So fired .45 cases are usually always shorter than minimum length. Only when the cases are resized do they lengthen somewhat, and that will still be under the maximum allowable case length.

I measured the length of three fired Winchester cases; they were .840, .830 and .800 inch, which is well under the .888 inch standard minimum length. After the three cases had been run through a Redding carbide sizing die, their lengths measured, in the same order, .891, .890 and .889 inch. Those lengths are well under the established .898 inch maximum length for the .45.

Reloading manuals do not state exactly how much a taper crimp should reduce the diameter of the case mouths to a case to keep a bullet in place. Pilant sets the amount of taper crimp by testing a few cartridges to make sure the bullets do not move. He first pushes the nose of a bullet in a case against the bench top. He measures the cartridge to determine if the bullet has been shoved deeper into the case. If it has, he applies a little more crimp until the bullet remains tightly in place. Next he places a cartridge in the bottom of his gun’s magazine and then tops off the magazine. He fires all the cartridges, except the test cartridge. He measures it to see if the bullet has moved. If the cartridge has remained the same length, he considers that amount of crimp sufficient. 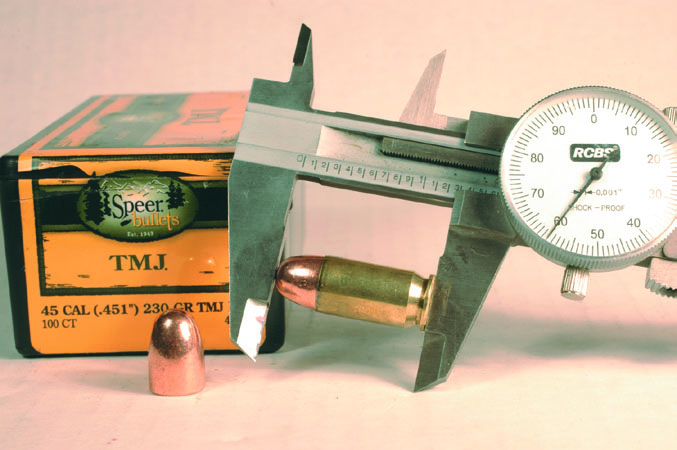 Using the same brand of cases is essential to get that same amount of taper crimp on all cartridges.

“Some brands of cases have thick walls and some brands have thin walls,” Pilant says. “When you size those cases, the thicker ones are going to have a smaller mouth opening than thin cases. That’s going to affect how hard bullets seat and the amount of crimp the cases have.” For instance, my Springfield Omega shot accurately with Speer 230-grain Total Metal Jacket roundnose bullets and 8.5 grains of Accurate No. 5 in Remington cases. Just as importantly, the gun cycled the load without a hitch. I used a Redding Competition Bullet Seating Die to seat the bullets. This die put no taper crimp on the cartridges, only sized down the bell on the case mouths. I thought I had found a great load, so I loaded up 50 cartridges with a mix of case brands with the Speer bullet and Accurate powder. When seating the bullets in the different case brands, there was a definite difference in the pressure on the loading press handle. Some bullets seated with next to no pressure and some with resistance.

“That’s close enough,” I thought. “There’s no need to run them through the crimping die.”

Well, it was almost close enough.

The next time at the range the cartridges cycled into the chamber, but about three cartridges out of every magazine stopped the bolt just a fraction of an inch from fully closing. I finally gave up. I took the remainder of the cartridges home and ran them through a Redding Taper Crimp die. The die put a lot of taper crimp on the cases. In fact the thicker cases required a rather hard downward push on the press handle to apply the crimp. The crimps reduced the case mouth rim diameters to .470 to .466 inch. Those cartridges fully chambered without a snag. However, using all one brand of cases would have made much more uniform cartridges.

Pilant has one more suggestion if your gun fails to chamber cartridges, no matter how much experimenting and head scratching you do. He says cartridges might be too short or long if they fail to fully chamber in your pistol. Cartridges that are too short may rise up as they strip from the lips of the magazine. The upward pressure from cartridges in the magazine underneath the cartridge may exacerbate the climb. The bullet in such a cartridge will hang up on the top of the hood at the back of the barrel. Cartridges that are too long may cause bullets to hit the bottom of the feed ram.

A friend of Pilant’s had feeding problems with the bullets in his .45 failing to fully chamber cartridges and was ready to send it back to the gunsmith who made it. Pilant suggested seating the bullets out just a smidgen. The friend did and the cartridges started feeding directly into the chamber and solved his jamming problems. “Of course, bullets can only be seated out an additional small amount so cartridges still fit in the magazine,” Pilant says. “But it doesn’t take much to alter how they feed.” 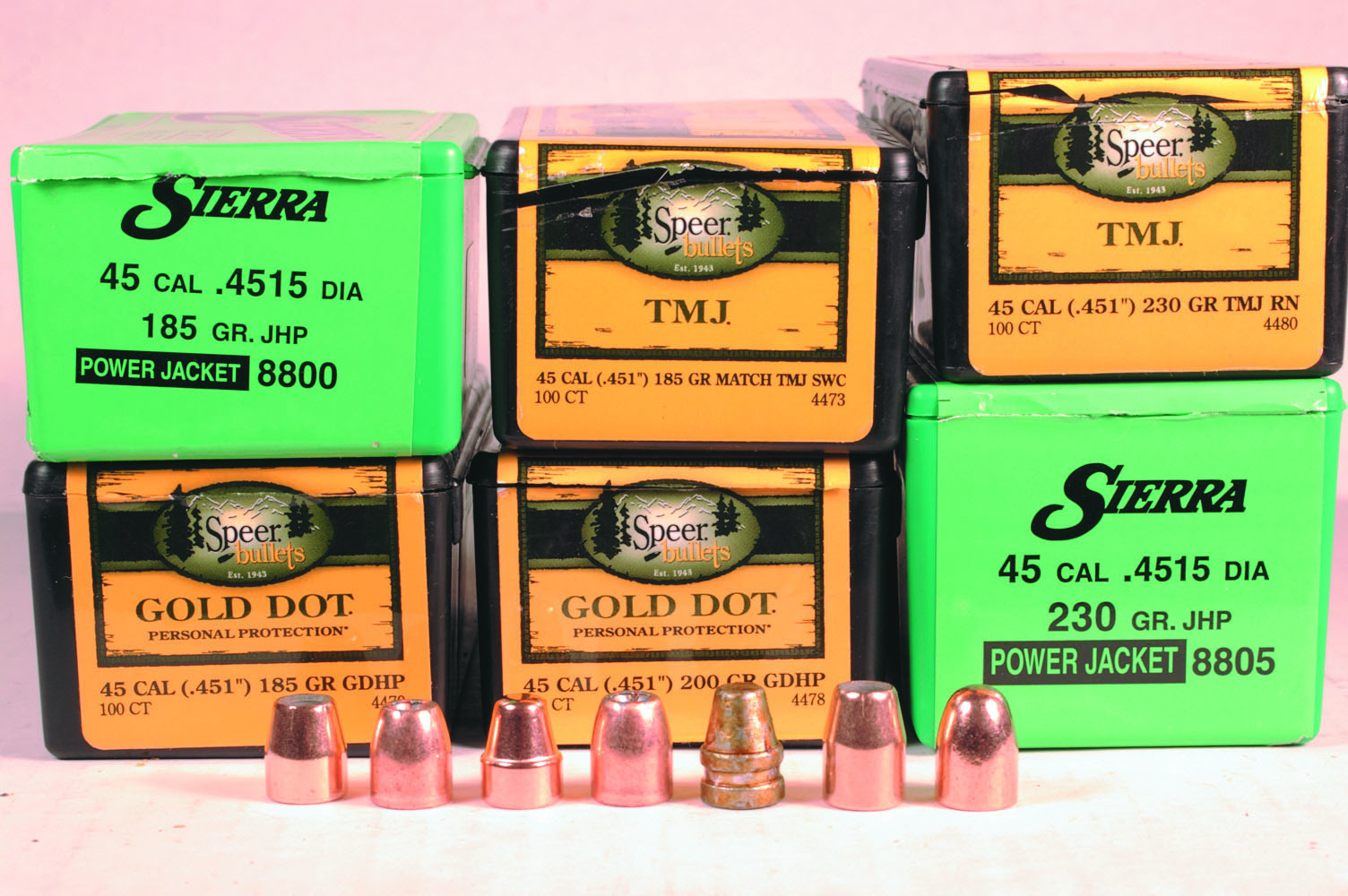 Pilant says .45 Autos cycle well with a variety of bullet nose styles, from the standard roundnose to flatnoses and hollowpoints. “The critical thing, though, is the bullets must be seated so the overall loaded length of the cartridge is correct for a particular bullet,” he says. Cartridges loaded with roundnose bullets may feel like they are freely entering a magazine. If the bullet is seated too far out of the case, though, the nose may drag on the front of the magazine and slow the cycle of cartridges coming up in the magazine. Flatnose bullets may catch on the lips of the magazine. That will make the cartridges hang up slightly. “You’ll be fine, though, if you stick to what the loading manuals suggest for bullet seating depths,” Pilant adds. All the cartridge overall loaded lengths listed for the .45 Auto in the Sierra cartridges cycle properly in 1911- type guns.

No article on reloading the .45 Auto would be complete without including lead alloy bullets. I made a big pile of them cast of wheelweights from a SAECO 200-grainSWC mould. The diameter of the bullets was .451 inch as they came from the mould. That was the finished diameter I wanted. So instead of running them through a sizing die to add lubrication, I saved some time by rolling them in a jar with some Lee Liquid Alox lube. I set the bullets out to dry and then loaded them.

There is no suggested overall cartridge length for a guide to how deeply to seat these cast bullets. I seated them so just the forward edge of the driving band protruded in front of the case mouth. That setting would keep the case mouth rims from hanging up as the cartridges fed from the magazine into the chamber. That overall cartridge length of 1.260 inches has worked well, because I haven’t had a single malfunction of the gun while shooting the SAECO cast bullets. Accuracy has been consistent with all the powders used and right in line and often better than jacketed bullets shot in the Springfield. 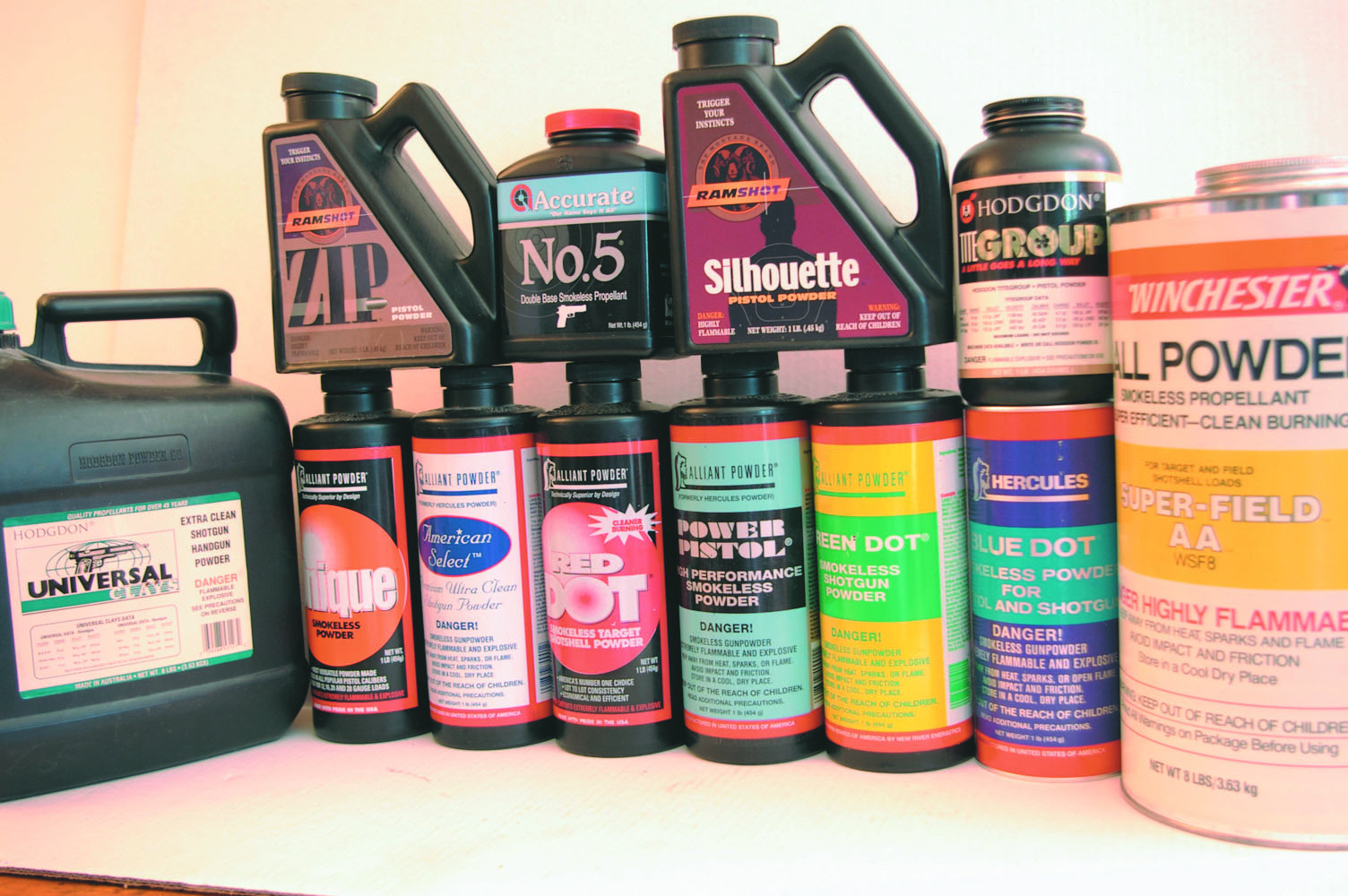 According to several reloading manuals, the Springfield .45 Auto with its 4.5-inch barrel produced somewhat to much higher bullet velocities than the other guns with 4.4- to 5-inch barrels. This is perplexing because the Springfield has two cuts in the top of the barrel at the muzzle that act as a muzzlereloading manual have been set so brake and, if anything, should somewhat reduce velocity.

As an example, the Speer 185- grain Gold Dot hollowpoint bullet with 9.5 grains of Power Pistol had a velocity of 1,231 fps 9 feet from the muzzle of the Springfield. That is nearly 200 fps over the velocity of the same load stated in the Speer Reloading Manual No. 14 for a 4.4-inch barrel. Another example is the Sierra 185-grain JHP that recorded 1,121 fps with 8.0 grains of WSF powder. The Sierra Reloading Manual 5th Edition recorded 1,000 fps for this load from a gun with a 5-inch barrel.

Now the Power Pistol load was obviously too hot for the Springfield. Not only because of its high velocity,but because it slammed the slide back and forth like a barn door in a hurricane. All the other loads I tried and that are listed in the load table (even though most had a higher than stated velocity) didn’t bang the slide back seemingly too hard and mostly produced velocities with low extreme spreads.

The lesson here is to experiment with different powders in your gun. In my Springfield the following powders provided low extreme spreads of velocity and cycled the action reliably with these bullets:

– Accurate No. 5 and Universal

So I’m just getting started loading for my Springfield .45. But by paying attention to the details that ensure positive functioning of the handgun and working up some good powder and bullet combinations, I’m well on my way to a satisfying friendship with the .45 Auto.