If you’re a die-hard paper-patched bullet shooter, you’re undoubtedly familiar with Paul Matthews. His delightfully informative book on the subject, The Paper Jacket, is perhaps the best resource for a reloader interested in utilizing paper-patched bullets with smokeless powder. In the final chapter, he gives a quick summary of what works best for him with what he calls a “practical paper-patched bullet.” Matthews defines a practical patched slug as “a bullet soft enough to guarantee expansion without breakup, as accurate as the lubricated cast bullet in any given rifle and constructed to withstand velocities up to 2,200 fps or a bit faster.” To achieve top performance with these practical loads, Matthews suggests that softer bullets are better, nothing but the patch and its lubricant should touch the barrel, and that “quietly lurking in the background is the belief that the larger the diameter of the unpatched bullet, the better.” In addition to testing bullet hardness, patch type and powder choice, I recently put this quietly lurking belief to the test and came up with some interesting results.

Four big-bore rifles were utilized to test pre-patched bullet size, starting with a .600-caliber wildcat. I bored a smooth-sided cavity in a set of Lyman mould blocks with my small, bench-top lathe and made a series of three simple push-through sizer dies to give a range of diameters. Bullets of 875 grains were cast in lots of varying hardness, patched with two different methods and loaded over various powders. These bullet lots were then shot for accuracy. The results from this first test support Matthews’s belief that bigger is better. 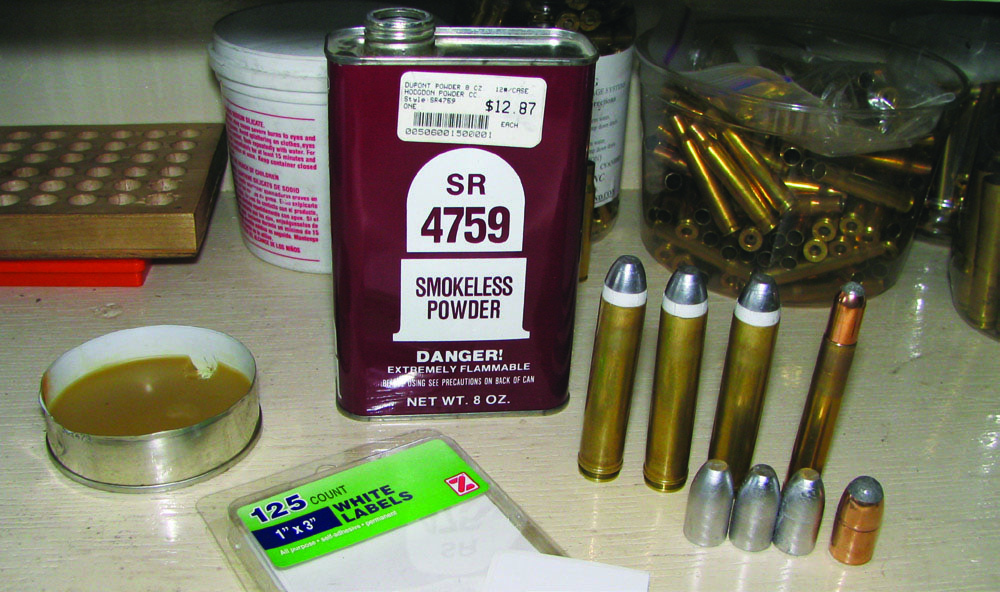 After the .600, it was only natural, in the interest of accuracy, to move to a rifle without such prodigious recoil, and what better choice is there than Matthews’s favorite, a Ruger .45-70? A mould dropping a 380-grain smooth-sided slug was cut, and another series of sizing dies was bored, but this time six diameters were tested. In addition to the other factors tested, that many sizes at once proved to be rather ponderous, and the results had me baffled. Whereas the .600’s graph shows an obvious correlation between accuracy and size, the .45-70’s graph shows nothing of the kind. At this point, I decided to ignore this fact and skip ahead to the .458 Lott.

After the Lott tests, I did a retest of the .45-70 with the three diameters used in the Lott, which shot fairly well. That did nothing to clarify things! By now, test procedures were refined such that the worst loads in the .45-70 were shooting into 3 MOA. This may not seem like much, but when you consider the purposely induced bullet variation, it’s a testament to the quality of the little Ruger. At this point in the tests, I attributed the results to the rifle itself, thinking it just happens to really like paper-patched bullets of any size, but the results of the .375 prompted a second retest of the .45-70.

Before explaining the .375 or the Ruger’s results further, let’s take a quick look at the graph of the .458 Lott’s results. The same 380-grain bullet used in the .45-70 was used in the Lott. Although they share the same bore and groove diameter, the rifling twist rate and throat configuration differ. After plodding through the six diameter test of the .45-70, only three large steps were fired in the Lott. With the three sizes, a clear correlation between diameter and accuracy was shown – bigger is better.