In a recent column, I investigated the relationship between a bullet’s pre-patched diameter and its grouping ability. After testing a series of bullet diameters in four different rifles, two sweet spots were identified: bullets right at or slightly larger than bore diameter and again when bullet diameter approached groove diameter. Due to the difficulties associated with the groove diameter slugs, a pre-patched diameter at or slightly larger than bore is recommended. A simple test of fit would be to try to slide the naked bullet into the muzzle. If it slips in with a slight resistance, it’s the right size. In addition to coming to this conclusion about pre-patched bullet diameter, I also investigated the factors of bullet hardness, patch type and powder choice, hoping to further refine smokeless powder paper-patched loads.

At the end of Paul Matthews’s book The Paper Jacket, he summarizes his findings on what makes a patched bullet perform and starts with the suggestion that softer is better. Much of this emphasis on softness is motivated by the intended use on game, but Matthews surmises that the softer the bullet, the greater the upset and radial thrust upon firing and the better the grip in the rifling. Keeping with the theme of bullet engagement, he also suggests that “nothing but the paper patch and its attendant lubricant should ever touch the barrel,” and that a smooth-sided slug is preferable to a grooved bullet.

If I may add my own conjecture, I think Matthews overemphasizes the role of “grip” in the barrel but appropriately hints toward minimizing bullet distortion and maximizing coaxial guidance as more important. Although one of the biggest benefits of a paper patch is its ability to accurately throw bubblegum-soft lead at velocities upwards of 2,000 fps, the same basic parameters of fit and hardness that govern conventional cast bullet accuracy must also be considered when using patched bullets. Even though it is possible to achieve fine accuracy at 2,000 fps with a 5 Brinell hardness number (BHN) bullet, there’s a good chance these results will require extra effort to attain.

During the mid-1970s, Col. E.H. Harrison and the staff at The American Rifleman worked with paper-patched bullets in the .308 Winchester, .30-06 and .300 Winchester Magnum in the interest of full power with cast bullets. In his March 1977 article “Paper Patched Bullets Come of Age,” Harrison provides a few rules for the shooter using a paper patch to obtain top velocities with poured slugs:

“Cast the bullets of hardness according to the load – for full loads, Bhn 16-20, or slightly softer than linotype . . .; for 2000 fps, about 12-14 Bhn which is softer than Lyman No. 2 metal. Hardness is not critical but must be approximately correct for best results. Very unsuitable metal, of course, will fail.

With a slight shift in hardness, the first rule could apply directly to any lubricated, grooved cast bullet. Bullet strength is an important part of any cast bullet. One could look at a paper patch as a layer of “super lube” that allows higher speeds with softer alloys than are possible with conventional groove/lube cast bullets. The fact that Harrison’s tests were performed in .30-caliber rifles and that he recommended a bullet slightly larger than bore diameter correlates exactly with my own findings in regard to pre-patched bullet size.

In my own tests of bullet hardness, alloys as soft and ductile as 5 BHN roof flashing and as hard as 20 BHN heat-treated range scrap were utilized. A 10, 15 and 20 BHN test for the .45-70 and .458 Lott (stick-on patch, 0.456 inch diameter bullets) revealed insignificant accuracy gains at the harder levels but also showed no drop-off in group size. The graph below traces the correlation between hardness and accuracy of 304 individual groups fired from four different rifles. Although the curve wavers, it does show a clear trend favoring harder slugs. Despite his affinity for soft bullets, Matthews also states: “Usually a bullet slightly hardened with tin will give better accuracy than one of pure lead.” 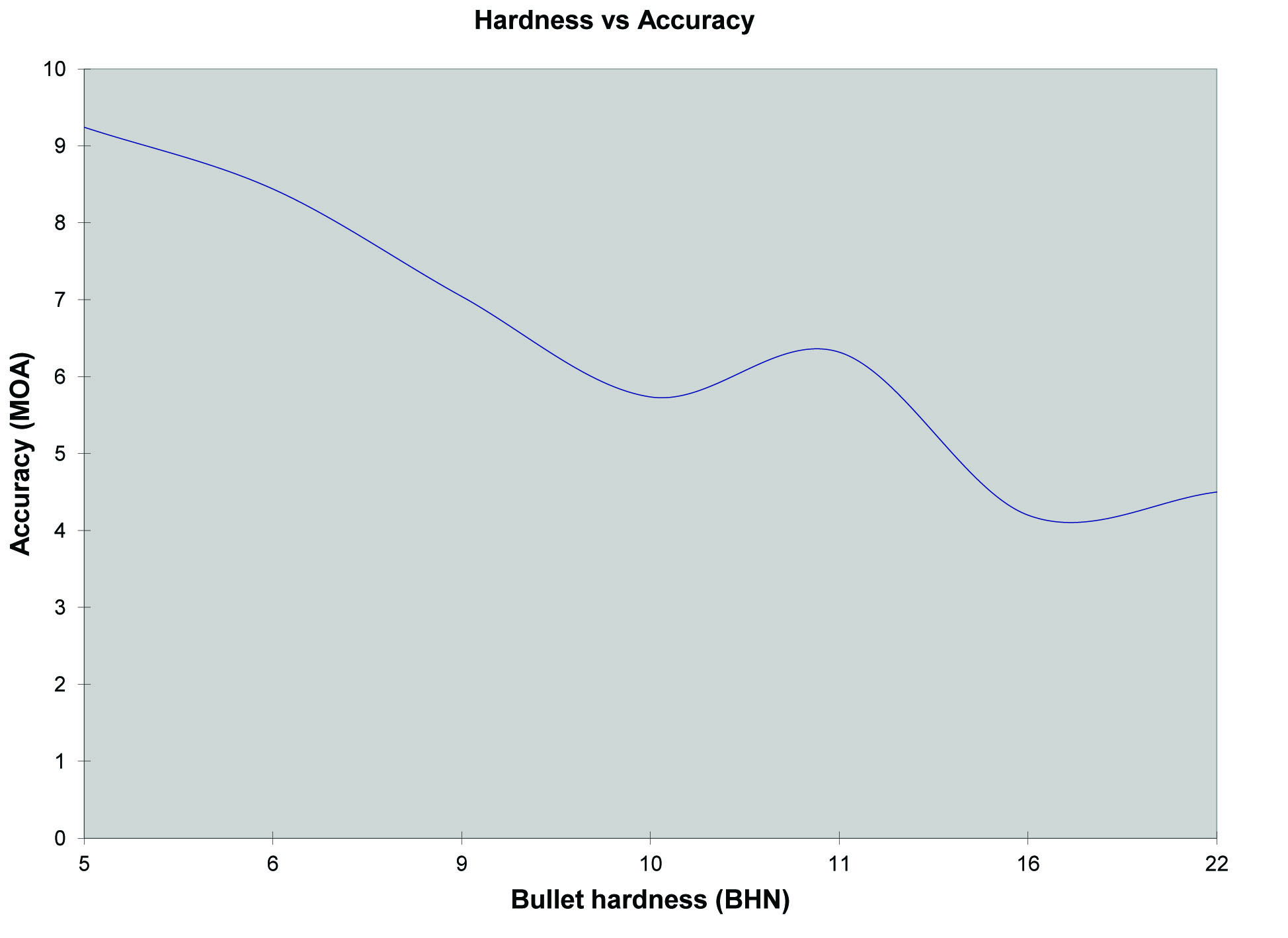 One factor not investigated was patch lubricant. Matthews’s recommendation of petroleum jelly and yellow beeswax lube (55:45 by weight, melted and thoroughly mixed) was the only lubricant used throughout the tests. The patched bullet was spun on the surface of solidified lube, similar to buttering a cob of fresh corn. This was done with bullet and lube at room temperature Careful attention was paid to ensure complete coverage so that a small amount of lube was wiped off the bullet at seating. No problems due to the buildup of excess lube occurred within the seating die, no doubt due to the softness of the lube and the fact that the total amount on each bullet was pretty small.

As an aside, Matthews developed a method of waterproofing and toughening his patches for hunting use, especially in lever-guns, by soaking a heated, patched bullet in melted beeswax, allowing it to cool and shrink overnight, and lubricating and loading it as a normal patch. In my limited tests, this has proven to be an excellent method of increasing the robustness of a hunting slug. Be aware, however, that heating and soaking a stick-on patch can denature the adhesive; therefore, the conventional dried-on patch is recommended for waterproofed patches. These waxed patches performed identically with normally lubricated patches in my limited tests, but I would recommend to those who try this technique to give it a few trial runs before any serious use.