Few firearms are more interesting than the Thompson submachine gun (SMG). While most of us will never own a true Thompson SMG, there are alternatives. In some cases the pride of ownership alone is worthwhile, but the Auto Ordnance carbines are useful for recreational shooting and competition.

The Thompson submachine gun was invented and developed by John T. Thompson, a well-known military man and fixture on the American firearms scene. Thompson is the other half of the famous “Thompson-LaGarde” cartridge tests that determined the proper caliber for a military handgun was .45. Early in his career, Thompson was impressed by the firepower of the Gatling gun and attempted to convince the military to adopt firearms with greater firepower. He ran into a brick wall with the staid conservative military of the day. Colonel Thompson retired from the military in 1914, just on the eve of the Great War. He made a name for himself again in the firearms industry, as his steady hand led Remington to produce thousands of rifles for the war effort, primarily for British and Russian use. Once the United States entered the war, production was turned toward producing arms for U.S. troops.

At his own expense, Thompson developed a fully automatic firearm suited to the needs of trench warfare in Europe. In Europe, stopgaps such as the snail drum Luger and the highly effective Winchester 97 shotgun were commonly used in trench warfare, but what was needed, Thompson reasoned, was a short firearm using the .45 ACP cartridge. Thompson’s Trench Broom hit several snags in development, as neither a gas-operated system nor a straight blowback proved suitable for what he envisioned. What he needed was a retarded blowback system.

The means of achieving a solution was provided by a patent by Naval Officer John B. Blish. The “Blish Lock” was a breech-locking mechanism that could be used with a blowback system. Originally intended for naval guns, the system worked well with the Thompson SMG. The bolt’s unlock in the simple blowback system was delayed until pressure abated and the bullet left the muzzle.

Thompson acquired financial backing, and soon the Thompson SMG was a reality, but it arrived too late for World War I, and the world’s armies were not likely to purchase the firearm in the near future. Just the same, a marketing team went to work in selling the Thompson SMG to the world.

The first and most famous public demonstration of the Thompson came in 1920 at the National Matches held in Camp Perry, Ohio. These were experimental firearms without stocks or sights. The first Thompson SMG had a firing rate of 1,500 rounds per minute and would empty a 100-round drum magazine in four seconds.

Soon Auto Ordnance contracted with Colt to produce the Thompson; about 15,000 were made. Lyman Gun Sight Corporation produced adjustable sights, and at a later date, the Cutts Compensator was added. Sales were disappointing with only 3,000 units sold by 1925.

The National Prohibition Act was a stimulus to Thompson sales. Gangsters purchased the Thompson primarily to guard their wares against other gangsters, and eventually the Thompson figured into quite a bit of gunplay, not only among gangsters but also against law officers. Anyone with a few hundred dollars could purchase a Thompson, at least initially. The industry policed itself, and once sales were tightened up voluntarily among dealers, the Thompson soared in price, with examples bringing several thousand dollars in the underworld.

The U.S. Coast Guard was given the task of chasing rum runners and became the first service to issue the Thompson. Soon after, the U.S. Marines purchased Thompsons, and the big .45s saw action in Nicaragua and Honduras. The firepower and combat efficiency of the design were proven in jungle fighting. Meanwhile, the U.S. Navy convinced Thompson to modify the submachine gun’s rate of fire, reducing it to a more controllable level and to make other modifications, including changing the vertical foregrip to a more conventional type. This became the 1928 Model. In 1932 the army began accepting its first Thompson submachine guns. The 1928A1 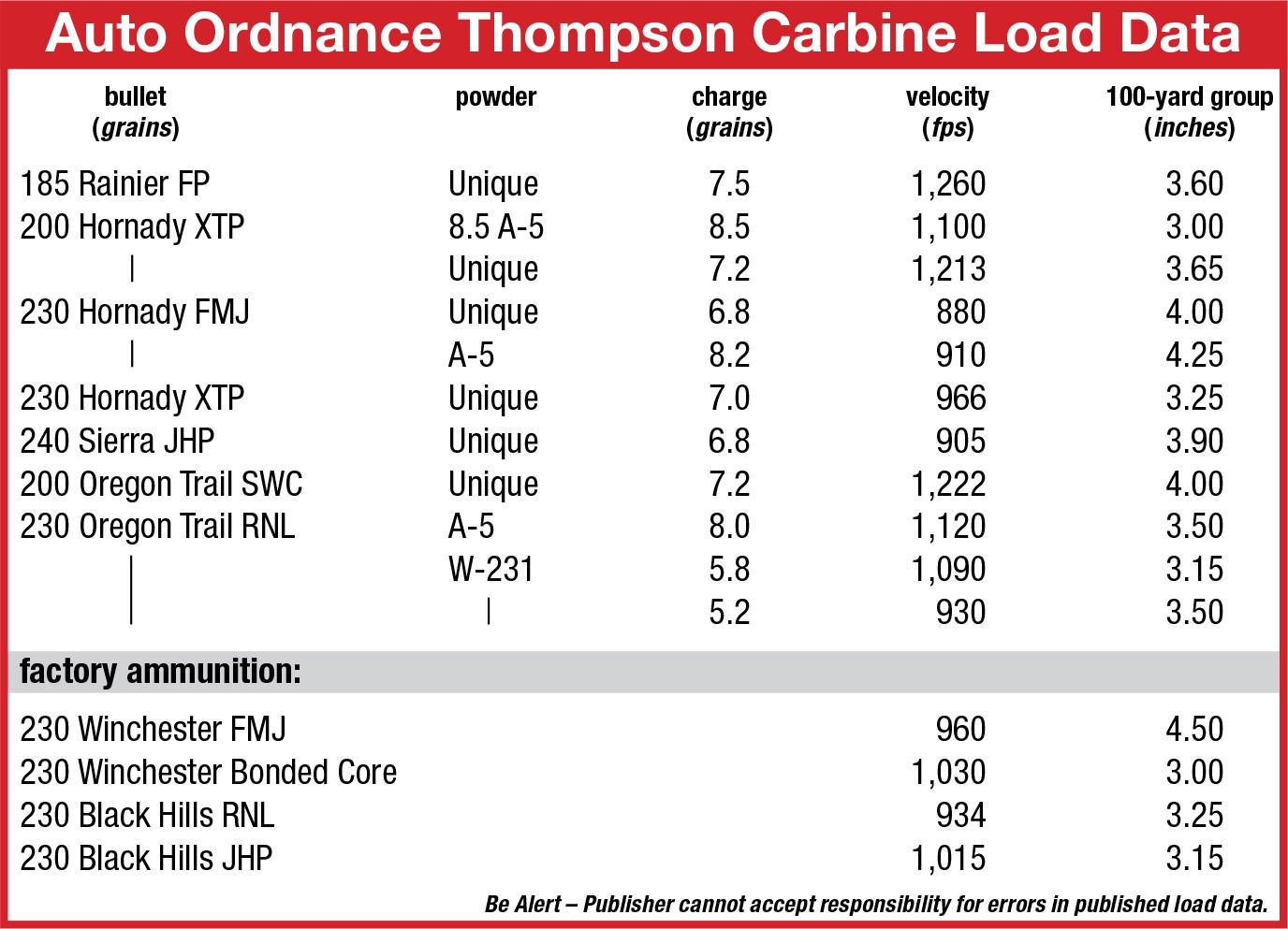 was procured in limited numbers.

Auto Ordnance struggled through the 1930s with limited sales, until 1939. An outbreak of hostilities in Europe brought an initial order of 3,000 units from France and practically open-ended contracts from Britain and the U.S. Colt was overloaded with other wartime production, and Auto Ordnance contracted with Savage to produce the Thompson SMG.

Wartime contracts demanded changes to allow faster and cheaper production. The Lyman adjustable sight was replaced with a simpler unit. Cooling fins on the barrel were deleted. The checkering once found on controls was deleted. Most important, the Blish Lock was eliminated. It was found that the Thompson functioned just fine as a straight blowback. The cocking handle was moved to the side of the receiver. The M1A1 SMG was not as pretty as the finely finished Colt Thompson SMG, but it did the business and served long and well.

After the war, the Thompson was found in the arsenal of many police departments and continued to see use in every conflict up to the Vietnam war and the various Middle Eastern conflicts. Today, a fully automatic Thompson is a true collector’s item, costing as much as a sports car or a new truck.

The Auto Ordnance Thompson is a faithful reproduction of the original. The modern version is in between the superior fit and finish of the Colt 1921 model and the later M1A1. It is well made of good material. The cooling fins and vertical foregrip are intact, and overall it gives the impression of a firearm that is carefully made.

The new Thompson does not use the Blish Lock. That’s fine, since it was incorporated into the action primarily because it was foreseen that the Thompson would one day be chambered for cartridges more powerful than the .45 ACP. This did not happen, although there were experiments with cartridges as large as the .30-06, a very few .38 Super and .30 Carbine examples and a single .351 WSL version. The modern .45 ACP Thompson is well served with the standard blowback action.

Don’t ask where the Thompson carbine fits in the scheme of things. I cannot imagine a role in which another firearm wouldn’t serve better. The longer barrel (16 inches versus the original’s 10 inches) dictated by federal law means the new Thompson handles a little differently than the original. With the lack of a full-auto option, any number of modern self-loading rifles will best the Thompson as a personal defense firearm, but nothing comes close for a pure fun factor.