Some shooters are apprehensive about acquiring an AR-style rifle. That’s understandable since many have no military or law enforcement experience from which they might have been exposed to and trained on the weapon system. Most of the shooters who take the time to see how accurate, reliable and serviceable the platform really are end up purchasing an AR, most often some version chambered for the .223 Remington. ARs chambered for more powerful cartridges, specifically, those based on the .308Winchester case, are becoming more popular. But some handloaders are reluctant to try a large caliber AR because they worry about the rifles being inaccurate or finicky when it comes to handloads. I conducted a small experiment with a DPMS Sportical .308 Winchester just to see how picky it might be. I was most interested in finding out if any special care or procedures needed to be performed in order to guarantee 100 percent reliability and hunting accuracy. 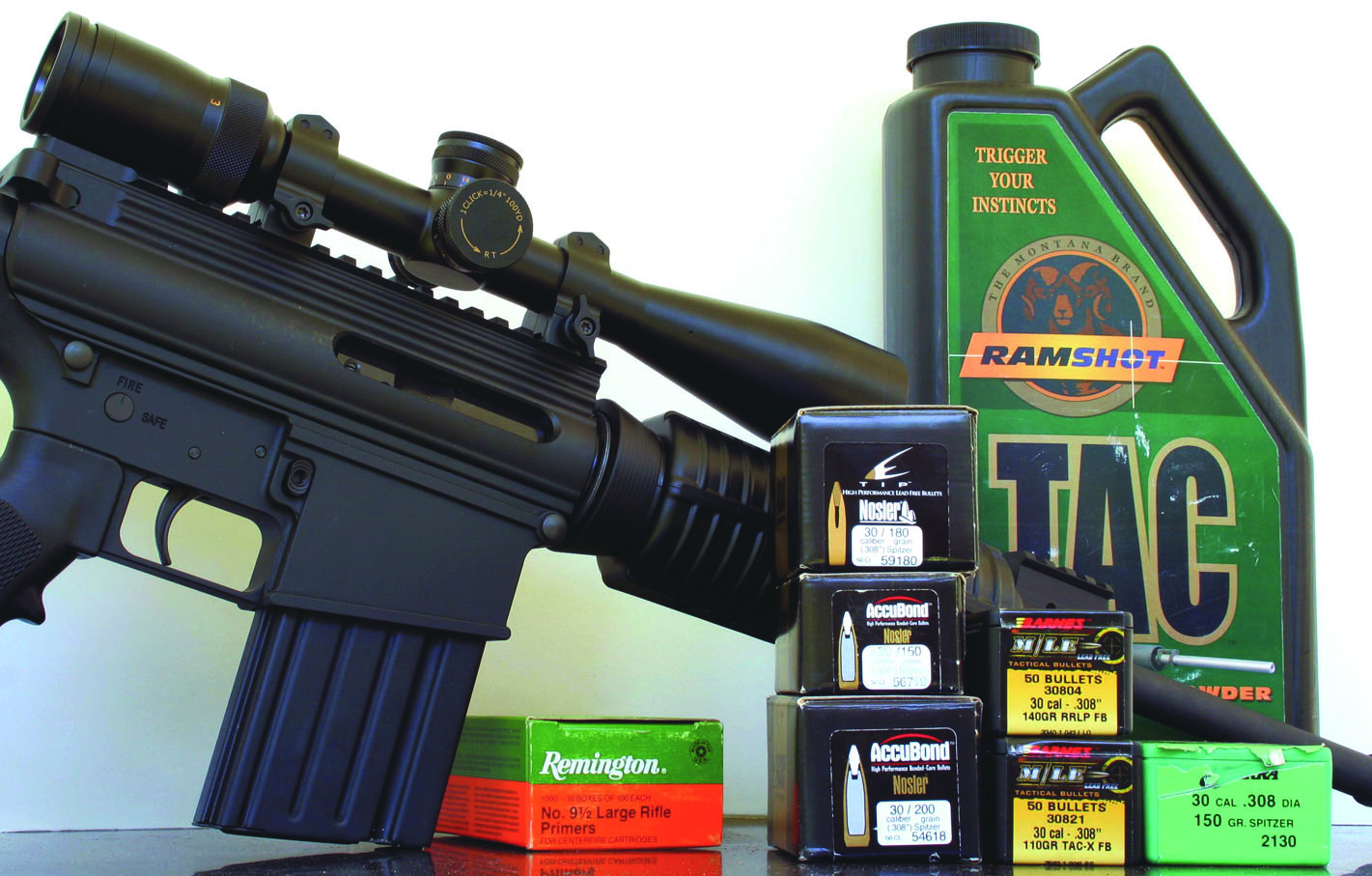 I went through my tub of .308 Winchester brass and picked out 90 Remington cases. Some of these were fired only once and others multiple times in various rifles. Other than ensuring the cases were all from the same manufacturer, I did nothing else to sort by uniformity. I didn’t even trim them all to the same length.

Generally, it is suggested that you apply a crimp when seating bullets in ammunition that will be fired in semiautomatic rifles, especially military-style rifles. This is because the normal recoil cycle is rather violent and can dislodge the bullet as it is being chambered. I wanted to try something different, and since I had not trimmed all the cases to the same length, crimping would be inconsistent.

I rarely use an expander ball when sizing brass, because it’s common for the expander ball to make case necks crooked when it is being pulled out of the case. This does nothing to help accuracy. Instead, I’ll either use a universal decapping die or replace the expander ball with one of a smaller caliber. The result is a case neck that is straighter and slightly tighter – and usually smaller in diameter by about .003 or .005 inch. This tighter case neck increases bullet tension, and I wanted to see if this would be enough to negate crimping.

I did not work up accurate loads and just report the results of those that shot the best, and I didn’t even start with suggested starting loads. To keep things simple, I used Ramshot’s TAC powder for every load and while I generally like to use magnum primers with that powder in the .308 Winchester, I didn’t have any magnum primers and didn’t know where to find any. Six bullets were selected ranging in weight from 110 to 200 grains, bullets suitable for a wide variety of big game animals. Then I consulted Ramshot’s older Load Guide Edition III because it lists TAC loads for the .308 Winchester covering bullet weights between 125 and 200 grains. I extrapolated a load for the Barnes 110-grain Triple-Shock and 140-grain RRLP bullets and selected midrange loads for all the other bullet weights – with the exception of the 180-grain E-Tip. Nosler strongly recommends using its 180-grain bullet starting loads.

Then 15 cartridges for each load – 90 total – were assembled, making sure that the overall length was short enough for functioning in the .308 Sportical’s magazine, 2.8 inches or less. I then mounted one of Weaver’s new Super Slam 3-15x 42mm riflescopes and zeroed the rifle at 100 yards with Federal’s 180-grain Trophy Bonded bullets. By the way, this ammunition printed a nicely clustered 1.09-inch, five-shot group.

A single, five-shot group was fired at 100 yards with each handload using the new Lead Sled Plus as a rest. I didn’t select the Lead Sled because the .308 generates too much recoil for me to withstand; I haven’t passed into gun writer la-la land yet. I did it because I wanted a solid shooting platform that would eliminate as much shooter error as possible.