Many handloaders spend a lot of time on metallic case “preparation,” hoping to make them uniform. The theory is that cases as close as possible to exactly alike result in more consistent accuracy. In general this is true, but exactly how much case preparation it takes to make a difference varies. And exactly which changes make the biggest difference?

I’ve run tests on various case-prep techniques, finding that for the average big game rifle most are a waste of time, and even in a super-accurate varmint rifle much case-prep doesn’t make any noticeable difference. But some prepping definitely does help in any rifle, particularly work on the case neck.

There’s a reason for this. The neck is the “steering end” of the case, which helps start the bullet down the bore. If the neck is crooked, or its walls lop-sided, then the bullet begins its journey pointed slightly sideways. This definitely has an effect on accuracy.

There are ways to compensate for a crooked or lop-sided neck, such as custom seating dies that hold the bullet straighter during seating, or the Bersin tool that straightens crooked-seated bullets. But neither truly makes up for the bad neck. It’s far better to make sure the neck is straight and even-walled beforehand. Then even ordinary seating dies tend to seat bullets straightly.

The most common method of fixing case walls is to “turn” the necks with a tool on your case trimmer. Usually this involves a mandrel slightly smaller than the inside of the neck, along with a cutting tool that circles the outside of the neck, removing a thin sliver of brass.

Neck-turning can help, but not in the way most handloaders believe. When the neck is lop-sided the case body generally varies in thickness as well. When the powder ignites, the case expands more on one side than the other, pulling the front of the case out of alignment with the bore—so neck-turning lop-sided necks doesn’t help all that much. 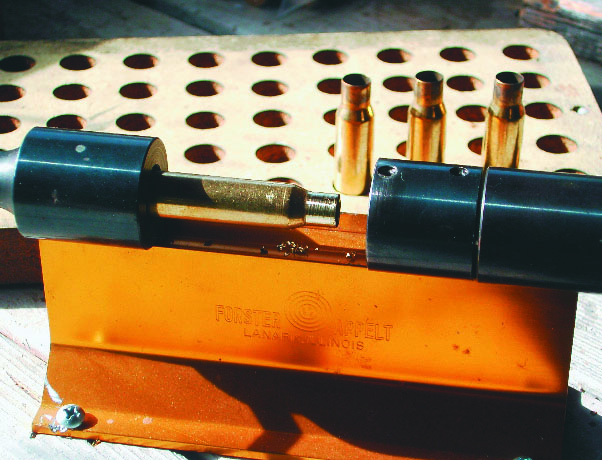 As a result, generally I sort cases for even neck-thickness. An even neck right from the factory indicates the body of the case is also even. In varmint brass I look for not more than .001” in variance, and in most big game rounds .0015”. Most commercial American brass will have 90 to 95% of the cases inside those tolerances, and some European brass (such as Norma and, especially, Lapua) will all be within those numbers. The rejected brass can be used for offhand practice, dummy rounds, etc.

The standard dial caliper that every handloader should own will generally do for this measurement, but a specific case-measuring tool such as the RCBS Casemaster is a little better. When using the Casemaster to measure neck thickness, use a little finger-pressure on the plunger to make sure the measurements are firm. Also, necks of new brass should be run over an expander ball beforehand, to make them round. Otherwise you’ll be measuring the little bumps and dings that come from shipping.

Or you can just place all the brass in a loading block and eyeball the case mouths from above. It’s amazing how well you can spot the lopsided ones, especially with the help of a magnifying glass.

Even after sorting, however, there’s a good reason to turn the necks on some brass. The standard sizing die (either full-length or neck-only) sizes necks smaller than actually needed. The neck is then “bumped up” by the expander ball to a slightly larger diameter. The reason for this arrangement is that brass varies in case thickness from brand to brand, or even lot to lot. The use of an expander ball ensures that the sized necks are all the same inside diameter.

The disadvantage of this method is that pulling the case neck back over the expanding ball often pulls the neck out of alignment with the case body. Your bullets then seat crookedly and accuracy suffers.

If, however, the necks are all the same thickness AND just the right thickness to only need sizing down (thus eliminating the need for the expander ball), brass will last longer and necks will be far straighter when they come out of the die. And your ammunition will be more accurate. This can be accomplished by turning the necks just enough so that they come out of your die with the mouths measuring about .003 under bullet diameter—with the expander decapper assembly removed. This means you’ll have to figure out another way to decap the cases. I use the cheap, rugged and highly effective Lee decapping die.

Some dies feature interchangeable neck-sizing bushings of various diameters to size the necks of a certain lot of brass just so. I use Redding “S” (bushing) dies for most of my varmint loads. These are more expensive than standard sizing dies, but they size the necks straight, and make sizing hundreds of cases easy. But when loading 20 big game rounds, turning the necks isn’t a big deal.

Next month we’ll look at the rear of the case.