Barnes Bullets in the .458 Winchester Magnum

There are two schools of thought regarding the .458 Winchester Magnum. There are those, like the late Finn Aagaard, who consider the .458 strictly as an African cartridge for dangerous game and are only interested in heavy bullets at full power for short-range use. In the other camp are those, like Ken Waters, who feel that with specialized loads the .458 can be sensibly utilized by hunters of lighter dangerous game as well as nondangerous game. There’s no question that the .458 Winchester Magnum was developed with Finn’s Africa in mind; however, Ken Waters is absolutely correct in that many .458s will never see the Dark Continent. Why should their owners be limited to loads with stout bullets and heavy recoil? In Waters’ Handloader No. 92 (July 1981) “Pet Loads” article, he specifically addresses the subject of “taming” the .458 Winchester Magnum for American use and argues the continued success of the .45-70 as a case in point for the popularity of the idea. 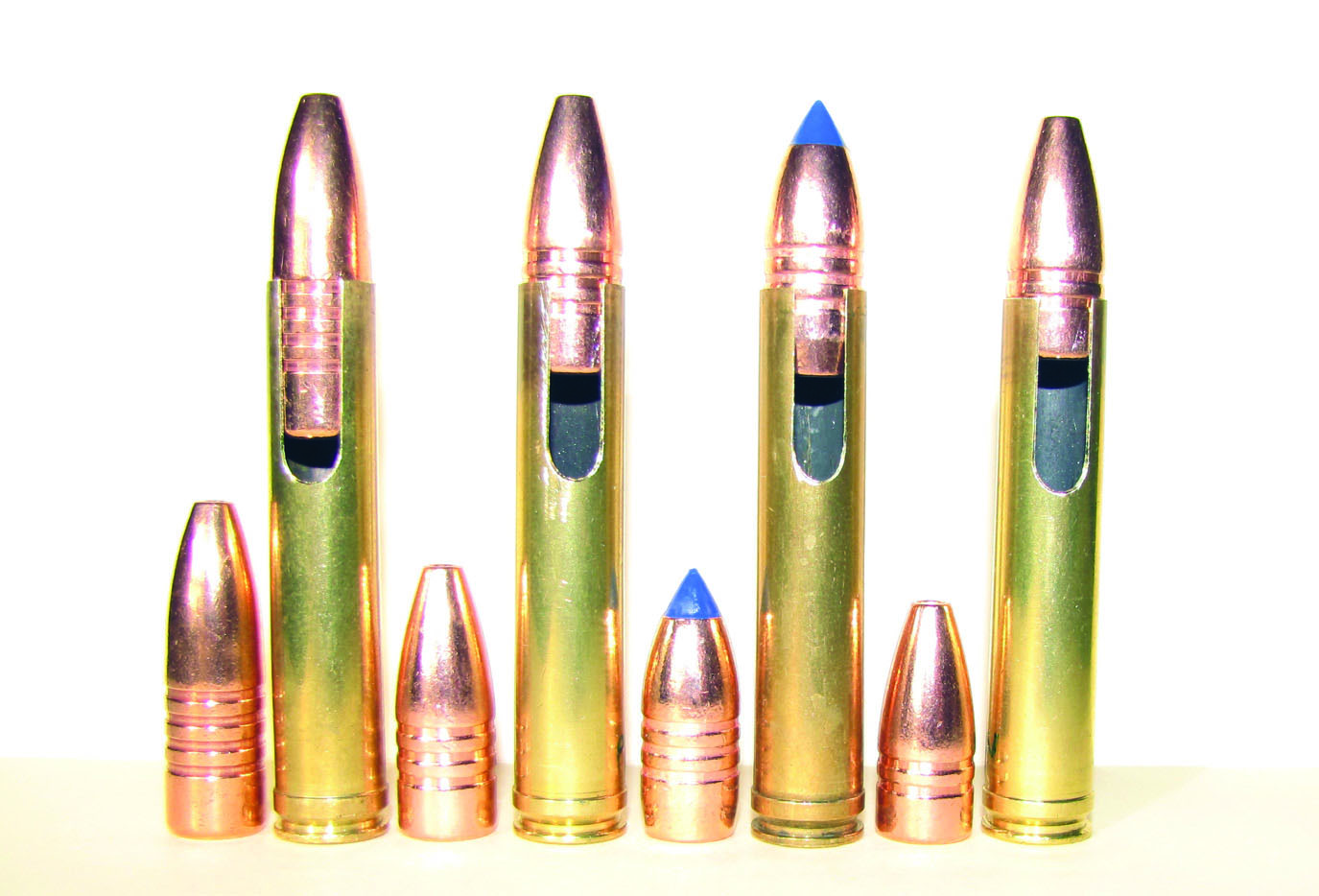 Thirty years ago, the 300- to 400- grain conventional cup-and-core bullets constrained the upper velocity threshold, but not so today, especially with the monometal expanding .458-inch lightweights from Barnes. With this in mind, three styles of lighter X-Bullets were used to see if I could not only tame a bit of the .458’s recoil but also flatten trajectories and improve its versatility.

At one point, Barnes offered a 400-grain X-Bullet but, contrary to what Aagaard reported in Handloader No.147, it did not sell as well as those at the other ends of the weight spectrum. According to Barnes, shooters either want a full-figured slug for the big stuff or prefer to step down to 350 grains or less. Therefore, the modern XBullet, the Triple-Shock X (TSX), comes in four flavors, a pair of heavies at 450 and 500 grains and the lightweights at 300 and 350 grains. Barnes also offers four other lightweight .458-inch monometal expanding bullets, two TSX FNs for leverguns and two 300-grain TSX BTs meant for semiautomatics, such as the .458 SOCOM. Of the three slugs examined in my trials, two were meant for larger cases, the 300- and 350-grain TSX flatbased bullets. Also included was one designed for the .458 SOCOM, the 300-grain TTSX BT.

The 300- and 350-grain TSXes are built for high velocities from large capacity cases, and Barnes tests them in ballistic gelatin up to 2,300 fps impact velocity to ensure no petal loss at that speed. On the other hand, an impact velocity of 1,900 fps is used for TTSX SOCOM slugs. This is not to say that any of these bullets cannot take more speed but that they are confirmed for 100 percent integrity at these impact velocities. With reloading data for the TSXes in a .460 Weath- erby Magnum suggesting muzzle velocities in the 2,900 to 3,000 fps ballpark, Barnes gives these slugs a tremendous vote of confidence. In consideration of impact behavior at maximum speed, I measured the solid shank portion below the hollowpoint of each slug. With the 300 TSX, the shank measures approximately 0.49 inch, comprising around 200 grains (67 percent), while the 350 TSX shank of 0.65 inch shows the same overall weight ratio with 235 grains of solid below the hollowpoint. The 300 TTSX shank also measures 0.65 inch long, but the cavity is much wider than the TSX and opens into six petals that are individually thinner than the TSX petals. With the boattail, the solid shank of the TTSX is not as heavy as the 350 TSX, weighing about 210 grains and has roughly the same weight ratio as the 300 TSX. While these figures do not imply stem-to-stern retained weights, expansion to the bottom of the hollowpoint and total petal loss would represent the worse possible case scenario.

Even so, such shortening should contribute greatly to wound trauma, terminal stability and straight-line penetration. And, even if you run the TSXes at absolutely top muzzle velocity in a .460 Weatherby, both slugs will be down to the 2,300 fps range before 200 yards anyway. From there on, they have been proven to 100 percent weight retention. Again, these are worse case numbers and in “lesser” cartridges, such as a Lott or Winchester Magnum with initial velocities in the 2,500 to 2,700 ballpark, 2,300 fps will occur well before 100 yards. 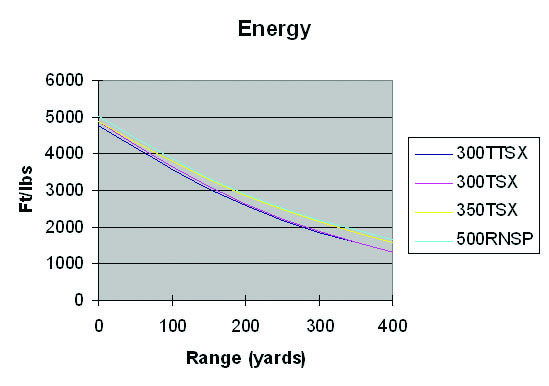 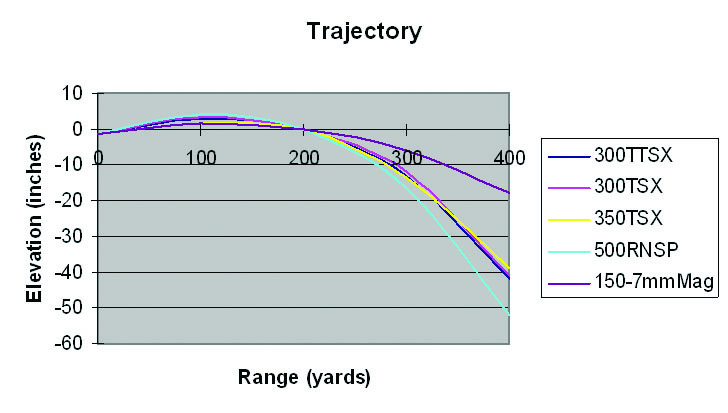 Despite the relatively high muzzle velocities, it is true these bullets shed velocity rather quickly. Those who have no interest in utilizing a .458 Winchester Magnum for much other than stopping large critters at close range would hardly consider this a shortcoming. However, those of us who’d like to use our .458s at longer ranges will have to face the fact that it just can’t be considered “flat shooting” beyond 250 to 300 yards, even with these lighter slugs. One look at the graph illustrates how drop becomes pronounced past 300 yards compared to a rather common 7mm magnum load. Not only that, figures for drift in a 10-mph crosswind are around 12 inches at 300 yards and double that amount at 400. If that wasn’t enough, velocity beyond 250 to 300 yards has dropped off to the point of delivering the performance of some of today’s larger revolver rounds. So much for all that thud and blunder hard off the muzzle of a .458!

The lighter slugs do deliver some useful performance. The Barnes Reloading Manual #3 indicates higher ballistic coefficients for the old-style 300- and 350-grain X-Bullets, but the upgrade to the TSX style includes the move to a nose with a Secant ogive. This creates a very slight shoulder at the junction of the shank and nose radius, and while it robs a little bit of aerodynamic efficiency, it was done in the interest of improving accuracy. If my rifle is any indication, that goal was certainly met. All three types of test bullets grouped very well, especially the 350 TSX and 300 TTSX out to 400 yards from a 9-pound .458 Winchester Magnum (and the prodigious .469-inch funnel-shaped throat) with a 2.5x scope. Barnes has done an excellent job of making an accurate bullet and perhaps the inherent accuracy is also present in the 300-grain flatbase, and it would function better in a shorter-throated chamber.