“Improved” cartridges have been around ever since Lisle Kilbourn cut a .22 Hornet chamber with a sharp shoulder and fired a standard Hornet case, resulting in slightly more powder capacity – and velocity. The process has since been applied to hundreds of cartridges. In fact, some factory cartridges are improved versions of other factory cartridges, notably the .300 Weatherby Magnum, an improved version of the .300 H&H Magnum.

These days it seems that every time we turn around, another cartridge has been “Ackley Improved.” Gunsmith P.O. Ackley experimented with improving various rounds in the 1950s and 60s, all with a 40-degree shoulder. He found that most of the time the process wasn’t worth the trouble, but his name caught on and today is applied to any improved cartridge with a 40-degree shoulder, whether P.O. ever made one or not.

There are advantages and disadvantages to Ackley Improving any cartridge. The most obvious advantage is more powder room, hence higher potential velocity. Just how much extra velocity is possible depends on the original cartridge. Rounds with tapered bodies and sloping shoulders gain the most, the reason the earliest improved wildcats were based on rounds such as .22 Hornet, .250 Savage and .300 H&H Magnum.

Here we must remember that potential velocity only increases at one-fourth the rate of any powder capacity increase. The .300 Weatherby Magnum gains about 13 percent in powder capacity over the .300 H&H, which translates into a 3.2 percent gain in muzzle velocity, everything else being equal. This means that if a 180-grain bullet can safely be pushed to 3,000 fps in a .300 H&H, it can be given about 3,100 in the .300 Weatherby – in an equal-length barrel at the same pressure.

But look up both cartridges in a modern loading manual that pressure- tests each round, and you’ll find the difference isn’t all that much. Nosler’s manual, for instance, lists the top velocity for a .300 H&H 180-grain load as 3,023 fps, while with the .300 Weatherby the top 180 load gets 3,185 fps.

Another advantage of improved cartridges is that, unlike other wildcats, factory ammunition can still be fired if necessary. Also, the 40- degree shoulder of the Ackley Improved rounds cuts down on case stretching enormously, so cases rarely have to be trimmed. This can be a considerable advantage to a varmint shooter, for instance, who often loads hundreds if not thousands of rounds a year.

The disadvantages of the Ackley Improved cartridges start with fireforming. This is easily done in a varmint rifle, where hundreds of rounds of factory or conventional handloads can be shot at prairie dogs, but not so easily (or economically done) otherwise. Also, most Ackley chambers are cut by running a reamer into a conventional chamber. This results in a new chamber that’s slightly loose with factory brass. If a factory round or newbrass handload is fired here, the case is driven into the chamber by the firing pin, then stretches upon firing, often ruining the case. The solutions are to seat a bullet out so that it contacts the lands, thereby holding it against the blow of the firing pin, or to form the case with some fast-burning powder under a loose “bullet” of uncooked cornmeal. Tilt the rifle skyward while loading the chamber, and pop! New case! 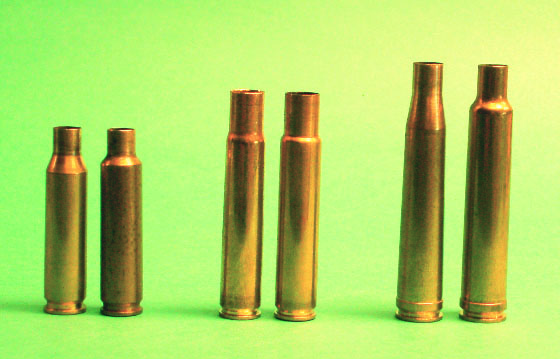 An even better solution is to have the barrel turned back one thread before rechambering, so that the chamber exhibits a slight “crush fit” with new brass. Then any sort of factory or new-brass handload can be fired, and cases will be formed perfectly.

Another disadvantage to improved rounds is that any rechambered rifle loses at least $100 of its value right then and there, since wildcat rifles are not popular among the general public. A custom rifle by some known maker, however, will hold its value better.

The last disadvantage of most improved cases is lack of pressure tested loading data. While a few improved rounds have been popular enough to interest the major bullet and powder companies that publish most loading manuals, they are few, generally limited to the .22 K Hornet and the .257 Roberts, .280 Remington and .30-06 Ackley Improved. So how is the home handloader going to load his new 6mm Remington or .35 Whelen Ackley Improved safely?

It’s actually relatively easy. First, fireform a case with a safe load. This can be a mid-pressure load for the standard cartridge. Now, weigh that case, then fill it full of water and weigh it again. The difference in the two weights is the water capacity of the case.

Now we divide 8 percent by 4 (remember our ballistic rule of one fourth?) and we get 2 percent. This is about how much velocity gain you’ll get out of a 6mm Ackley Improved – provided it’s loaded to the same pressure as the standard .257. This comes to 60 fps in a 3,000-fps load.

Now we start loading fireformed 6mm AI cases. Here we can safely start with near-maximum 6mm Remington data, because the 6mm Ackley case will result in lower pressure. As we test loads with more and more powder, we watch the chronograph carefully, and when our new 6mm Ackley gets about 60 fps above 6mm Remington muzzle velocities (allowing for barrel length), we can assume we’re operating at about the same pressure.

So now you know how to safely use manual data to work up loads for an Ackley Improved cartridge.

Sixty feet per second doesn’t sound like much, does it? Well, it isn’t, but it’s about what you can safely expect in Ackley Improved versions of most modern cartridges with reasonably parallel-sided cases and shoulders of at least 20 degrees. This is because Ackley Improving such a round doesn’t gain very much case capacity. The cartridges that gain the least have the narrowest shoulders. The .35 Whelen Ackley Improved, for instance, gains almost nothing in case capacity over the standard .35 Whelen, simply because there isn’t much shoulder to blow out.

Despite all this, some great gains in muzzle velocity are claimed by folks with Ackley Improved rifles. I know a guy who claims a gain of 250 fps with his .35 Whelen Ackley Improved with 250-grain bullets. But this gain is over factory ballistics of 2,400 fps, and the standard factory Whelen isn’t loaded very warmly. My friend’s Ackley Improved model also has a 26-inch barrel, and he’s loading it very warmly, surely in excess of 65,000 psi. Here almost all the velocity gain comes from extra pressure and a longer barrel, not the almost nonexistent extra case capacity of the .35 Whelen Improved.

All this may sound like I’m down on Ackley Improved cartridges. Well, yes, I am. I’ve owned several, and never found the slight velocity gains worth the disadvantages. Now, if you shoot prairie dogs by the hundreds each year, a .223 Ackley Improved is a great cartridge – not because it gains any significant velocity over the standard .223, but because you don’t have to trim cases. But if you desire more velocity than a standard big game round such as the .30-06 can provide, it makes more sense to buy (or build) a rifle for the next factory round up. Any sort of .300 magnum will produce more velocity than the .30-06 Ackley Improved and be worth more if you want to sell it.