While the popularity of modern “brush” cartridges can be a topic of much lament, the .350 Remington Magnum produces some very useful levels of performance. With power treading on the heels of the mighty .375 H&H and trajectories running neck and neck with the .308 Winchester, there’s no question the .350 can perform. 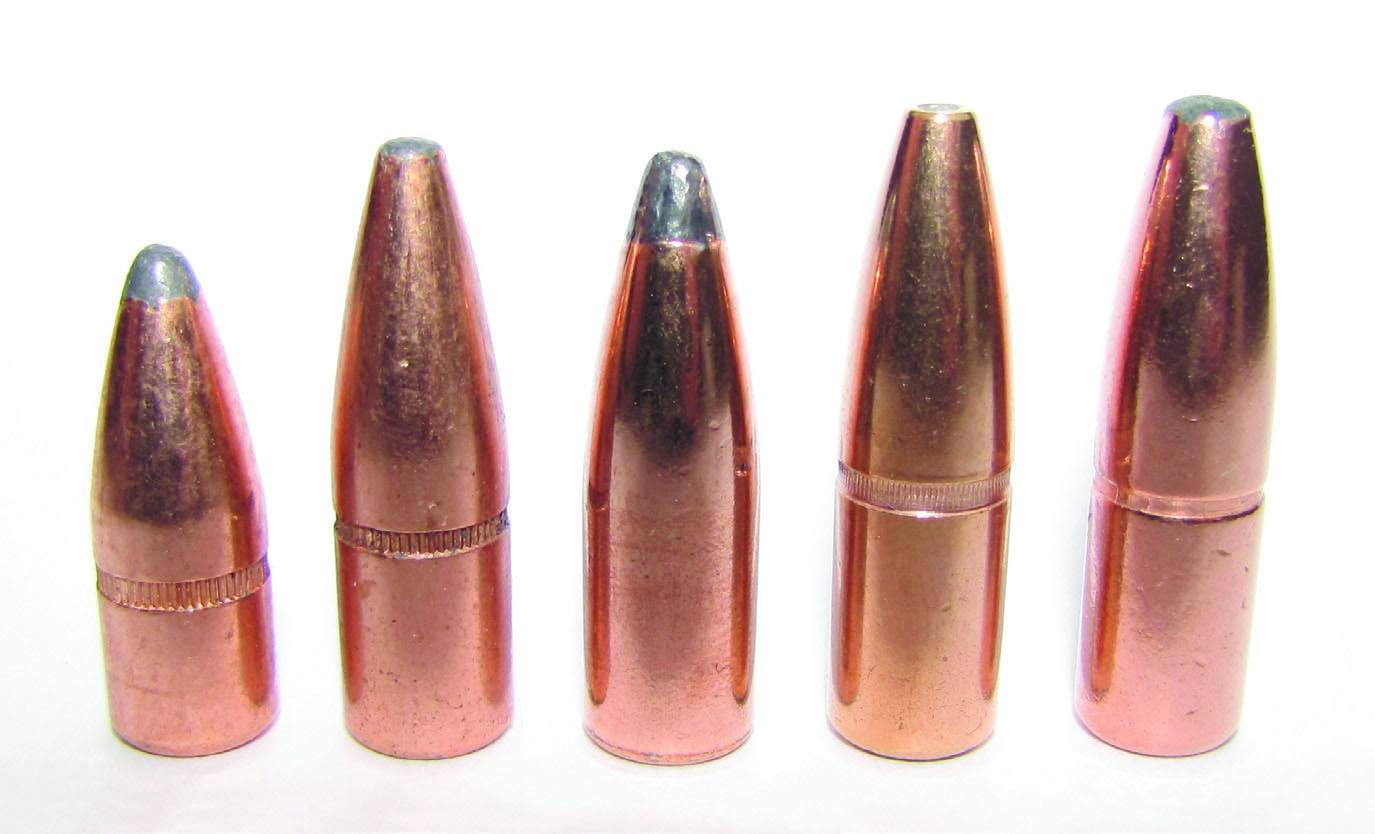 Brought out in 1965 in conjunction with the futuristic Model 600 carbine, the new cartridge started life in a compact and handy “woods-wise” package. Despite these qualities, the .350 Remington Magnum never really gained a large following, even when chambered in more conventionally styled rifles such as later offered by Ruger and Remington. One might argue that a good medium bore, by definition, will be a pragmatic balance of compromises, and that it hardly offers much in the way of Madison Avenue flash and record-setting sales numbers. Undoubtedly, the presence of other fine medium bores like the .35 Whelen, the .338 Winchester Magnum and the old standard .30-06 had much to do with the fate of the .350, but let’s not focus on popularity and talk about performance instead.

When working with a .350 Remington Magnum, one quickly runs into discussions of case capacity and magazine length. Remington’s original offering in the Model 600 carbine was quickly criticized for its short magazine, limiting overall cartridge length to 2.80 inches. That left only 0.63 inch of bullet protrusion beyond the 2.170-inch case length and required deep seating of longer spitzers and heavyweight bullets beyond 250 grains. This led to laments that the reduced case capacity and increased bullet jump resulted in velocity limitations and larger group sizes. Even so, reports indicate that velocities in excess of 2,650 fps with 200-grain bullets and 2,350 fps with 250-grain bullets are to be expected from these stubby carbines. In light of the fact that these numbers come from 6½- pound, 18½-inch barreled carbines, one can hardly complain about case capacity.

Remington’s later offerings in the short-action Model 700 will accepts lightly longer cartridges and, according to Ken Waters, case capacity gains of approximately 4 grains of water. All Ruger rifles chambered in .350 Remington Magnum will also accept rounds longer than 2.80 inches; my recent M77 MKII All-Weather preferred a maximum length of 2.890 inches. At this length, practically all the test loads failed to fill the available powder space, so take the complaints of deep seating and limited capacity with a grain of salt in rifles other than the 600 series.

One thing noticed while handling this short, fat round is that it is not necessarily the overall length perpendicular from bullet tip to case head that determines easy fit in a magazine box but the length along the diagonal from the bullet tip to the edge of the cartridge rim. A round that just fits when fed parallel to the magazine might bind fore and aft in the magazine when tipped. 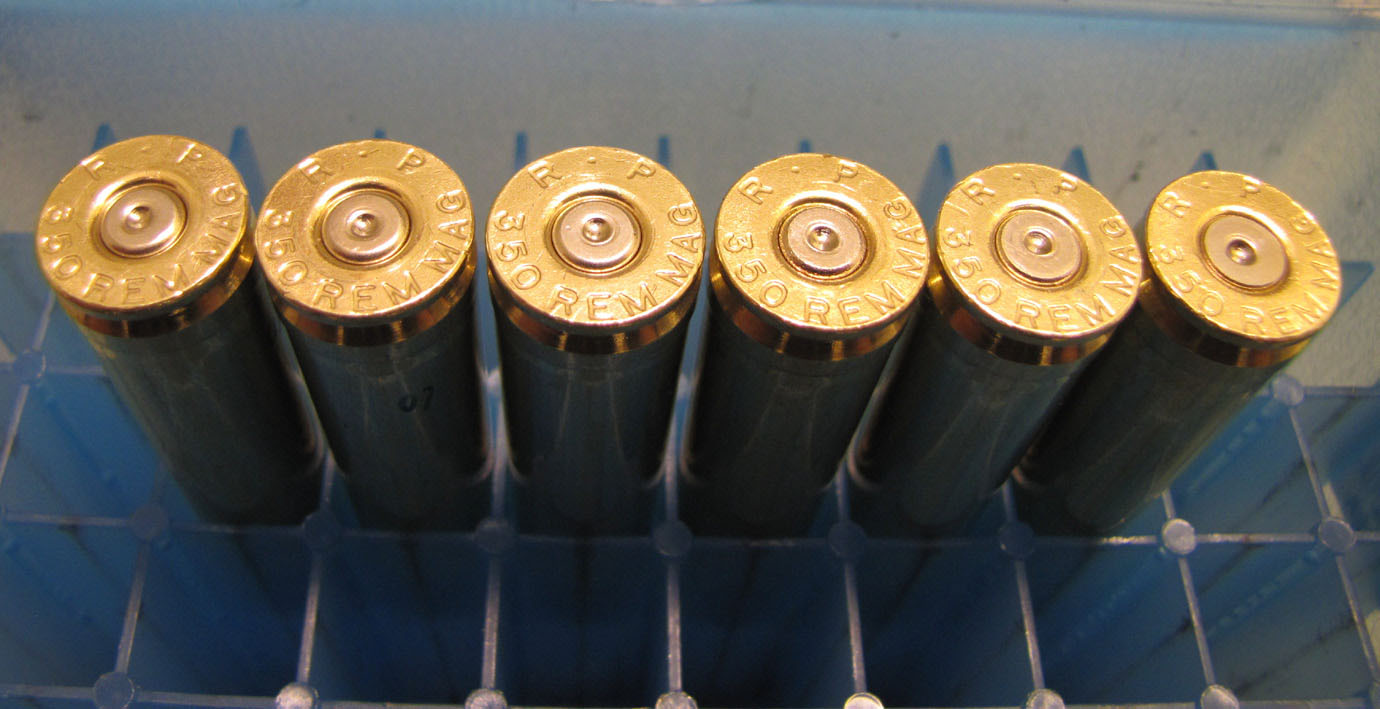 The other area of complaint commonly heard regarding .350 Remington Magnums is that the rifles do not feed well. Although nobody seems to mention it, it is common to all short, fat rounds, especially with controlled-round feed actions like the Ruger. In a CRF action, the case rim must also slip under the extractor during the feed cycle in addition to being released from the feed rails and captured by the chamber. Other than fastidious design and execution of magazine boxes, feed rails and extractors, there is little that can be done to change the fact that fat rounds stack farther out of alignment with the chamber and that shorter cases turn tighter corners in traveling up the feed ramp from the magazine to the chamber. One possible solution to a rough feeding .350, easily done with a Ruger, was recently suggested by Rick Steinhour of Extreme Rifle Works in Arapahoe, Nebraska. A single-feed magazine box utilizing Ruger Scout rifle components might be a slick way to address feeding problems with the .350 Remington Magnum or other short magnums.

Once you work past the issues of limited case capacity and magazine length and have a rifle that feeds well, the .350 Remington Magnum really is a honey. Bullets of .358 inch are readily available, and slugs meant for .35-caliber rifles commonly range from 180 to 280 grains. Lightweight pistol bullets starting at 110 grains running all the way to heavyweight rifle bullets such as Woodleigh’s 310- grain duo are also available in this diameter. Be aware that the SAAMI spec twist is one in 16 inches and may not stabilize the longer slugs, although Ruger’s latest rifles came with a one-in-12-inch twist. The rifle used here has this tighter twist and showed no problems whatsoever in digesting the long Woodleigh 275-grain Protected Points and Swift 280-grain A-Frames.

The .350 has a solid reputation as a good gun for naked lead, no doubt helped by the slower 16-inch standard twist and the parallel throat design that Remington prefers. In the test rifle, the four random loads tried with 165-grain semiwadcutter gas check (SWC GC) bullets printed into 1.5 MOA or less. Be aware, though, that some flat-point bullets will only exacerbate feeding issues, especially when trying out short pistol bullets for plinking loads.

Excellent velocities were easy to obtain with readily available powders. Whatever the reason, the two spherical powders tried, BL-C(2) and H-335, produced a prodigious muzzle flash and blast. Magnum primers did not help. In addition to excessive muzzle blast, loads with these powders failed to fill the case, so they are not recommended. The old adage that the .350 and .35 Whelen are ballistic twins proved to be true, and load data for the Whelen proved to be useful in the .350. No mystery here, their case capacities are identical. As always, begin with starting loads and work upward with caution.

Frequently recommended as top choices for reloading the Whelen, IMR-4064 and IMR-4320 also gave top performance in the .350 test rifle. IMR-3031 proved to be a little quick burning for maximum velocities with heavier bullets but produced top speeds with the200-grainers and gave excellent accuracy with all bullets up to 250 grains. IMR-4198 was tried and abandoned, as top loads left a lot of airspace in the case, lower velocity plateaus and hangfires. Lastly, H-4895 was tried and although it was not always a top producer, some loads delivered good speed and excellent accuracy.

A two-die RCBS set (part number 33707) and properly headstamped Remington brass were used throughout the tests and resulted in the easiest bottleneck reloading of my experience. Cases did stretch a little during load development and were trimmed after five firings, but resizing and neck expansion were almost effortless, perhaps due to the lower angles of the press linkages allowed by the shorter case. The 50- to 60-grain powder charges dropped quickly and easily with no powder granule bridging, and the fat neck on the short case provided unobscured visual confirmation of uniform loadings before seating the bullets.

This particular rifle did not show a direct correlation between primer appearance and velocity/case expansion, so please use caution with this rudimentary indicator of pressure. In the photo, the two center cartridges chronographed higher than reasonable velocities, and case expansion measured beyond an acceptable amount. Pressure ring expansion measurements did climb in a predictable manner with each increase in charge weight, and expected velocity levels were attained. With the listed powder charges and overall loaded lengths (OAL), case capacity was never an issue. Please reduce the listed loads and carefully work upward if limited to a shorter OAL.

Standard primers were utilized for most loads except in the case where Federal 215s were tried with spherical powders. Sinclair’s OAL tool was used to determine a loaded length to give a 0.01-inch jump to the lands when the magazine length permitted. This was done with the Hornady 200-grain Spire Points and Speer 250-grain soft-points. All other bullets were seated to maximum magazine length. The top load with the 200-grain Hornady proved to be 53 grains of IMR-3031, clocking over 2,800 fps and coming in third overall in accuracy. One load with the sleek Nosler 225-grain Ballistic Tip was tried, but the bullet ogive had to be seated below the case mouth to achieve a workable OAL. The resultant poor accuracy led this bullet to be abandoned. The one load tried with the 225-grain Partition proved to be the most accurate of all tested, shooting into .5 MOA, but lack of local availability of this slug precluded further load development before trials were concluded. Top loads with the 250-grain Hornady proved to be 53 grains of IMR-3031 or 56 grains of IMR-4064. The 250-grain Speer produced higher pressures than the same weight Hornady, so 52 grains of IMR-3031 or 54 grains ofH-4895 proved to be optimal with the Hot-Cor. Speer’s classic 250- grain slug with 52 grains of IMR- 3031 proved to be the second most accurate load in the test rifle, consistently grouping under one MOA and would be my first choice for most applications.

Woodleigh’s 275-grain Protected Point is designed for the larger .35s, but the little test rifle was still able to hit the 2,300-fps mark with 52 grains of H-4895 with just over one MOA for the fourth most accurate load. This is a good looking bullet and would be just the ticket for larger game at closer ranges. Swift’s 280-grain A-Frame was also tried, and 52 grains of H-4895 also proved a winner with this bullet. In addition, 53 grains of IMR-4320shot well with the big A-Frame, reaching 2,300 fps and delivering the fifth best accuracy of all loads tested. IMR-4064 also proved to be a good powder with the heavier slugs. It would have been interesting to try other medium burn rate powders, such as Varget and Reloder 15, but time did not allow their inclusion in the tests. In all, the .350 Remington Magnum proved to be well balanced and very amenable to reloading, delivering solid velocities and good accuracy with many combinations.

That said, I think I’d prefer a .35 Whelen for a few reasons, mainly due to the troubles of a short, fat case. Despite the fact that the .350 is very user friendly, well engineered and performs as expected, it only offers something slightly better in the original 18½-inch barreled Model 600. Once you step away from that, even with a short action, you might as well go with a longer cartridge and gain another round or two in the magazine and better feeding. Even with its short action, the Ruger 77 with a 22-inch barrel is 42 inches from butt to muzzle. To put that in perspective, a Winchester Model 70 .375 H&H with a 22-inch barrel is only one inch longer.

One might argue that the bolt throw is much shorter, but throw is only a part of the ergonomics. Smoothness of cycle, including cartridge feed, is just as much if not more important in fast handling. A 22-inch barreled .35 Whelen should offer exactly the same ballistics, is a bit more common and can be made in a rifle of almost exactly the same size and weight as the larger Remington 700 or Ruger 77 .350s. Still, I like the .350 Remington Magnum. This level of performance is the most I can comfortably handle in a lighter-weight hunting rifle. It is a compact powerhouse with plenty of thump and range, easy to reload, accurate and can be housed in a handy carbine. Why it was never more popular is a mystery.